Eva Karasmanis, a PhD candidate in the Department of Biology at Drexel University, studies septins in an attempt to understand how cancer cells arise. When cells fail to divide properly, they become multinucleated, which results in aberrant DNA that can cause them to become cancerous.

“There are checks and balances in place to prevent abnormal multinucleation from happening,” Karasmanis explained. One of the final steps is the physical separation between two daughter cells. While we knew septins were involved in this process, we didn’t know the whole story. We found that septins demarcate the sites of functional assembly of the ESCRT machinery, which promotes membrane fission and the final separation of two daughter cells.”

Although septins are notoriously difficult to work with, Karasmanis said, she is fortunate to have found herself working in the lab of Elias Spiliotis, which has been studying septins for a long time. “We have the tools, we know how to work with septins, we know how to best image them,” she said. 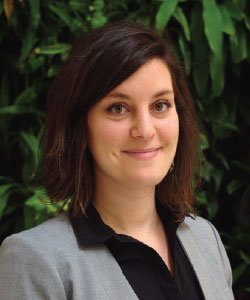 Working in a well-equipped lab, however, is not something Karasmanis takes for granted. While working as an undergraduate researcher at the Democritus University of Thrace in Greece, she recalls washing and reusing pipette tips, sterilizing tools in pressure cookers brought from home, and piecing together equipment from the cast-offs gleaned from more well-appointed labs from other countries. “If we needed something in our lab, we had to build it,” she said.  Joining an American research team was a culture shock, as she recalled her first few days in graduate school. “I ordered reagents and expected to have a couple of weeks before they arrived to plan out my experiments,” she recalled. “Everything I ordered arrived the next day! I thought, ‘What is happening in this country?’”

Although she has now adjusted to the pace and wealth of resources available to American researchers, she has never forgotten the lean times of trying to conduct research in Greece. David Drubin, Editor-in-Chief of ASCB’s basic research journal Molecular Biology of the Cell (MBoC), encouraged her to write about her experiences, as well as those of others who have had to struggle to find lab resources, for the publication. Her Perspective, “Doing science in difficult socioeconomic circumstances,” can be found online in the June 1, 2018, issue of MBoC.

Karasmanis knows that the scientific community is missing out on the contributions of these bright researchers because “research is about the finances, unfortunately,” she said. However, simply sending these labs money can be problematic due to the political nature of the regions where these labs are located.

“The best thing that can happen,” she said, “is for the scientific community, led by organizations like ASCB, to provide a platform where these researchers are encouraged to present their findings and where they can find help to access the resources they need in the countries and regions they choose to establish their labs.”