Creativity sometimes means coloring outside the lines. For Ahmet Yildiz, associate professor of physics and molecular cell biology at the University of California, Berkeley, choosing the unexpected path seems to be a way of life. Now a leading expert in molecular motors and single-molecule imaging, Yildiz has earned the 2017 Vilcek Prize for Creative Promise in Biomedical Science. The award will be presented, along with other Vilcek Prizes, at a ceremony in New York this spring. Yildiz joined the American Society of Cell Biology in 2012 and won an ASCB-Gibco award in 2015. 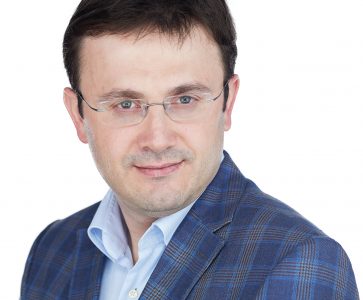 The Vilcek Prize for Creative Promise was established in 2009 as a complement to the Vilcek Prizes to “encourage and support young immigrants who have already demonstrated exceptional achievements, and who often face significant challenges early in their careers.” Perhaps one of Yildiz’ earliest challenges was balking at the expectations that his family in Turkey placed on him.

“In my hometown, most people’s notion of a ‘better’ life is getting a high-paying job. Throughout my childhood, my family wanted me to be a doctor or engineer. However, I thought that pursuing a career that I enjoyed would be more satisfying. I attended a science-oriented high school in Istanbul, which provided me with a solid science and math background, and I decided to become a physicist because of my curiosity for nature and the universe,” he explained.

After graduating with a degree in physics from Bogazici University, Istanbul in 2001, Yildiz chose to move to the United States to continue his academic endeavors. He found American research culture motivating and also highly desirable. In the U.S. for the first time he says he was exposed to a stimulating research environment and the kind of drive he could relate to.

“I was surprised to see 80-year-old professors coming to work every day and running a lab. Students would stay in the lab after hours and over the weekend to finish their experiments. I realized that this is what I was looking for: addressing the questions I am curious about and making new discoveries, rather than doing what you were being told,” he explained.

“[In the United States], I have the privilege to work with excellent colleagues, and students and have access to state of the art research facilities to carry out my work. American research culture also helps me focus on my work, because the community drives me to focus on my results and come up with new ideas, rather than complaining about ‘reviewer 3’ and funding on a daily basis.”

As a physicist, Yildiz brings a different perspective to the world of cell biology, especially to the understanding of single-molecule mechanics and motors.

“I first came across molecular motors when I was interviewing at the University of Illinois at Urbana-Champaign (UIUC) for a PhD. I was highly excited to see that biological phenomena such as muscle contraction and neuronal signaling could be explained using the physical principles I learned in college. I decided to work on molecular motors, because they perform key functions in these processes by producing mechanical work and motion.”

He has also used the principles of physical science to develop methods of imaging that can provide ultra-fine detail of cellular processes. Yildiz developed the FIONA (Fluorescence Imaging with One-Nanometer Accuracy) method in the laboratory of Paul Selvin. He recalls his first “eureka” moment observing the stepping behavior of the motor proteins that cells use to shuttle cargo around. “I still remember how excited my advisor was when I first showed him how myosin walks,” he said.

Yildiz says that working across disciplines has proven to be critical in creating environments where scientific breakthroughs could more easily occur. “When I started the FIONA project, we had limited experience in single-molecule imaging and assaying motors in vitro. We overcame these challenges by collaborating with Taekjip Ha [in single molecule imaging] and Yale Goldman and Ron Vale [for in vitro motility assays], who provided the expertise we needed to accomplish our goals. We optimized the assay conditions to increase the signal of single fluorescent molecules and combined the most recent advances in probe development and camera technology to push the precision in our measurements.” He points out that collaborations with expert biochemists and structural biologists are vital to the success of his lab and says “these collaborations help me ask the right questions in the field, perform the proper controls and better interpret the results.”

Yildiz remains curious about the physical landscape of the cell. In his own lab at Berkeley, Yildiz has made significant contributions towards understanding the mechanism of cytoplasmic dynein, a molecular motor that facilitates nearly all of the minus-end directed motility along microtubules in eukaryotic cells. “About a decade ago, dynein was the least understood of cytoskeletal motors. Due to the recent advances in biochemical and structural studies of dynein, coupled with biophysical studies of its motility, the mechanism of its motility is finally emerging,” Yildiz said.

One of his next challenges is telomeres, the repeating sequences that “cap” the ends of eukaryotic DNA strands and protect them from damage. “These sequences gradually shorten each time the cell divides. After several dozens of cell divisions, telomeres shorten to a length where they no longer function properly, and cells either stop dividing or commit suicide,” Yildiz said. “Telomeric sequences can be replenished by a special reverse transcriptase called telomerase. Using single molecule imaging and manipulation methods, I would like to understand why telomeres lose their protective cap as they shorten and how telomerase accesses telomere ends and elongates these sequences.”

Telomere biology has strong implications for aging and cancer. “I believe these studies can provide fresh molecular insight into the mechanism of elongation and replication of telomeres,” he added.

Another area where Yildiz plans to devote resources is in the biotechnological applications of RNA-guided enzymes, such as Cas9. “These enzymes enable us to label and manipulate specific regions in the genome, opening up new research possibilities, such as observing chromatin dynamics and organization in live cells and controlling the transcription and translation of specific genes,” Yildiz concluded.

Yildiz feels confident that by following his natural curiosity, instead of following the traditional trajectory of his peers, his career has landed on the right path. “Academic life is highly competitive, and it is challenging to get a position and funding. However, science can be particularly satisfying if you are deeply interested in learning something new every day and have the internal drive to figure out how things work in nature.”