What's it all about? Super Resolution Microscopy 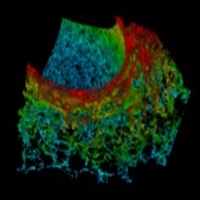 This installment of “What’s It All About?” aims to tackle the exciting field of super resolution microscopy. For centuries scientists have been limited technically by the diffraction limit of traditional light microscopy. Structures a few hundred nanometers apart cannot be resolved with conventional methods. As the name suggests, Super Resolution Microscopy allows us to go beyond this limit and has already earned three researchers, including two ASCB members, the 2014 Nobel Prize in chemistry (Eric Betzig, Stefan W. Hell, and William E. Moerner). This article aims to provide you with enough details to discuss this trending topic with a colleague or consider using these techniques in your own research. 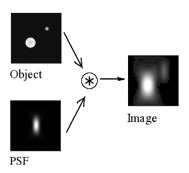 What is super resolution microscopy?
To answer this question, we must first understand why there is a resolution limit in traditional light microscopy to supersede. This resolution or diffraction limit is largely imposed by the diffraction of light as it passes through a glass objective and encounters an imaging specimen (detailed by Nikon’s MicroscopyU here). Due to diffraction, a single point of light (a single fluorophore when using fluorescent labeling) is interpreted by the system as a blur of specific size or point-spread function. Structures smaller than this size or two close structures within this size cannot be resolved. To date, the generally accepted limit using traditional light microscopy is about 200nm. This had prevented scientists from directly observing subcellular and suborganelle phenomena like ribosome function, synaptic vesicle release, microtubule protofilaments, and protein heterodimer formation. All these structures/organelles have now been observed with super resolution microscopy to a resolution of about 10nm.

So how do we get past the limit? In general, superseding this limit involves reducing the size of the effective point-spread function or preventing the fluorescent labels within the specimen from coexisting too close to one another in space or time and making sure they are never closer than the point-spread function size. Both of these principles have been applied successfully and several specific types of super resolution microscopy are in common practice in cell biology. Below we’ll briefly review the common techniques, but for more in depth information see the following review articles:

What’s happening now and where is this field going? 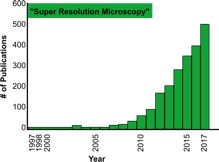 With the seminal papers published in the early 1990s and experimental demonstrations published in the early 2000s, super resolution microscopy is just starting to hit its stride. While not every lab or institute has a super resolution system up and running yet, we’re probably not far off. Individual fields within cell biology are starting to appreciate the application of these techniques for their specific questions. Field-specific reviews are becoming available, including in cytoskeleton biology, bacterial DNA repair, plant cell biology, and membrane biology. Super resolution microscopy has officially moved out of “look what I can do” territory and has become an incredibly insightful tool that can be used to generate new knowledge on a continuous basis. While improvements to this tool can certainly still be made, specifically in the areas of live-cell imaging or pushing the resolution barrier even further, I predict we’ll see more of these super resolution techniques becoming the common form of scientific observation.

Using super resolution microscopy in your own research 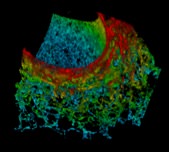