What’s it all about? CRISPR/Cas

Science changes over time. The collective knowledge of a field builds upon itself as new techniques allow us to ask new questions and find new answers. Sometimes as trainees we become ultra-focused on our current experiments and projects, missing these shifts in standards. Have you noticed that a norm for your field changed once you started your postdoc? Maybe you’ve heard of a new technique everywhere but are too afraid to ask about it at this point? Maybe you thought that technique was just a fad, but now it seems like a permanent fixture, and you want to implement it in your own work? As the pace of scientific progress is only set to quicken, we’re here to help you keep up.

The aim of the “What’s it all about?” series is to discuss trending techniques in cell biology, providing a launch point for those wanting to use said technique or for those who just want to be able to hold a conversation about it. This first installment of “What’s it all about?” (WIAA?) will discuss a tool that is seemingly being used by everyone—the CRISPR/Cas system. In the last five years, CRISPR/Cas has been repurposed for many creative experiments, ranging from screening to imaging. Here, CRISPR/Cas will be introduced as a tool for genome engineering, its most widely used application to date.

The CRISPR/Cas system was first identified in bacteria as a mechanism to remember and defend against foreign DNA. When a bacterium first encounters a non-self DNA sequence (i.e., viral or plasmid DNA), it will incorporate unique snippets of that foreign DNA into its genome at a specific locus, called the CRISPR DNA array. This process creates an adaptive and heritable memory of the infectious sequences that a single cell and its progenitors have encountered. When the CRISPR DNA array is transcribed, it produces a CRISPR targeting RNA (crRNA) that forms a complex with a Cas nuclease. If a bacterium then encounters familiar foreign DNA (DNA that is represented within the CRISPR array), the crRNA directed Cas nuclease will cut that foreign invader’s DNA at the specific sites recognized by the crRNA. Creating double-stranded breaks renders the foreign DNA neutralized, and the bacterium goes on to live another day. For many of these systems, the crRNA requires post-transcriptional processing by hybridizing with a complementary trans-activating crRNA (tracrRNA) before it can be effective. In these cases, the crRNA and tracrRNA together help to target the Cas nuclease to specific sites in DNA, where it induces double-stranded breaks.

The major breakthrough came when it was realized that because CRISPR/Cas generated sequence-specific double-stranded breaks, it could be repurposed as a tool for genome editing in eukaryotic cells. In 2012, two significant steps in engineering the CRISPR/Cas system set the stage for this discovery: 1) Gasiunas et al. showed specific retargeting of Cas through changes in the encoded crRNA sequence and that the crRNAs had a 20-nucleotide minimum size; 2) Jinek et al. added that the most commonly used approach with crRNA and tracrRNA could be simplified by fusing them into one RNA (called an sgRNA) still capable of specifying Cas activity. In 2013 two groups building off of these results successfully hijacked CRISPR/Cas for genome editing in eukaryotic cells. Cong et al. demonstrated editing in both human and mouse cells, while Mali et al. demonstrated editing in multiple human cell lines, including stem cells; both used multiple Cas enzymes. Both groups also used CRISPR/Cas as a driver for homology-directed repair and were able to edit multiple sites simultaneously.

Also, check out this short video on how CRISPR/Cas works!

Want to use CRISPR/Cas in your research?

In a testament to the wide-scale impact the CRISPR/Cas system has had, one needs to look no further than the number of both free and commercially available tools. You can even get a kit to do CRISPR editing for the at-home scientist! Some of the first major resources to pop up addressed the crucial step of guide RNA design. Now almost every major biotechnology company has a CRISPR division, including Addgene, Millipore Sigma, Dharmacon, and Thermo Fisher Scientific. Although these company services are available, many labs are still designing and completing their own CRISPR/Cas projects (see below for additional advice).

It is worth noting the variety of experiments that one can do using the CRISPR/Cas system. With the ability to make breaks in the genome, groups have been able not only to create deletions and knockouts, but to make point mutations, add fluorescent tags, modify transcriptional control elements, and possibly treat inheritable human diseases (see below). Conducting a CRISPR/Cas experiment requires careful consideration of what you are trying to accomplish (i.e., deleting something or adding something) and what system you are trying to accomplish it in (i.e., cell culture, different model organisms, etc.). While going into the expansive technical detail on what to consider for each of these experimental outcomes remains out of the scope of this article, we urge everyone to take full advantage of the resources presented here.

Since 2011, literally thousands of papers have been published using some version of the CRISPR/Cas system (see right). It has been used to edit the genome of numerous in vitro cell models and the genome of almost every model organism. Although it has been extensively used, new improvements, and with them, new concerns, are constantly being discussed. 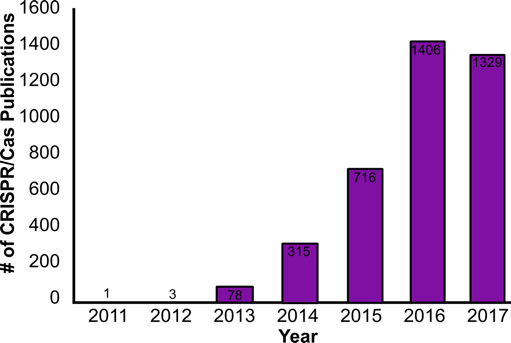 A recent review by Mitsunobu et al. highlights the advancements made in CRISPR/Cas technologies for manipulating genomic information. In short, new Cas orthologs are being identified that confer specific advantages to genome editing. Taking from these natural varieties, new Cas enzymes are also being engineered by different groups for specific purposes, as well as being combined with other systems such as enhancers, epigenetic marks, and deaminases. Of particular interest is improving the efficiency for making point mutations and in reducing off-target effects.

Off-target effects are the major concern for all genome editing tools. It is widely accepted that the CRISPR/Cas system, in particular, could induce insertions or deletions in sites that differ from the target sequence by several nucleotides. In 2015, mice were checked specifically for insertions and deletions after undergoing CRISPR/Cas genomic editing, and only one off-target event was found, similar to what previous studies had reported in human stem cells. More recently, a study in which mice edited with CRISPR/Cas were probed for both insertions/deletions and single-nucleotide variants, the number of off-target effects was staggering. This paper has initiated lively discussion about how we study the off-target effects of genetic engineering and spurred several response articles calling the results into question (see the following preprint responses by Lareau et al. and Kim et al.). Though controversy remains on a number of off-target effects produced by using the CRISPR/Cas system in different contexts, the need to answer this question remains. Understanding the specificity of the CRISPR/Cas system in each context and its ability to produce off-target effects will be the defining step in utilizing this technique to improve human health.

With the successful application of CRISPR/Cas for genetic engineering in almost every model organism, the potential to correct inheritable human diseases has become a reality. To date, CRISPR/Cas has been used to alter the genome of preimplantation human embryos. In 2015 Liang et al. demonstrated the feasibility of this by using CRISPR/Cas to edit nonviable tri-pronuclear human embryos. This summer Tang et al. and Ma et al. have been able to correct disease causing point mutations in normal dual pronuclear human embryos using CRISPR/Cas. These studies showcase the incredible potential of the CRISPR/Cas technique, but also spark an ongoing conversation about the ethics of engineering human genetics.

Thinking about utilizing CRISPR/Cas technology for your genome editing needs? Take some advice from those that have had recent success in a range of contexts: Darius Camp – Postdoctoral fellow in the Tanentzapf lab, creating point mutations in Drosophila; Aaron Bogutz– Lab manager in the Lefebvre lab, creating deletions in the mouse; and Don Moerman – Professor and director of the C. elegans Gene Knockout Lab, who have completed 50+ CRISPR knockout mutants.

What are the pitfalls to avoid?

CAMP: CRISPR is all about target site selection. Use online tools (i.e., http://flycrispr.molbio.wisc.edu) to select the best target site for your mutation, this will increase efficiency and limit off-target cuts. Sequence the target and PAM (Protospacer Adjacent Motif) sequence to make sure your guide RNA will work.

BOGUTZ: Just because you have a deletion in embryonic stem cells doesn’t mean you can make mice. Make sure you do your QC (Quality Control) on the cells, check chromosome numbers, etc. CRISPR-Cas9 works great, but that doesn’t mean you don’t have to do the legwork.

MOERMAN: Biggest pitfall would be in not doing good QC. In our knockout experiments, we use a PCR strategy testing both sides of the site checking for the new target size as well as checking for any residual wild-type DNA.

What did you struggle with the most?

CAMP: Validating my mutants. A lot can go wrong like deletions, duplications, and off-target cuts, and it’s not always easy to detect those events.

BOGUTZ: Chimera breeding. We had some weirdness with transmission rates that we still don’t understand, but a brute-force approach ended up yielding good results.

MOERMAN: Lots at the beginning. Each step we made required its own troubleshooting. We struggled with using the purified Cas9 protein and using the right concentration that wouldn’t clog our injection needles. We struggled with QC and figuring out the best practices for detecting and eliminating off-target effects. Now the number of choices in experimental design is overwhelming.

What would you do differently next time?

CAMP: Pay more attention to using the right CRISPR strategy for the right experiment. CRISPR can be done in a multitude of ways: 1 cut versus 2 cuts, single-stranded DNA donor versus double-stranded, endogenous CAS9 versus exogenous etc. Each way has its pros and cons. Generating a point mutant will not be the same as creating a deletion or endogenously tagging a protein. It is therefore critical to use the right method for your experiment.

BOGUTZ: I would try to validate clones a little more before making our mice.

MOERMAN: The biggest thing that has increased our success rate is spending time on guide RNA design. We built an online tool for gRNA design specifically in the worm. That’s one thing people aren’t paying enough attention to, what works and doesn’t work in their specific model organism. We’re hoping to collect data from our users on which gRNAs have or haven’t worked to see if we can uncover some general principles of their design.

What essential advice would you give to someone just starting out?

CAMP: You don’t want to reinvent the wheel, plan your experiment with excruciating detail then validate it with someone who has already done it.

BOGUTZ: I would say you should just start trying it! You can generate clones quite quickly and easily, and if that’s all you want you’re laughing.

MOERMAN: Find a lab that is doing what you want to do, and tag along. Get the actual hands-on experience in a lab that has it working. It’s not always how you build the CRISPR, but the technical details of how you do it that matter.