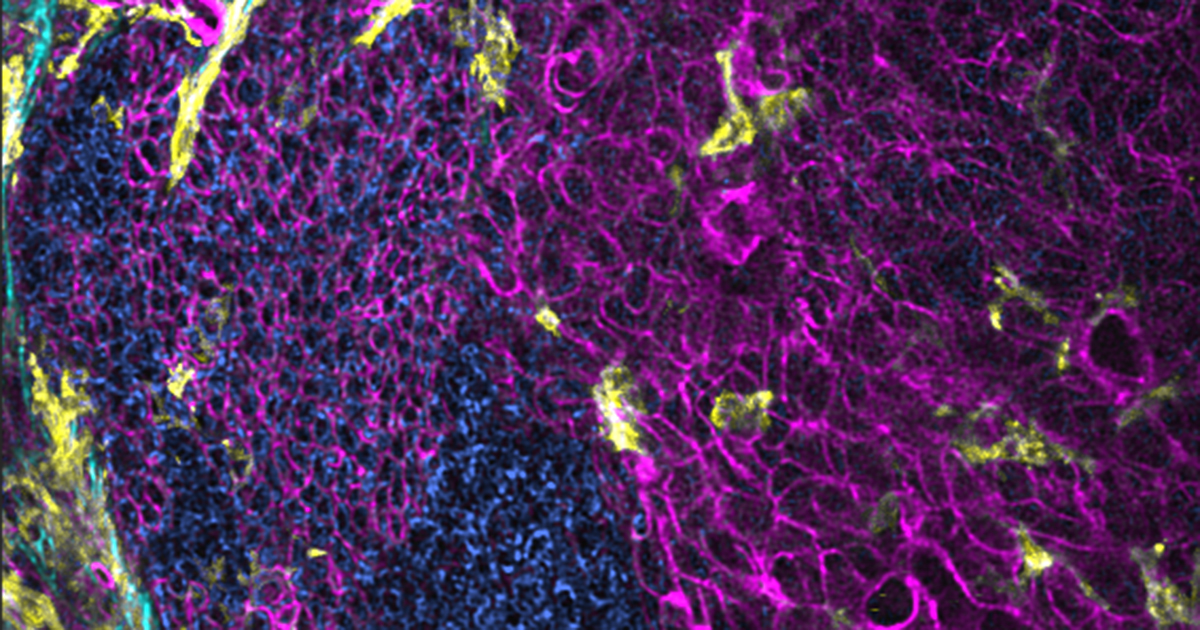 Squamous Cell Carcinoma in the tongue of a transgenic mouse in which myeloid cells and cellular membranes are fluorescently labeled . The image was acquired using multi-photon microscopy. The tumor (blue cells) is surrounded by healthy cells (magenta) and it is enclosed in collagen fibers (cyan). Myeloid cells (neutrophils and macrophages) are in yellow. Credit: Dr. Weiye Wang, CCR-NCI

For a couple of decades now, live-cell imaging using fluorescent protein labeling has allowed scientists to peer into many subcellular processes in cultured cells. But a more advanced technique called intravital subcellular microscopy (ISMic) gives cell biologists the ability to directly observe the dynamics of subcellular structures over extended periods of time in living animals.

“This approach provides the unique opportunity to visualize and study biological phenomena that cannot be properly reconstituted in reductionist model systems,” said Roberto Weigert, whose laboratory developed ISMic. Weigert, who is a senior investigator at the Center for Cancer Research in the National Cancer Institute, and his group have established the protocols and set the benchmarks for working with this state-of-the-art, high-resolution imaging method.

“The main goal of our lab is to better understand membrane trafficking and membrane remodeling,” Weigert said, but ISMic has pushed their observations beyond expectations. Currently the Weigert lab has been able to capture high-resolution still images and videos from 20 different organs in living animals. Some of these images can be seen in the award-winning ASCB Celldance video made in 2016 (www.youtube.com/watch?v=LVPtKhXwRlI). But, he said, his lab has acquired more powerful microscopes since then.

Microscopes constantly run in the Weigert lab, gathering massive amounts of data. In some cases, the ISMic technique can be used for “chronic imaging,” which permits the visualization of a tissue over many weeks in the same animal. Weigert said this approach works best for studying pathological processes like tumor formation, inflammation, or the immune response in organs such as skin, tongue, liver, lung, or kidney.

“This procedure can show the development of a tumor from day zero and catch all its transformations at the subcellular level. You can see a tumor developing cell-by-cell over 24 weeks and going through all the stages,” said Weigert. Recently, his lab has been focusing on neutrophil migration in cancer, inflammation, and infection. “We are finding new and unexpected things that have potential implications for therapies and diagnostics,” he added.

For imaging basic cell biological processes, such as membrane trafficking, exocytosis, rearrangement of the cytoskeleton, and the cell cycle—very fast processes that happen over a short time frame—the Weigert lab uses what they call “acute imaging.” To obtain these images, the organ or tissue to be imaged is slightly decoupled from the rest of the animal through carefully developed surgical protocols. Doing so helps minimize motion artifacts created by respiration or other movements the animal might make while keeping the physiological processes unperturbed, Weigert explained.

In addition to these protocols, the highest resolution images and videos are captured through incredibly high frame rates—one frame every 30–50 milliseconds and in some cases every 2 milliseconds. Improved image capture is also attained with more robust image post-processing software.

Weigert said his lab will continue to push the boundaries of what can be achieved with ISMic. “All these tools allow us ultimately to obtain really high resolution at the subcellular level and discover novel biology,” Weigert said. “Currently, we are following in 4D the dynamics of a novel cytoskeletal structure, which assembles on vesicles. The scale of these structures is in the submicron range, representing the maximum temporal and spatial resolution we have achieved.”