Membrane fusion lies at the heart of many cell functions—from the secretion of antibodies to the release of neurotransmitters. For more than two decades, one view of the process by which membrane fusion occurs has been accepted as dogma; now recent studies indicate that fusion is more complex. These discoveries are being regarded by at least one leading cell biologist as “textbook changing” and could alter how we develop drugs that affect membrane fusion activities. 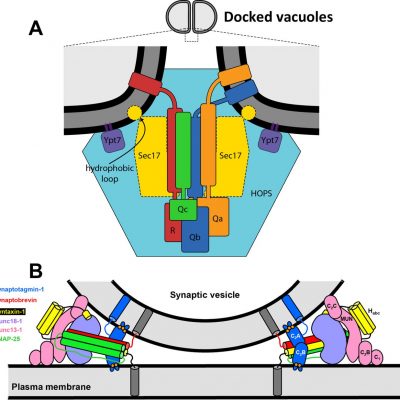 Shared and distinct features of membrane fusion from yeast to humans, and vacuole (lysosome) to synapse. Figure A shows vacuole fusion in Baker’s yeast, where components of the SNARE complex that initiate fusion are represented as R (red), Qc (green), Qb (blue), and Qa (orange) and the proteins that are recruited to the complex to complete fusion are shown in light blue (HOPS), yellow (Sec 17) and purple (Ypt7). Figure B shows the more complex situation in human synaptic vesicle fusion, where the components of the SNARE complex are represented as red (synaptobrevin), green (SNAP-25) and yellow (syntaxin-1), and the additional proteins that may be recruited to complete fusion include those in blue (synaptotagmin-1), lavender (Munc18-1) and pink (Munc13-1). Credit: Mol. Biol. Cell March 15, 2017 vol. 28 no. 6 707-711

William Wickner and Josep Rizo describe a more refined view of membrane fusion in a Perspective written for the March 15, 2017, issue of Molecular Biology of the Cell. Wickner studies vacuole formation in baker’s yeast at the Geisel School of Medicine at Dartmouth, and Rizo studies human synaptic vesicle fusion for the release of neurotransmitters at the University of Texas Southwestern Medical Center. In their article, the authors summarize findings for a number of studies that indicate that the spontaneous creation of a complex of coiled or “zippered” membrane proteins (SNAREs) that draws cell membranes into close proximity is not sufficient to produce physiological rates of fusion. Instead, they say that additional proteins are recruited to assemble this platform and to work with the SNAREs to perturb the membrane lipid structures for fusion.

In the earlier view of fusion, Wickner said, complexes among the SNAREs, or Soluble NSF (N-ethylmaleimide sensitive factor) Attachment Protein Receptors, was the be-all and end-all for fusion, and other proteins only affected the levels of assembled SNARE complexes or restrained them from driving fusion.

“SNAREs are heptad repeat proteins that form alpha helices that wrap around each other (zipper) in a characteristic manner. Fusion has been thought to occur via the spontaneous zipper-like assembly of the SNARE protein complex, which may distort and pucker the membrane, physically forcing the lipids in the membrane bilayer to bleb and give rise to fusion,” Wickner explained.

“Recent studies in systems as diverse as intracellular fusion in yeast and fusion at the human synapse suggest that this well-accepted process is not the whole story. Studies in these systems show that the spontaneous assembly of SNAREs is far too slow; rather, SNARE assembly is catalyzed. The ‘zippering function’ of the SNARES is not sufficient for meaningful rates of fusion,” Wickner said.

Another part of the new view of membrane fusion is that the zippered SNARES serve as a platform to bind additional proteins that insert hydrophobic domains into opposed membranes. This two-step process is actually what is triggering the fusion rearrangement, Wickner said.

Nobel Prize-winning cell biologist Randy Schekman from the University of California, Berkeley. compared the revised view of the role of SNAREs and these additional proteins in fusion to knitting: “The SNAREs are like the knitting needles. The needle itself is not enough to bind a garment together; you need the yarn for the fabric to merge.”

Schekman said the Wickner and Rizo review “distills essential publications that make the case for there being some other ultimate catalyst of fusion… it should be considered textbook changing.”

“Fusion sustains what the cell does to organize itself and to communicate with other cells,” Schekman said. “It’s an integral part of all physiology, so understanding how this reaction ultimately is catalyzed at a molecular level is critical. Furthermore, an understanding of membrane fusion is involved in decisions about how drugs are developed, such as drugs that affect neurotransmitter release and reuptake.”

Rizo noted how significant it is that evidence for this new paradigm of membrane fusion can be found in both the formation of the yeast vacuole studied by Wickner and in the exocytosis of neurotransmitters, which the Rizo lab examined.
“These two systems are probably the furthest from each other in terms of evolution and biology,” Rizo said, “but similar proteins responsible for fusion (homologs) can be found in each system. If something is common in both systems, it is likely to be conserved everywhere.”

Wickner and Rizo agree that further study is required to confirm and completely understand this new version of membrane fusion. As more refined assays become available, cell biologists will be able to piece the process together more accurately.
“These teams have come to the conclusion that other proteins that intervene and that bind to the SNAREs may actually be the things that tickle membranes that cause them to fuse,” Schekman said. “The jury is still out on exactly what they do and how general this is to both systems: yeast and neuron. They point to two other proteins that were known participants in the process but up until now were not considered to be the ultimate step.”

Although Schekman expects some pushback in the scientific community on a challenge to a well-accepted dogma, he said the article should encourage cell biologists to examine its claims and further refine the understanding of this basic cell process.