How to make scientific figures accessible to readers with color-blindness

Proper data visualization is critical for presenting your scientific work in an accessible way. It’s important that people can easily and quickly understand your data. A sloppy scatter-plot or unconvincing immunofluorescence image can lead others to misinterpret or even mistrust your data. Scientists often fail to design figures from the perspective of our readers, particularly readers with disabilities. Although there are many important aspects to designing accessible figures, I want to talk specifically about making figures accessible for people with the most common visual disability: color-blindness.

Why you should care about color-blindness

Color-blindness affects a large portion of the population. As many as 8% of males and 0.5% of females have some form of color-blindness, the most common being difficulty in perceiving the difference between the colors red and green. This means that potentially one out of 12 males and one out of 200 females who read your paper or walk past your poster can’t easily read your figures with certain color combinations.

The genetics behind inherited color blindness are quite interesting, but let’s skip to some practical steps for making your figures more readable. It’s also important to note that color-blindness is different for every person; many possible inherited mutations can change how the eye perceives and interprets different colors. This means that what works to make a figure readable by one person may not work for everyone.

The red/green color combination is classic in science, most commonly used in heatmaps and fluorescence images. For people with normally-functioning photoreceptors, red and green provide good contrast. However, if a person has a mutation in their red or green cone cells, distinguishing these two colors becomes much more challenging. For example, take a look at what a red/green heatmap might look like to people without functioning red or green cone cells: 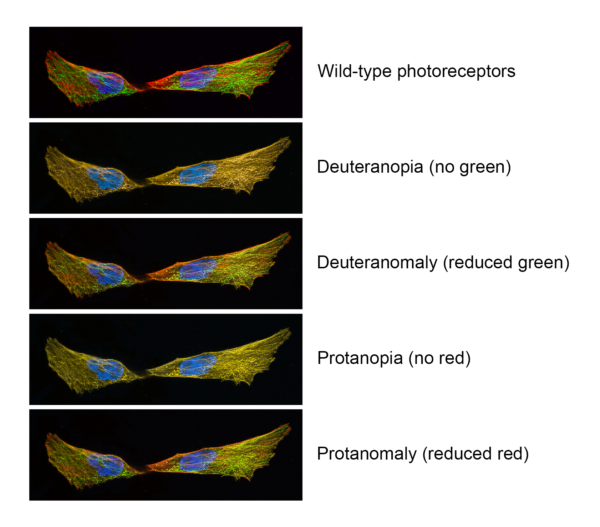 Five versions of an immunofluorescence image of two cancer cells. In the top image, labeled “Wild-type photoreceptors,” actin is labeled in red, tubulin is labeled in green, and DNA stained by DAPI is in blue. The four images below filter the original image to simulate four variations of red/green color-blindness: deuteranopia (no green cones), deuteranomaly (reduced function of green cones), protanopia (no red cones), and protanomaly (reduced function of red cones).

There’s a very simple solution to the problem of unreadable figures: stop using the red/green color combination. Yes, it’s that easy! In fact, many journals now strongly encourage authors to use other color combinations in their figures. Not only will it be easier for everyone to interpret, but new color combinations are also just as (if not more) visually appealing as red/greed. Some alternative two-tone color combinations include green/magenta, yellow/blue, and red/cyan. Even better, only use multiple colors when necessary. You can convey most data just as well using black/white, greyscale, or a monochromatic color scale, so don’t use two colors solely to make your data “pretty. ”.

How to make a better heatmap 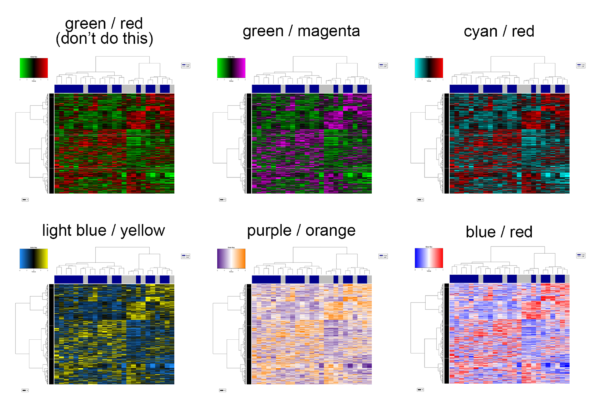 Six different ways to color-code a gene expression heatmap. The first heatmap is in a green-black-red color scale and labeled “don’t do this.” The next five heatmaps are representing the same data but in color combinations that are more easily visualized by people with red/green color-blindness. The color scales on these five heatmaps are green-black-magenta, cyan-black-red, light blue-black-yellow, purple-white-orange, and blue-white-red.

Similar color rules should be used when designing maps, density plots, or other kinds of data that rely on a gradient of color. Avoid the use of rainbow spectrums and instead, use scales such as green/purple or a modified rainbow with no green. Also, include different shapes, lines, or symbols to represent different sample types when possible to make the differences stand out even without considering color.

Similar color ideas apply to microscopy, but it gets a bit trickier to find suitable color combinations when there are three or four colors in one image. A better three-color combination would be magenta/yellow/cyan. For four colors, try magenta/yellow/green/blue. In addition, it is always best practice to show greyscale images for every individual channel next to a merged image. In fact, the human eye is far better at detecting changes in greyscale than in color. This way, there’s no ambiguity as to where each signal is and how strong it is. For example, here’s the same immunofluorescence image seen above but with separated channels and better colors in the merged image: 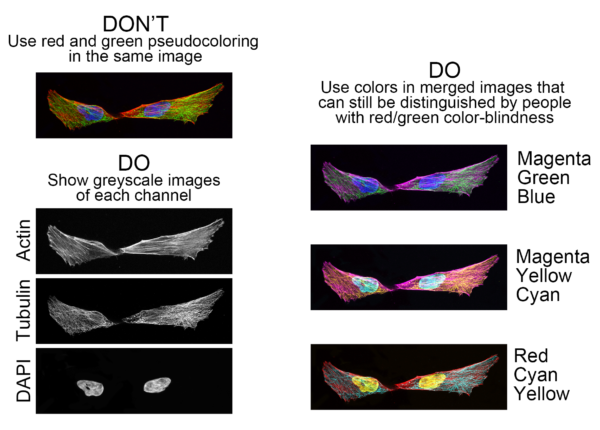 Do’s and don’ts of how to present multi-color immunofluorescence images. In the top left is the image of two cells from earlier, with actin in red, tubulin in green, and DNA (DAPI) in blue. This image is labeled “DON’T use red and green pseudocoloring in the same image.” In the bottom left is a series of three images, showing the greyscale for each individual color channel in the image above. This series is labeled “DO show greyscale images of each channel.” On the right is a series of three ways to recolor the original image in more accessible color combinations. The images are labeled “DO use colors in merged images that can still be distinguished by people with red/green color-blindness.” The three modified color merged images are in: 1) magenta, green, blue; 2) magenta, yellow, cyan; 3) red, cyan, yellow.]

Many tools are available to proof your images in “color-blind mode”. These programs will change the coloring in your image to simulate common forms of color blindness. In ImageJ (a commonly used software platform for microscopy analysis), you can go to Image > Color > Dichromacy or Image > Color > Simulate Color Blindness. In Adobe Photoshop CC 2019, you can go to View > Proof Setup > Color Blindness. In addition, Color Oracle provides a full-screen color-blindness simulator. Using these tools is a great way to check if your data are readable to people with several forms of color-blindness.

If you have color-blindness, I can only imagine the challenge in trying to read scientific data on a daily basis. However, tools do exist to try to re-interpret this data. Assistive software such as Visolve will transform images in ways to help separate or re-interpret colors in a variety of ways. Apps for mobile devices such as Color Blind Pal allow you to re-visualize anything through your phone, which may be useful while at poster sessions or conference talks. (Note: I am not color-impaired, so I can’t personally attest to how well these tools work.)

Importantly, it’s on all of us to make our data more accessible, not only by giving more engaging presentations or increasing transparency and open-access in publishing but also by making sure our data can be seen and interpreted by people with disabilities (including but certainly not limited to color-blindness). Science should be for everyone. Let’s make that a reality through better figures.

Emily Summerbell is a member of the ASCB Committee for Postdocs and Students (COMPASS). She is a postdoc in the lab of Meera Murgai at the National Cancer Institute studying phenotypic plasticity in stromal cells during metastasis. Twitter: @esummerbell 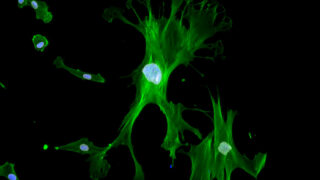