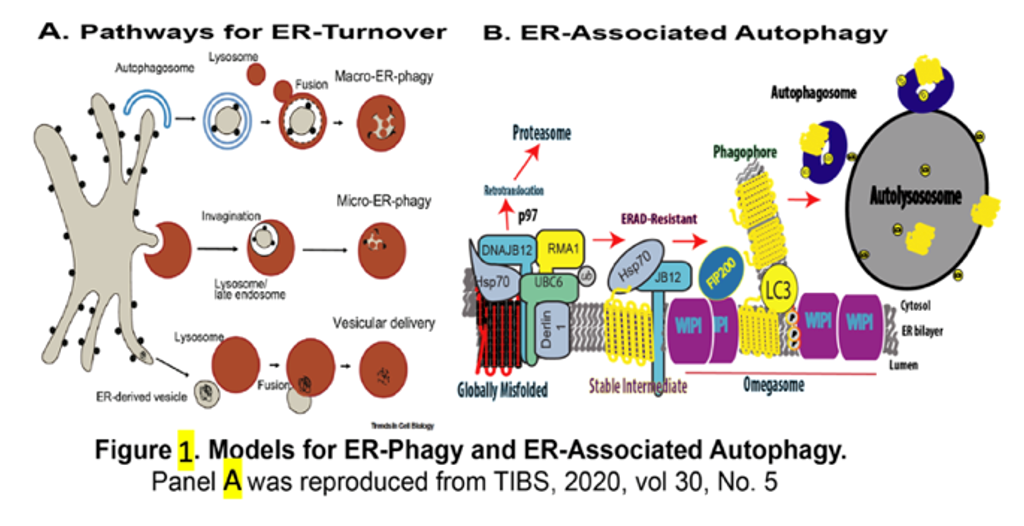 To function properly, a protein must not only be transcribed correctly, it must be folded into the right shape. When proteins are misfolded, things in the cell can go awry. Doug Cyr at the University of North Carolina at Chapel Hill, has spent the bulk of his career investigating the quality control mechanisms in the cell that identify and degrade misfolded proteins, especially those pathways found in the endoplasmic reticulum (ER).

Cyr and his lab published the paper “DNAJB12 and Hsp70 triage arrested intermediates of N1303K-CFTR for endoplasmic reticulum-associated autophagy” in Molecular Biology of the Cell in April 2021. The work centers on two protein chaperones, the transmembrane protein Hsp40 DNAJB12 and cytosolic Hsp70. This chaperone pair work together on the surface of the ER facing the cytosol and triage newly synthesized membrane proteins and either properly fold them or kick them out for degradation. Cyr explained that a particular mutation associated with a cystic fibrosis transmembrane conductance regulator (N1303K) creates a situation where the chaperones can neither properly fold the nascent proteins nor move them out of the ER for the typical path of ER-associated degradation (ERAD). They remain in a destabilized intermediate state with a relatively long half-life (3 hours). These errant proteins become trapped in the ER and begin to accumulate in the ER tubules that become associated with autophagy initiation sites.

For this study, Cyr’s team used a modulator called VX-809 (the drug Lumacaftor), which for therapeutic purposes is able to stabilize a section of the misfolded CFTR proteins so that they can exit the ER and move to the cell surface. But that’s not what happened here. The drug was able to biochemically stabilize the N1303K mutant proteins enough so that they could not be degraded with ERAD.

From the paper: “ER-associated-autophagy is distinct from ER-phagy because ER tubules containing N1303K-CFTR become clients of autophagy initiation machinery that is painted onto adjacent tubules that convert N1303K-CFTR containing tubules into phagophores containing LC3 [the microtubule-associated protein, light chain 3]. Autophagosomes enriched in N1303K-CFTR and LC3 then bud from the ER and fuse with lysosomes that are docked to the WIPI1 rings [a component of autophagy initiation sites] on which they were formed. These results provide new insights into mechanisms by which Hsp70 and JB12 triage ERAD-resistant clients for degradation by ER-associated autophagy.” See Figure 7 C from the paper to visualize this.

Cyr used cell cultures derived from patients with cystic fibrosis and also employed immunofluorescence microscopy and live-cell imaging to help see what was happening inside the cell. Cyr said he and his colleagues used a fluorescently tagged marker for the membrane proteins, which allowed them to look at the early steps in the formation of the ER phagophore. Cyr was able to identify the folding defect caused by the N1303K-CFTR mutant and showed how an ER-associated selective autophagy mechanism was used to degrade it. In the future, Cyr said he hopes to obtain movies at super-resolution of the autophagic transfer of ER-associated-autophagy clients from the ER to lysosomes and to define triggers that stimulate flux through this pathway. Listen to a full discussion on this topic in the May Pathways Podcast.