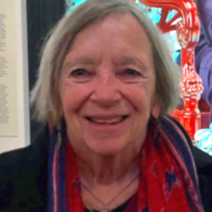 About three years ago, former ASCB president (1995) and Professor of Biology Emerita at Washington University in St. Louis (WUSTL) Ursula Goodenough closed down her lab where she had built a career studying the life cycle of Chlamydomonas reinhardtii.  Today Goodenough, now living on Martha’s Vineyard, hasn’t lost her curiosity about the wonders of nature or her ability to contribute valuable research.

“Somebody told me that when you retire, you shouldn’t really plan anything for the first year and wait and see what happens,” Goodenough chuckled. So, she says, she spent time fixing up her house, joining a choir, doing hospice volunteer work, hanging out with grandchildren, and other “retiree” kinds of things. But it wasn’t enough. As a leader in the Religious Naturalist movement (http://religious-naturalist-association.org), Goodenough found that an immersion in science and nature is also essential.

“Lucky me, I had a lot of data stored on the computer that I brought here. So I started opening it up and looking around. I thought that’d be a lot of fun,” she said. “Turns out research is more in my DNA than I might have anticipated.”

The “fun” data came from her last federally funded project at WUSTL—a grant from the Department of Energy (DOE) to explore the possible use of algae to produce triacylglycerols, precursors of biofuels. 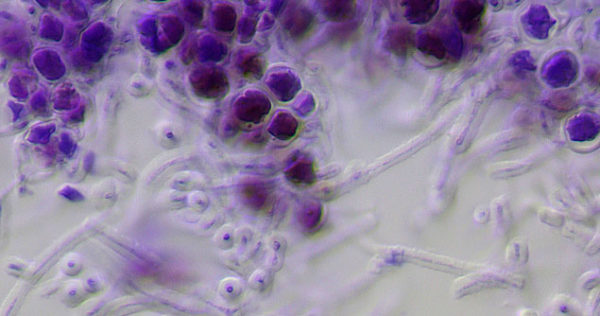 “We and others found out that they make a lot of the right kind of organic compounds, but the problem with using algae this way is that there are just not enough of them, outdoor cultures get contaminated, and harvesting is difficult,” Goodenough said.

During the latter part of that project, she said, “We also learned that lichens made these lipids. The woman that I worked with, Robyn Roth, proceeded with a lot of lichen electron microscopy, and they were beautiful.”

It is these lichen image files that have sparked Goodenough’s current interest. Lichens are composite organisms made up of fungi, bacteria, and either an alga or cyanobacteria, living symbiotically.  As a cell biologist, Goodenough was intrigued.

“Turns out that lichen ultrastructure is terribly difficult to preserve with classic imaging methods, but lucky for us the technique that we used for the DOE project—quick-freeze deep-etch electron microscopy—preserved them perfectly. It allowed us to see the fungi and the algae and bacteria interacting together up close. It’s very exciting.”

Goodenough doesn’t need any funding to support these investigations since the data have already been collected. “I am analyzing the images, reading relevant literature, and writing research papers,” Goodenough said. “It’s kind of like an archaeologist finding a new pile of bones.” The resultant scientific contributions are now being published in Algal Research.

Goodenough’s connections to ASCB reach back to its beginnings. Society founder Keith Porter was her graduate thesis advisor. She values the “steady drumbeat in the society to retain the basic research element,” and hopes that because Cell Bio Virtual 2020 is online she can attend parts of the annual meeting.