“Endosymbiosis” sounds like the title of a science fiction film, and when John McCutcheon explains it, it kind of seems like it could be.  But this beneficial interaction that harnesses the power of bacteria cells to supplement the nutritional needs of animal cells is a relationship that McCutcheon has been curious about since his graduate school days.

“I got really into interactions between bacteria and animals during my PhD (which was on computational biology),” says McCutcheon, who is the Associate Director and Professor of the Biodesign Center for Mechanisms of Evolution at the School of Life Sciences at Arizona State University. “So for my postdoc, I went to a lab that studied the symbiosis between sap-feeding insects—mealybugs, aphids, cicadas, and so on—and bacteria that permanently live in special insect cells. The bacteria supplement the nutritionally poor plant sap diet of the insects. I started working on mealybugs during the end of my postdoc because I thought the bacteria-in-bacteria structure of their endosymbionts was really cool.”

Bacteria are not only augmenting nutritional supply of their animal hosts, they are providing genetic material through horizontal gene transfer (HGT). However, McCutcheon explains that it’s not the same bacteria that now live in the insect cells that transfer the genes. There’s a complex supply chain with multiple players. 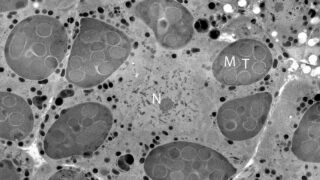 “It’s … complicated,” McCutcheon said. “The endosymbionts are losing genes, yes. But in general, the bacteria that end up donating genes to the insects are not the nutritional endosymbionts, but rather other bacteria such as Wolbachia. Wolbachia as a source of HGTs makes sense because Wolbachia’s whole game is to control the reproduction of their hosts, and so they have close interaction with the germ line. So the endosymbionts lose genes, and they are complemented by HGTs on the host genome, but these HGTs come from other bacteria.”

Not only does the process involve multiple players with specific roles, but these endosymbionts are periodically swapped out, he says.

“The whole thing is complicated further by endosymbiont turnover,” McCutcheon explained. “A new endosymbiont comes on board (replacing an old one), and loses genes in response to the genes that are already there in the symbiosis, and the whole thing becomes integrated again. The effect on the insect is unclear. There doesn’t seem to a major one; some of the most ‘successful’ mealybugs—in terms of being plant pests—have both very old and very new endosymbionts.” hello

What can an understanding of this endosymbiotic relationship between animals and bacteria that are serving the function of organelles tell us about human cells? Do humans have anything comparable to this endosymbiont relationship?

“The closest analog to what we see in the endosymbionts of sap-feeding insects are the eukaryotic organelles derived from bacteria, the mitochondria, and chloroplasts,” McCutcheon said. “And, of course, humans have mitochondria. The way I think of ‘organelles’ are just as very old bacterial endosymbionts. I think these insect endosymbionts are interesting because they have turned out to be sort of a missing link between intracellular pathogens and mitochondria, and have shown that there is a repeatable and stereotypical process that happens when bacteria become permanent residents of eukaryotic cells.” 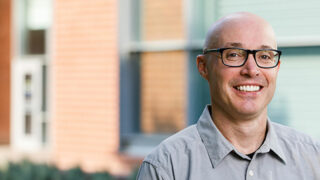 McCutcheon recently shared these fascinating findings during a Subgroup “When Branches of the Tree of Life Meet: Cell Interactions between Organisms” at Cell Bio Virtual 2020. Surprisingly, it was his first time attending and presenting at an ASCB|EMBO meeting.

“It was a fantastic experience,” he said. “I was originally trained in biochemistry and genetics departments, so I know and appreciate that way of looking at biology, but I’ve mostly been doing and thinking about evolutionary biology for the last 14 years. So, honestly, I was a bit nervous for my first ASCB meeting. But it was awesome. There were a ton of talks I was interested in (too many, actually), and three or four whole sessions with an explicit focus on evolutionary cell biology. I made several great connections. I fully expect to attend every ASCB annual meeting going forward. My goal now is to publish a paper in Molecular Biology of the Cell.”

McCutcheon still has a long list of fundamental cell biology questions to answer, so it’s a good thing he finally made it to an ASCB|EMBO meeting.

“How does a bacterium transition to becoming a ‘permanent’ resident of a host cell? How does the host endocytic pathway remodel itself to maintain a bacterium for hundreds of millions of years? How are genes encoded on the host genome as HGTs transported back into the endosymbiont?” he says are just a few riddles that need to be solved. “I’ve spent most of the last 10 years thinking about the genomics of endosymbiosis. That work has led to questions that are more related to eukaryotic cell biology.”

Whether or not any of his discoveries will become the themes of science fiction movies remains to be seen. 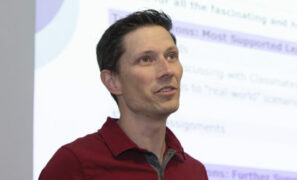