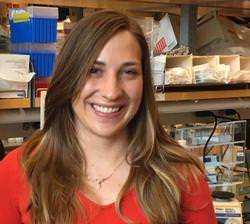 Kelsie Eichel, now a Damon Runyon postdoctoral fellow in the laboratory of Kang Shen at Stanford University, has been selected to receive the 2018 Merton Bernfield Award. She will be honored with a plaque, $1,000, and a chance to speak at the Organelle Homeostasis Minisymposium during the 2018 ASCB|EMBO Meeting in San Diego. Her talk is on Tuesday, December 11,at 5:20 pm.

Eichel was selected for her graduate research in the lab of Mark von Zastrow through the multidisciplinary Tetrad Program at the University of California, San Francisco, on the cell biology of β-arrestins, critical mediators of G protein–coupled receptor (GPCR) function. In his recommendation letter, von Zastrow describes Eichel as having “native observational skills, creativity, critical thinking, and fierce determination combined with a terrific work ethic.”

All cellular functions of β-arrestins were thought to require arrestin to be engaged in a stable physical complex with its cognate GPCR. Von Zastrow explained that during her work with him, “Kelsie delineated a distinct and additional cellular mechanism in which β-arrestin is activated by transient interaction with a GPCR but then dissociates and mediates downstream effects without the receptor.”

Her current work is focused on how neurons use polarized membrane trafficking mechanisms to selectively transport proteins to axons or dendrites. Understanding how neurons produce elaborate membrane protein compartmentalization is critical to understanding basic neurobiology as well as diseases of the nervous system.