Join or Renew
Community Member Profile Log in
May 4, 2015|In Memoriam, Member News

In Memoriam: Alan Hall, Pioneer in Rho GTPases and Chair of Cell Biology at Sloan-Kettering 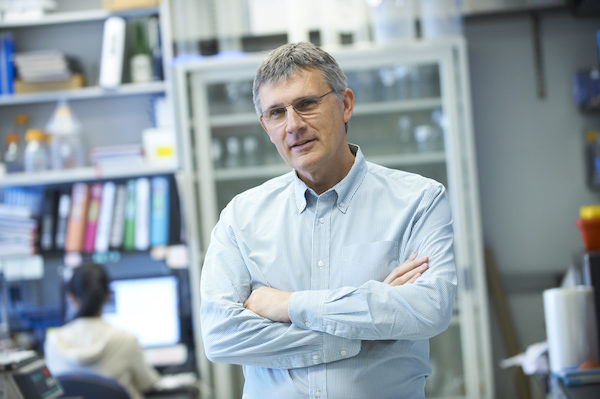 Alan Hall, a wary biochemist who became an enthusiastic cell biologist, and whose discovery that Rho, a Ras-related GTP-binding protein, was a molecular switch critical to actin filament activation shook up the field of cell motility, died Sunday in New York City. Hall, who joined the ASCB in 1995, became Chair of the Cell Biology Program at the Memorial Sloan Kettering Cancer Center in 2006. He was 62.

Hall’s lab explored the roles of three Rho GTPases, Rho, Rac, and Cdc42, in signal transduction pathways that controlled the assembly of the cytoskeleton and related integrin adhesion complexes. Rho GTPases have now been linked to everything from cancer cell motility to arterial inflammation.

A native of Yorkshire, Hall studied chemistry at Oxford University, a choice, he said “made easier considering that, during those days, my other potential choice, biology, seemed to involve little more than drawing pictures of dead frogs.” At Oxford, Hall added a few courses in biochemistry, if only to broaden his resume. He liked biochemistry well enough to enter graduate school at Oxford under Jeremy Knowles. Two months into the program, Knowles told Hall that he was moving to Harvard. Hal went with him, taking his PhD there in 1977, by which point Hall was calling himself a molecular biologist.

Molecular biology was not about drawing dead frogs and Hall did postdocs, one in Edinburgh and one in Switzerland, before deciding that he needed a job. He applied for two, one with a pharmaceutical company and one at what was then the Institute of Cancer Research (ICR). Having heard nothing from ICR, Hall was about to accept his industry job when he received a peevish letter from London, asking why he hadn’t responded to their letter offering him an appointment.

At ICR, he became a close colleague of Chris Marshall, who believed that cell biology was the way to unravel mechanisms driven by oncogenes. With postdoc Anne Ridley, Hall used cell microinjection and imaging techniques to make the first breakthrough on the Rho GTPases. In 1993, Hall joined a new cell biology program at University College London.

Reached at her Kings College London lab, Ridley said the shocking news of Hall’s death was still rocketing around the world through the network of “Alan Halls,” his former students and mentees. “He was such a fantastic mentor so we are a big family. We might be separated by ten years or more in the time we were in his lab but it doesn’t matter. The Alan Halls are all connected.” Ridley says the connection was forged through Hall’s caring and fairness in the lab. Hall wanted everyone to find their own problem, finish their experiment, and have something to take away afterward without any thought of creating competitors, Ridley recalled. “He was very supportive of everyone but he was fair. If you didn’t contribute significantly to an experiment, he would not list you as an author on the paper.” Years later, Hall was always asking for news of former students and fellows, Ridley remembers, “Even people who didn’t do particularly well in the lab.” Despite his move to New York, Hall’s influence on cell biology in the UK remained strong. “It’s such a small community. We all know each other and we all knew Alan,” she says.

Hall who was also the Editor-in-Chief of the Journal of Cell Biology, won the Canada Gairdner Prize in 2009 and the Louis Jeantet Prize for Medicine in 2006.