The American Society for Cell Biology (ASCB) is excited to honor Don Cleveland with the 2022 E. B. Wilson Medal. Cleveland will present the E.B. Wilson lecture, “Genome instability in cancer: chromothripsis and extrachromosomal DNA,” during Cell Bio 2022 in Washington, DC.

“What an amazing honor,” Cleveland exclaimed. “As an ASCB member since the late 1970s, a former ASCB President, and a big fan of E.B. Wilson’s work, it is humbling to receive the E.B. Wilson award, the highest honor in cell biology.”

Cleveland is a Professor of Medicine, Neurosciences, and Cellular and Molecular Medicine (CMM) at the Ludwig Institute for Cancer Research at the University of California, San Diego. He is also the chair of CMM. Cleveland is probably best known for purifying and characterizing the first microtubule-associated protein, tau, now recognized to misaccumulate in affected neurons in Alzheimer’s disease. In addition, he was the first to clone tubulin, keratin, and actin.

“I think he is a cell biologist’s cell biologist, using all tools in the armamentarium, including biophysics, cell biology, molecular biology, and mouse genetic models,” remarked Marc W. Kirschner, the John Franklin Enders Professor in the Department of Systems Biology at Harvard Medical School. “He has contributed significantly to our understanding of the etiology of disease in both ALS (amyotrophic lateral sclerosis) and Alzheimer’s.”

Cleveland has identified principles of genome instability in cancer, demonstrating that single chromosome missegregation can trigger repeated chromosome shattering (chromothripsis) that initiates and drives genome evolution in cancer. In 2019, he received India’s Genome Valley Excellence Award for this work. Cleveland summarized his current research: “We work on questions in two divergent directions: Mechanisms of genome instability in cancer; and the development of designer DNA drug therapy for neurodegenerative diseases, especially ALS.”

In addition to his foundational scientific contributions, Cleveland has led efforts to expand the scientific enterprise to a broader and more diverse workforce. According to Elaine Fuchs, the Rebecca C. Lancefield Professor at Rockefeller University, Cleveland “freely shares scientific materials generated in his lab” and has been acknowledged as an exemplary mentor and educator. “His science could stand on its own, but it doesn’t—Don is also a highly valued citizen of the cell biology community,” Fuchs said.

While he was ASCB President in 2013, Cleveland helped create the Declaration on Research Assessment (DORA), which “recognizes the need to improve the ways in which researchers and the outputs of scholarly research are evaluated.” He took part in the ASCB Stem Cell Task Force to seek new opportunities for using cultured human embryonic and human induced pluripotent stem cells. Cleveland led two different initiatives (one funded by NIH and the other supported by NSF) that aimed to advance the careers of scientists from underrepresented groups at minority-serving institutions. Cleveland was elected to the National Academy of Sciences in 2006 and to the inaugural cohort of ASCB Fellows in 2016. He received the 2018 Breakthrough Prize in Life Sciences for “uncovering the mechanisms underlying ALS and the development of ‘designer DNA drugs’ for silencing or activating disease-causing genes for the major nervous system diseases.”

Cleveland’s journey as a scientist began at New Mexico State University in 1972, where he earned a bachelor’s degree in physics. Shortly after entering Princeton University, Cleveland shifted his focus from physics to biochemistry, and earned his PhD with Marc Kirschner in 1977. He completed his postdoctoral training at the University of California, San Francisco and held a faculty position at Johns Hopkins School of Medicine Department of Cell Biology from 1981 to 1995. 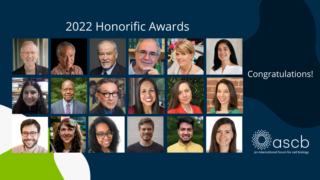