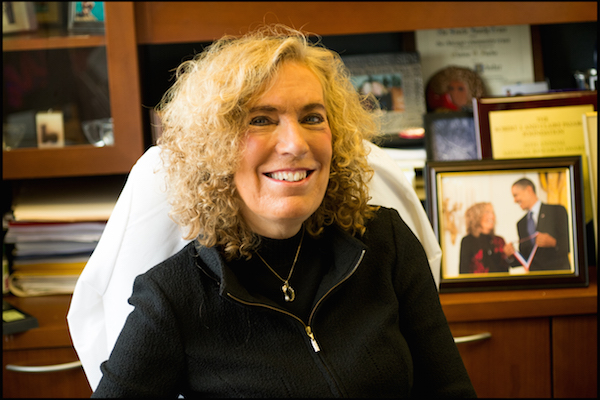 Hailed as a pioneer in exploring the basic principles of stem cell biology, Elaine Fuchs of Rockefeller University will receive the 2015 E.B. Wilson Medal, the ASCB’s highest scientific honor awarded, at the Annual Meeting in San Diego, CA, on December 15.

Writing to nominate Fuchs for the Wilson medal, Amy Wagers of Harvard University declared that, “Over the past 30 years, Dr. Fuchs has performed ground-breaking work that has led a revolution in our understanding of the biology of mammalian skin and revealed broad paradigms that regulate tissue regenerative stem cells across organ systems.”

A 1972 graduate of the University of Illinois, Fuchs earned her doctorate at Princeton in 1977 but her research career took off during her postdoctoral fellowship in the University of Chicago (UChicago) laboratory of Howard Green, who opened the modern field of skin cell biology by developing methods of culturing whole tissue. In the Green lab, Fuchs first tackled the keratins, a family of fibrous proteins that form into tough intermediate filaments holding together the outer surface of mammalian skin. Fuchs was the first to biochemically characterize keratin and then identify and clone the keratin genes and their promoters. She moved to her own lab at UChicago in 1980 and was first named a Howard Hughes Medical Institute (HHMI) investigator there in 1993. Moving back and forth from mouse models to human culture, the Fuchs lab was able to identify the keratin gene mutations responsible for five different human skin diseases including epidermolysis bullosa simplex.

From her foundational work in skin biology, Fuchs tackled the question of asymmetric cell division by which stem cells divide into two daughter cells with different cell fates, one daughter to continue down the path of differentiation into specialized skin cells while the other daughter returns to its pluripotent state. Outside of developmental biology, this was the first demonstration in adult stem cells that asymmetric mechanism was absolutely required for all stem cells to retain their pluripotent “stemness.”

Fuchs moved to Rockefeller Institute in 2002 where she is now the Rebecca C. Lancefield Professor of Mammalian Cell Biology and Development. Her lab there identified the key regulators of the differentiation pathway through which epithelial stem cells become hair follicles, skin epidermis, and sweat glands. The researchers broke down the signaling pathway into its distinct transcription factors and its epigenetic modifiers including microRNAs. Fuchs made the connection between frequently activated stem cells in the epidermis and skin cancer, becoming one of the first to characterize a cancer stem cell and tracing its role in the origins of squamous cell carcinoma, one of the world’s most common and deadliest human cancers. Her basic cell research has already had wide impact in clinical approaches to cancer, genetic skin disorders, and even possible treatments for hair loss.

A longtime ASCB member, Fuchs gave the prestigious Keith Porter Lecture at ASCB in 1996, served as ASCB President in 2001, and was the opening Keynoter at the San Francisco meeting in 2013. Her many honors and awards include election, at 45, to the National Academy of Sciences, the National Medal of Science awarded by President Obama in 2009, and the Albany Prize in Medicine and Biomedical Research in 2011.

“More than anyone else, Dr. Fuchs has brought a deep molecular understanding to the biology of skin and connected the understanding to explain many dermatological diseases,” wrote Marc Kirschner, founder and chair of the Systems Biology Department at Harvard Medical School. “She has made skin perhaps the best model for adult stem cell research beyond plants to general questions in cancer and in development. The direct clinical relevance of her research is considerable.”

When stem cell biology first emerged as a field in the early 2000s, the blood-making hematopoietic system was the main model, according to Margaret (Peggy) A. Goodell at the Baylor College of Medicine. It was Fuchs who turned stem cell investigators in a new direction. “Elaine’s work on skin regeneration for the prior decades set the stage for multiple advances,” wrote Goodell. “Her work over the past ~10 years… has transformed our understanding of skin stem cells and also influenced views and approaches in the broader stem cell field.”

The ASCB’s E.B. Wilson Medal honors America’s first modern cell biologist and the author of the 1896 book, The Cell, which remained the standard biology text for nearly 40 years. Wilson was one of the first to realize that the XX/XY chromosome match determined sex in humans.