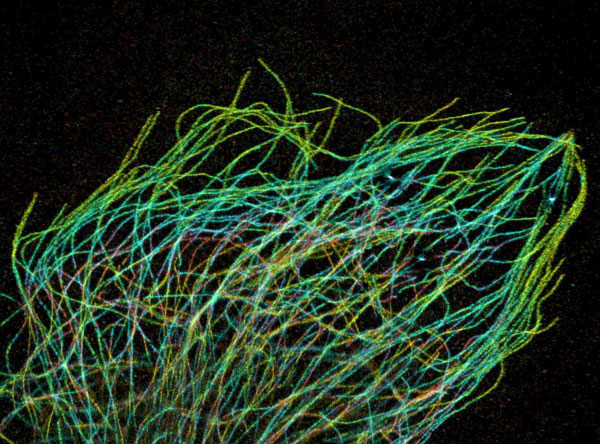 Superresolution image of tubulin, the subunit of microtubules. Image by Pakorn Kanchanawong and Clare Waterman. From the “Life:Mangified” exhibit at Dulles Airport.

Our big, bony skeletons are wonders of articulation but they can’t come close to our cytoskeletons for sheer dynamism, says Eva Nogales, professor at the University of California, Berkeley, and a Howard Hughes Medical Institute investigator. The cytoskeleton is always being rebuilt to help the cell maintain structure, move, and divide through the constant remodeling of microtubules, the building blocks of the cell’s skeleton. Nogales does structural studies of microtubules frozen at cryogenic temperatures (below -238°F or -150°C) with cryo-electron microscopy. Nogales presented her work at the Cell Structure Across Scales symposium on December 8 at the 2014 ASCB/IFCB meeting in Philadelphia.

“The lab makes atomic resolution models of microtubules in their functional state using cryo-electron microscopy,” Nogales said in an interview before her talk. Her lab wants to know how microtubules bound to different cellular molecules affect the stability or instability of the structure. Nogales believes that there are many different factors yet to be discovered that somehow promote what appear to be highly regulated changes in the cell’s skeleton. “We hope what we study will be of relevance to what happens in the cell, and that phenomena that happen in the cell can be explained in this structural framework,” she said.

“Microtubules are central to the process of chromosome segregation, a hallmark of cancer is mis-segregation of chromosomes and aneuploidy,” Nogales said. “There are a growing number of anticancer agents, the most commonly used is taxol, that act by binding to tubulin and inhibiting the normal dynamics, which are exactly what we are studying… Because microtubules and microtubule dynamics are essential for the life of the cell, especially for the process of cell division, there are obvious issues with using microtubules as a target [for chemotherapy]. The effect will not only be in the cancer cells, but in any other proliferating cells, and that’s why chemotherapy has deleterious effects on cancer patients. Our hope is that one day we will understand differences between tubulin isoforms that are more abundant in cancer cells to be able to do more specific targeting.”

Nogales earned her undergraduate degree in physics from Autonomous University of Madrid. It was her high school physics teacher who inspired her to pursue physics. “I was fascinated by the way she would explain to us how physical phenomena could be expressed with mathematical equations. That’s something we cannot do with most biological systems right now because of the complexity,” Nogales said.

Moving to the UK to pursue a physics doctorate, Nogales joined the laboratory of Joan Bordas, where she first began working with microtubules, drawing her away from pure physics. “A self-assembly system like microtubules is especially attractive to physicists because there are so many mechanics involved in how they work,” said Nogales. As a postdoc in Ken Downing’s lab at the Lawrence Berkeley National Laboratory, she was the first to discover the structure of tubulin, the subunit of microtubules.

Nogales received the ASCB Early Career Award and the Chabot Science Award for Excellence in 2005. More recently, one of her former PhD students, Greg Alushin, was named by Forbes’ Magazine in 2014 to its “30 Under 30 in Science and Healthcare” list.

Waiting to give her talk in Philadelphia, Nogales looked up and smiled at the memory or non-memory of those days. “It was a lot harder when they were little,” she recalled. “They are less than two years apart. To be honest it’s all a blur now.”