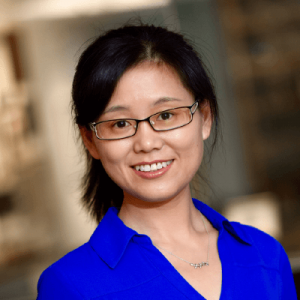 Meng Wang of Baylor College of Medicine has been named winner of the 2017 ASCB Early Career Life Scientist Award. The award, given each year since 1999 to an outstanding scientist who has been an independent investigator for seven or fewer years, will be presented to Wang at the ASCB|EMBO Meeting in December.

Wang is an associate professor in the Department of Molecular and Human Genetics and Huffington Center on Aging at Baylor College of Medicine and the Robert C. Fyfe Endowed Chair on Aging. She is being recognized for her contributions to the understanding of the fundamental mechanisms of aging. Her work has also uncovered promising potential drug targets to improve healthy aging.

“Metabolic activities are at the nexus of cellular homeostasis and generate thousands of intermediates and by-products as metabolites,” explained Wang. “In addition to their well-known functions as structural building blocks and energy sources, these natural metabolites can represent the chemical communication/coordination cues for cells and organisms. My laboratory investigates metabolite-directed communication systems in orchestrating cellular homeostasis and organismal health span, by harnessing the power of functional genomics in Caenorhabditis elegans with metabolomics, chemical engineering, and optical biophysics.”

Currently, Wang said her work is focused on two such metabolite-directed communication systems that regulate metabolic health and longevity: lysosome-to-nucleus retrograde lipid signals and microbe-to-host metabolite messages. “We are also developing new imaging platforms for in vivo metabolite fingerprinting to reveal their spatiotemporal dynamics and regulatory mechanisms,” she added.

Wang’s work has implications for the treatment of various age-related disorders such as obesity, cancer, cardiovascular disease, and type II diabetes.

Wang earned her BS in biochemistry and molecular biology from Peking University in 2001. In 2005, she completed a PhD in genetics at the University of Rochester in the laboratory of geneticist Dirk Bohmann. Her postdoctoral training was completed at Massachusetts General Hospital/Harvard Medical School with Gary Ruvkun in 2010.