Pushing the boundaries of cell biology: Highlights of the 2017 ASCB|EMBO meeting 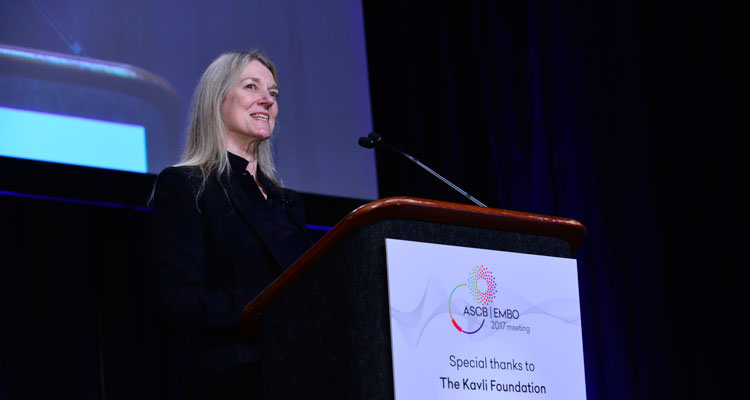 ASCB’s partnership with EMBO increased the geographic diversity of presenters as well as broadened the scope of topics covered at this meeting. Talks on core cell biology topics, such as the cell structure, organelles, the cytoskeleton, quality control, metabolism, and DNA/RNA biology remained the mainstay of the annual event and were enthusiastically received. But attendees also engaged in lively discussions on novel and advanced methods of imaging, neurodegenerative diseases, gene editing tools, stem cells, and much more.

The meeting officially kicked off Saturday evening with a welcome address by ASCB and EMBO leadership and a rousing keynote lecture by Cornelia “Cori” Bargmann. Bargmann is the president of science at the Chan Zuckerberg Initiative (CZI), a scientific research hub launched by Facebook founder Mark Zuckerberg and his wife, pediatrician Priscilla Chan. Part of Bargmann’s talk focused on her own research with the nematode Caenorhabditis elegans, which has proven to be a good animal model for studying neurons. But the portion of her talk on the future of cell biology and science, in general, seemed like a call to action for the more than 5,000 attendees who had filled the seats, aisle, and floor of the Terrace Ballroom at the Pennsylvania Convention Center where she spoke.

“Cell biology is going to make the most meaningful contributions to science in the next few years,” she told them. She also predicted that collaborative research efforts like the CZI would “advance human potential and promote equal opportunities with the goal of curing, managing, and preventing all diseases by the end of the century.” 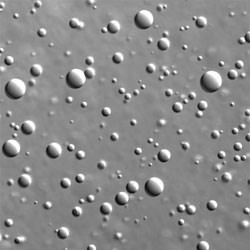 The Special Interest Subgroup sessions, which are member-organized, tend to cover hot or trending topics in cell biology and are typically among the most popular events at the Annual Meeting. The subgroups were held either Saturday or Wednesday and covered topics such as 4D nucleosome organization, quantitative cell biology, glycoproteins and glycolipids, cellular motors and switches, organoids, signaling, the cytoskeleton, and emerging approaches to disease treatment.

On Saturday, speakers during the session on advanced imaging techniques for qualitative cell biology spoke of how cell structures and processes could be more precisely measured with methods such as super-resolution and correlative electron microscopy. For example, Bin Wu of Johns Hopkins University described an innovative method for measuring gene expression with single-cell RNA imaging. Diane Lidke of the University of New Mexico explained how her lab has been able to visualize the early events of cell signal transduction, allowing her to identify disease biomarkers.

Organoids were discussed Saturday as well, at a session led by Jason C. Mills of Washington University in St. Louis and Xuebiao Yao of the University of Science and Technology of China. The talks centered around how induced pluripotent human stem cells had been coaxed to behave as certain tissues, including colorectal, gastric, and esophageal cancers. Speakers demonstrated a seemingly unlimited potential for complex cellular models to be engineered. Organelle communication, cytoskeletal dynamics, and other subcellular interactions of organoids will require further study, they said.

Subgroup sessions on Wednesday focused on neurite formation and outgrowth and on the architecture and dynamics of the neuronal cytoskeleton. 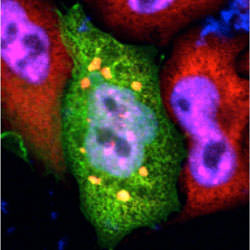 The Minisymposia and Microsymposia offer ASCB members who submit outstanding research abstracts by the first submission deadline a chance to give short oral presentations. Talks fell under classical cell biology themes, such as the nucleus, metabolism, cell signaling, and RNA biology, but the talks were as diverse as the speakers. While it would be impossible to capture all of them, here are summaries of a few of those outstanding presentations:

Lawrence Kazak from the Dana-Farber Cancer Institute described how mice that had had the gene for creatine biosynthesis removed were used to study the effects on diet-induced thermogenesis. This work could lead to ways to prevent diet-induced obesity.

Orly Reiner from the Weizmann Institute of Science in Israel talked about the development of a human brain organoid on a chip to model normal development and disease. As the brain tissue grew, the organoid developed folds and wrinkles in response to two opposing forces, much like regular brain tissue grows. Differential growth in the periphery of the organoid was exhibited as opposed to contraction in the center of the organoid. The principles of soft material physics were used to describe the physical mechanisms involved.

Ralitza Staneva from the Institut Curie in Paris described the use of 2-photon microscopy 3D imaging to observe tumor core cell explants and found that these cells were mobile and dynamic, even exhibiting collective behavior during tumor cell migration.

Interesting work presented by Jessica Henty-Ridilla from the State University of New York Upstate Medical University revealed that the actin-binding protein profilin also binds microtubules and controls microtubule growth rate. Mutations in profilin that are found in patients with neurodegenerative diseases such as amyotrophic lateral sclerosis impair the ability of profilin to regulate microtubule dynamics, which may lead to the motor neuron degeneration characteristics of this disease.

Studies on cancer cell signaling, adaptive responses, and metastasis engaged attendees. Ved Sharma from the Albert Einstein College of Medicine discussed the creation of a double-reporter MDA-MB-231 cell line that was used to visualize, for the first time, the connection between hypoxia and cancer stem cells in real-time in vivo.

Alexander Beatty from the Fox Chase Cancer Center discussed a project that had identified a metabolic vulnerability for promoting tumor cell death. This lab studied a subset of triple-negative breast cancer (TNBC) cells addicted to glutathione. By introducing a novel class of cancer-specific, small molecule ferroptotic inducers (conjugated polyunsaturated fatty acids) into the cell diet, cell growth and metastasis were impeded in tumor xenografts in vivo.

During the Minisymposium on visualization of compartmentalization in cancer, Ben Martin from Stony Brook University explained how a zebrafish xenograft and advanced imaging techniques were used to visualize human breast cancer cells at the single-cell and subcellular level.

Attendees were able to glean tips and tricks from experts on the hottest scientific methods and protocols through the variety of workshops offered. For example, the workshop on modern mass spectrometry covered how it can be used for proteomics in cell biology and for exploring metabolism at the organism level. In addition, mass spectrometry methods can also be employed for the analysis of drugs, tissue metabolites, and proteins.

Since its debut, cell biologists have been coming up with increasingly more interesting ways to use CRISPR. One workshop focused on how it could be used for genome tracking. Attendees learned about state-of-the-art advances in CRISPR-based gene editing technologies and how CRISPR can be used track dynamic movements of genomic loci in live cells. Another workshop discussed how cell biologists are also using protein-based molecular sensors and probes that allow visualization of dynamic molecular changes. In addition, genetically encoded optogenetic tools can use light to manipulate and control molecular events with fine spatiotemporal resolution.

COMPASS, ASCB’s Committee for Postdocs and Students, invited attendees to join them on what constituted a scientific bar crawl. Sporting their “Ask Me, I’m a Scientist” t-shirts printed especially for the event, more than 100 ASCB members and friends hit the streets of Philly on Saturday night to engage the local citizenry in some friendly scientific banter. While the success of this new venture remains to be seen, the visual evidence (see photos p. x) suggests a fun and exciting night out for everyone involved.