In the March 2021 ASCB Newsletter, then CEO Erika Shugart and I reported on changes to the Minisymposia co-chair and speaker selection process. We explained how they resulted in increased participation by scientists from racial and ethnic groups that have been shown to be underrepresented in the health-related sciences, as defined by the U.S. National Institutes of Health. The 2020 meeting statistics created a baseline for tracking demographics in future years. Below are statistics for the second year, 2021.

During the 2021 open call for co-chairs, ASCB received 102 applicants to fill 56 positions. Possibly because this meeting was advertised as a virtual meeting from the beginning we received 30 fewer applications than we received during the 2020 open call. In 2019 the Program Committee selected two URM co-chairs; prior to that, no more than five URM co-chairs were selected in any given year. In 2020, through the new application process, nine URM scientists were selected as co-chairs. In 2021, ASCB received four URM applications. We asked the Program Committee to invite additional URM candidates. Ultimately, eight URMs were selected to serve as co-chairs in 2021.

Minisymposia speaker selection is a two-step process. First, Minisymposia co-chairs score all submitted abstracts. Second, after the scoring, the co-chairs are asked to form cohesive sessions of six talks each from the top-scoring abstracts in their respective scientific tracks.

For the first time in 2021, we concealed the names and institutes of the submitted abstracts to reduce bias during the scoring process. Only submitters of top-scoring abstracts could be considered as speakers, including abstracts submitted by co-chairs and members of their labs.

In 2021, we received 841 abstracts for talks. After Special Interest Subgroup organizers selected abstracts, 726 abstracts remained to review for Minisymposia sessions. When applying, abstract submitters were asked to identify their gender identity; race and ethnicity; whether they were located at a primarily undergraduate institution (PUI), minority-serving institution (MSI), or tribal college; and if they identified as an URM as defined by NIH. They were also given the options “prefer not to answer”, and/or “does not apply” for each question. Those who identified as a URM had a higher acceptance rate versus submission rate than other U.S.-based applicants, as can be seen in the table below. We also had four speakers selected from a PUI, MSI, or tribal college, which is the same number as in 2020.

Geographic and Racial/Ethnicity Minisymposia Submission and Selection Data for 2021

The ASCB continues to be dedicated to producing a meeting program that represents diversity.

For 2022, we will be implementing these additional changes:

Cell Bio 2022 will be here before you know it, so please make sure to get your Minisymposium Co-Chair applications and abstracts in before the posted deadlines. The Co-Chair Application form opens for early, mid-, and late-career scientists in early March and will close on April 27. The abstract submission site opens in early June and the deadline to submit an abstract for consideration for a talk is August 2. 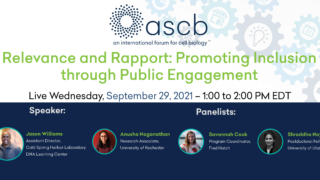