A fast-moving revolution: from Stonewall toward a more diverse scientific workforce

June 2019 is a special year for the LGBTQ+ community. The Stonewall riots started the fight for gay rights in the United States. It can be seen as a collective “coming out” of people fighting to be recognized as they are. It was violent, and not a “fun event” as our Pride Parade is nowadays. However, the riots had a strong impact on society. One year later, Gay Pride marches started all over the nation, and each year gay rights has moved more and more towards equality. Every June, we should pay respect to and celebrate with pride these strong men and women who fought for our rights and who were the start of a fast-moving revolution.

Just like the people present at the Stonewall riots 50 years ago, each LGBTQ person has their own coming out moment. It is an intense, personal moment, which is hard to explain. Personally, it took me a long time to accept myself as a gay man. I had known since my teenage years, but I never knew how to deal with it. Meanwhile, I had always been passionate about biology, and a college preparatory biology teacher (a cell biology teacher) was an inspiration for me to become a biologist. He was my first role model in biology. After moving to Rio de Janeiro to study biology at the biggest federal university in the country, I was exposed to high-level science, including cell biology, and a much more diverse cohort of people. From there, it still took me five to six more years to come out to myself, then to my uncle (who is also gay), and my friends, brothers, and parents. I did not have a negative experience from it, but I do recall the relief and feeling of freedom that coming out gave me. At that time, I was really trying not to associate my personal life with my scientific career.

This way of thinking changed in 2011/2012 when I started meeting more and more LGBTQ people, and I realized my journey to coming out was not the common one. Lots of people don’t have easy coming out experiences, and I was lucky to have a less complicated one. I went to the ASCB meeting and there was a small LGBT networking session of maybe 10-15 people. I noticed how people were still struggling with coming out, accepting themselves, and how much could be done in terms of increasing visibility of LGBTQ diversity in science. In September 2013, I wrote my first piece for ASCB about LGBTQ issues in science, which was the first time I came out of the closet to my coworkers. From that point on, I was engaged in creating more visibility for LGBTQ cell biologists. Since then, I make no separation between my personal self and my professional self.

Throughout 2014, I started working with ASCB staff and fellow ASCB members to create a dedicated and continuous forum for LGBTQ minorities within ASCB. Three elements were critical for success: science, inspiration, and networking. We needed a place to have an openly LGBTQ successful scientist to share his/her science, to inspire audiences as a role model, and to talk to us about how to be openly LGBTQ and attain success. This session would enable people to come to an LGBTQ session to both hear about excellent science and get inspired by openly LGBTQ cell biologists. With this in mind, the first LGBTQ Diversity Session was created and had an attendance of 100 people on a cold Philadelphia Monday morning. 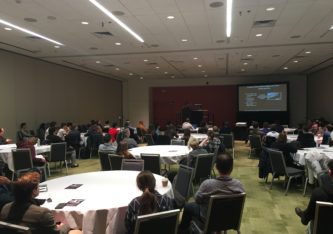 Subsequently, the ASCB Council created the Task Force (TF) and included “lesbian, gay, bisexual, transgender and queer (LGBTQ+) scientists as integral to the society’s mandate to advance diversity in the scientific workforce.”  The newly created TF was ready to start working, so it was time to recruit members.

So many accomplishments after only 5 years

After Philadelphia, the TF expanded to include members from different career stages and areas of diversity in the LGBTQ universe. There are more people, more ideas, and more activities. Lee Ligon and I were nominated as co-chairs, and with the help of the fellow TF members and ASCB staff, we kept the successful LGBTQ Diversity Session in place. (We will celebrate our sixth session at the 2019 ASCB|EMBO Meeting in Washington, DC.) We have enjoyed great attendance levels and talks given by the best cell biologists in the nation. We were also able to get funds for travel grants available exclusively for LGBTQ students and postdocs. We have received incredible applications over the last two years, and the letters of interest demonstrate how important it is to have a platform for diversity and inclusion for LGBTQ people. More visibility leads to more inclusivity.

Lastly, during the 2018 ASCB|EMBO Meeting in San Diego, we had a gender-neutral bathroom at the convention center. Some people don’t understand why, but it is a very serious need and an educational lesson for everyone. Your gender should not be dictated by a door sign, and by the end of last year’s conference, I could clearly see the impact of the bathroom in people’s minds and by the amazing feedback received. In San Diego, we also made a leadership transition. The co-chair baton went to Ashley Lakoduk, and now I can enjoy and help the TF as a member. Leadership transitions are critical for the success of any committee/organization, and it is no different here. Fresh minds can always improve an established model.

The vision of a diverse and inclusive ASCB

I am very proud to say that my professional scientific society—my scientific home— is a society that cares about diversity and inclusion. ASCB more than cares, it acts in favor of a diverse and inclusive community. The TF could not have accomplished anything without the support of ASCB leadership and staff. ASCB has been concerned about inclusivity since its beginning and continues to be.  Looking forward, diversity and inclusion should be a year-long fight. ASCB (including you, fellow member) and the TF should be engaged in activities not only during the annual meeting but every day. We are always brainstorming, and we are open to your suggestions!

Let’s celebrate the victories achieved after Stonewall and remember that coming out and being out is an everyday activity. Happy pride to you all!