The opening paragraph of the editorial stated what those of us working on academic reform face all too often — denial of the problem in the face of evidence to the contrary:

“‘Things are not what they used to be.’ How often those in the older generation use this phrase to scold the morals, attitudes and behaviour of younger rivals. And yet, how often do the same people, often in positions of power and responsibility, deny the changes in circumstance that newer generations complain about with justification.”

The Editorial therefore goes on to state explicitly:

“So, let’s be clear: young scientists today face a harsher, more competitive, stricter, more dispiriting workplace than their bosses and senior colleagues did at the same stages of their own careers. Things are simply not the same as they were back in the day. They are more difficult.”

However when the article came out, the very first comment read:

Other comments were in a similar vein.

As you may appreciate, despite a special issue dedicated to issues facing young scientists, there are still those who do not accept the problem. There is also an issue about the quality/quantity of data because there is poor tracking of career outcomes for graduate students and postdocs (Polka et al., 2015),2 and poor administration of postdocs (meaning that we don’t even know the actual number of postdocs in the U.S.) (Schaller and McDowell, 2016)3. Thus, there is a “chicken and egg” problem of needing to collect data to make informed reforms to academia, but needing to make reforms in order to collect the data.

To combat this, we at Future of Research recently teamed up with labor economists at the U.S. Census Bureau/NIH to look at the U.S. biomedical workforce using census data, with the aim of using this to try to influence policy, and also to inform junior and senior scientists alike (particularly in academia) about the realities we currently face. We have produced a comprehensive analysis of the historical size, shape, and demography of the biomedical workforce in our preprint, “Preparing for the 21st Century Biomedical Research Job Market: Using Census Data to Inform Policy and Career Decision-Making” (Heggeness et al., 2016a)4 which is discussed in our comment in Nature earlier this month, “The New Face of Science in the U.S.” (Heggeness et al., 2017).5 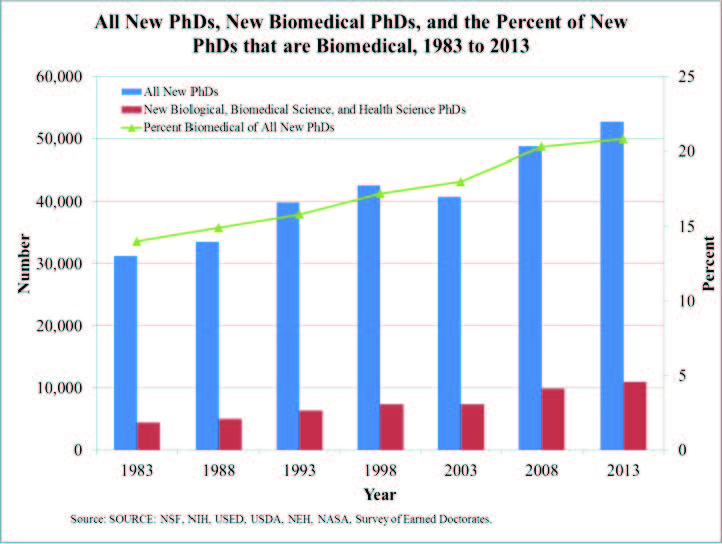 Panel from a figure in our preprint showing the number of new PhDs, new biomedical PhDs, and the percentage of new PhDs that are biomedical, 1983 to 2013.

The Integrated Public-Use Microdata Series-USA (IPUMS-USA, University of Minnesota) contains data from the decennial census, and the annual American Community Survey (ACS), which we used to look at biomedical scientists (for more details on the methods, see Appendix 2. Data and Methods (Heggeness et al., 2016); also, IPUMS has a new project, IPUMS Higher Ed, combining data from various surveys carried out by the National Science Foundation.

Figure 3 shows that although the workforce is increasingly diverse, there’s still a way to go. Work elsewhere has shown that diversity is highest at early academic career stages, and women and minorities are under-represented in leadership and independent-research positions (Heggeness et al., 2016).7 Despite a large pool of junior scientists from which to draw, as things currently stand it may take a very long time for faculty diversity to increase significantly (Gibbs Jr. et al., 2016).8 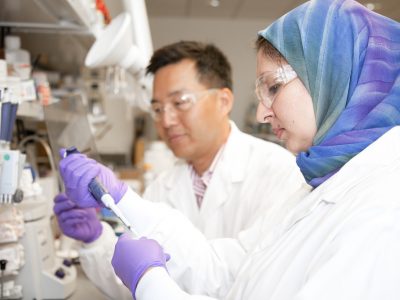 Some of my favorite data in our work has been remarked upon in my poster presentations at recent conferences as being supported anecdotally — that women are less likely than men to have a non-working spouse able to shoulder responsibilities at home, that they are less likely to be married than men; but when they are married, they are more likely to have a spouse with a professional degree, who is also in the biomedical workforce (Figure 3D, E, F). In particular, look at married women in the workforce aged 70+ in Figure 3F – ALL their spouses have either a PhD or MD. As pointed out in Panel C in our Nature comment, men aged 30-39 are 7x more likely to have an unemployed spouse. When you compare this with the ages of youngest children of married researchers (Panel C Nature; Figure 3G in preprint), the age when many researchers have young children intersects with early career stages and transitioning to independence. The difference between genders in spouse employment status may lead to a difference in support structures, which in turn could affect transition to independence.

In the preprint, we also discuss in depth the problems with data on postdocs — in Appendix 1, Table 1 lays out the various estimates for the population of all postdocs, and we make the case for more to be done to make sure postdocs are counted, and tracked. Given that this is a “trainee” population being directed toward academic positions, their numbers must be assessed and analyzed to ensure a sustainable, and diverse, faculty.

While data are in somewhat short supply, there are still plenty of data highlighting the problems we face. Most junior biomedical scientists do not go into academe. Movement of junior scientists into non-academic positions, and increasingly into positions abroad, needs to be addressed in their training. I hardly need point to current geopolitical events to justify why it would be in everyone’s interests to aspire to an effective international scientific enterprise, and not just an increasingly-unsustainable academic system.

We have specifically published our work as a preprint in the Self-Journal of Science to a) make it available more quickly for discussion, as laid out in the aims of the ASAPbio preprint movement; b) provide a format in which readers can comment directly, allowing us to make revisions and clarifications; c) make it freely and transparently available for all uses, by policy-makers, academics who mentor trainees, and junior scientists alike; and d) use it as a basis for highlighting the plentiful research produced by the science policy community, by curating a self-journal on the case for reforming the scientific enterprise.

Have any comments on how this data may/may not be useful, or what other data/collaborations with economists and policy researchers you’d like to see? Please feel free to leave them below!