by Charles A Easley

For background and information on the GSI and NGRI, click here

As an Early Stage Investigator (ESI) in academia here in the US, it’s becoming harder and harder to tell my trainees that the outlook is positive for them for a career in academia. But a glimmer of hope shone with the NIH’s Grant Support Index to limit funding to labs and enable a “spreading of the wealth effect” that would certainly improve funding rates for ESI’s like myself and mid-career scientists. Yes, the GSI had its share of concerns. For instance, I thought the program should not “tax” senior investigators on training grants as it did in its original form, but that was an easy fix. Instead the NIH scrapped the plan quickly after presumably receiving some intense feedback from highly-funded investigators and their institutions. But my opinion in support for the GSI is useless without facts, so allow me to share some of the data from the NIH. Currently at the NIH, the top 1% (made up mostly of senior scientists) hold 11% of the extramural budget, the top 10% receive 40% of the budget, and the top 20% hold 56% of the budget and this 20% is made up mostly by senior level scientists. The plight gets worse for ESIs. Here’s a graph from the NIH website that indicates a disproportionate amount of money going to ESIs (https://nexus.od.nih.gov/all/2017/03/06/mid-career-investigators-shifting-demographics-nih-grant-recipients/): 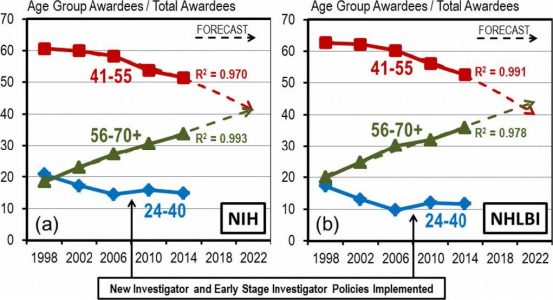 As this graph shows, each year more and more funding is going towards senior scientists while the total funding for mid-career and ESIs appears to be decreasing. Now some of these data points can be explained as merely the scientific community aging, but that further underscores the need to invigorate the next generation of scientists (i.e. the scientific community is top-heavy with senior-level scientists). A few years back, the NIH created the ESI stage to help young investigators get R01s, and for a short time, that system worked, but now these mid-career scientists are struggling to renew their grants or get a second grant (and the outlook doesn’t look inviting if we examine the graph below). And despite the early successes of the ESI program, there still is not enough money to encourage young scientists to stay in academia because of the disproportionate amount of funds available to young scientists. Science magazine just recently released a harrowing article that highlights the struggles of an ESI to obtain grant funding, and it is worth a read: http://www.sciencemag.org/careers/2017/07/another-tenure-track-scientist-bites-dust?utm_source=sciencemagazine&utm_medium=facebook-text&utm_campaign=ttee-14230 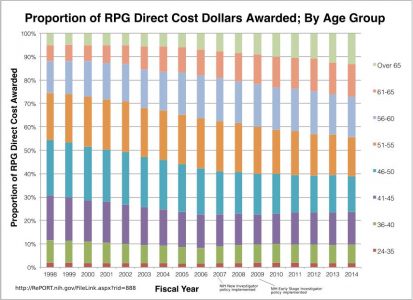 Another graph from NIH Extramural Nexus from 2015 (from: https://nexus.od.nih.gov/all/2015/03/25/age-of-investigator/) further highlights what appears to be an increased proportion of funding for senior scientists at the expense of early and mid-career scientists. These trends are even worse today, and the GSI initiative looked to “turn the tide” to invigorate the next generation of scientists which is something that is so badly needed during this difficult funding time. It is a shame that this initiative wasn’t fully discussed by the NIH research community and possibly amended, rather than being tabled so quickly. The discouraging trends indicated in the two graphs may undoubtedly result in more and more talented young individuals leaving academia. This inevitable brain drain will eventually severely and negatively impact the landscape of American Science, something no scientist wants to see happen.

I personally think that what is lost in this discussion is that we ESIs are dependent on the support from senior scientists. We really need top senior scientists (e.g., chairs of NIH study sections, those holding executive positions in societies such as ASCB, the leadership at our institutions, etc), on our side. Without their support behind initiatives such as the GSI, we ESIs will have a hard time being heard and may continue to struggle to gain federal funding for our research programs. I recognize that many senior scientists would be “taking a hit” if the GSI would go into effect, but making this commitment and supporting some type of GSI initiative would, in my opinion, do wonders for us ESIs and for strengthening the next generation of scientific leaders. Thus I urge scientists of all career stages to support initiatives that add substantial funding and support for ESIs and mid-career scientists, as this support is critical for continuing our scientific edge globally.

Assistant Professor in the Department of Environmental Health Science, University of Georgia College of Public Health