Yes We Can Cure: The Obama Years

With the election approaching, we are on the cusp of new leadership, new agendas, and new ideas, so now is a good time to assess how biomedical research has fared under the 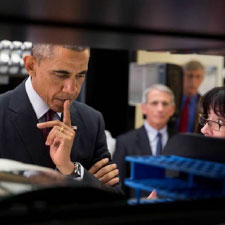 Obama administration. Here’s a look at some of President Obama’s actions that promoted and advanced biomedical research over the past eight years.

Obama was first sworn into office on January 20, 2009, and a month later he enacted the largest annual increase in research and development funding in our nation’s history with the American Recovery and Reinvestment Act of February 2009 (ARRA). The National Institutes of Health (NIH) received $8.2 billion in extramural funding from the ARRA to help stimulate the economy by accelerating discoveries in biomedical research. Many cell biologists benefited from this infusion of funds, including researchers studying regenerative medicine and airway epithelial cells, among many areas. ASCB even benefited from a $2.5 million NIH ARRA grant that helped bring to fruition The Cell: An Image Library, a comprehensive public collection of cell images designed to assist the scientific community.1

Right on the heels of the ARRA stimulus package, Obama invited scientists and research advocates to a White House ceremony where he signed his first executive order, which overturned President George W. Bush’s rule that limited research on embryonic stem cell lines. Obama’s executive order directed the NIH to develop guidelines and regulations to govern federally funded human embryonic stem cell research. The ASCB was on the forefront of efforts during Bush’s administration to overturn his executive order. It was an essential issue for many ASCB members who were stymied in their research by the limited number of available cell lines as well as by the necessity of working with existing cell lines that were compromised. Obama’s action freed the hands of many scientists—especially cell biologists—to conduct embryonic stem cell research in a responsible, ethical, and productive manner.

Obama has clearly expressed his administration’s commitment to scientific research. For example, in a speech on April 29, 2013, commemorating the 150th anniversary of the National Academy of Sciences, he told the assembled scientists, “…for 150 years, you’ve strived to answer big questions, solve tough problems, not for yourselves but for the benefit of the nation. And that legacy has endured from the Academy’s founding days. And when you look at our history, you’ve stepped up at times of enormous need and, in some cases, great peril.” He reiterated that point in the speech by saying “in all the sciences, we’ve got to make sure that we are supporting the idea that they’re not subject to politics, that they’re not skewed by an agenda, that, as I said before, we make sure that we go where the evidence leads us. And that’s why we’ve got to keep investing in these sciences.”

Obama put forth three ambitious biomedical initiatives in the course of his administration. In 2013, he introduced the BRAIN Initiative to uncover new ways to treat, prevent, and cure brain disorders such as Alzheimer’s disease, Parkinson’s disease, schizophrenia, autism, epilepsy, and traumatic brain injury. The initiative has garnered $1.5 billion in public and private funds and has more than 100 academic papers tied to it.

The president went on to launch the Precision Medicine Initiative in January 2015. The initiative provides more than $200 million toward advances in research, technology, and policies aimed at enabling a new era of medicine in which researchers, providers, and patients work together to develop individualized care.

On January 12, 2016, at his final State of the Union address, Obama continued his commitment to biomedical research with his introduction of a third ambitious undertaking, the Cancer Moonshot Initiative. He announced that he was putting Vice President Joe Biden, who lost his son Beau to cancer in 2015, at the helm of this ambitious effort to once and for all end cancer. This $1 billion initiative encourages public and private efforts to double the rate of progress in cancer prevention, diagnosis, treatment, and care in a quest to make a decade’s worth of advances in five years. This endeavor caps off the final year of a presidency that has consistently recognized the capabilities of our scientists, including basic researchers.

Obama has faced pressure and pushback from a polarized Congress but has maintained his administration’s commitment to science and innovation. We do not know what November’s election will bring to the scientific community, but it’s fair to say that the administration’s endeavors over the past eight years have helped advance biomedical research.

Footnote
1The Cell: An Image Library is now managed by the National Center for Microscopy and Imaging Research under perpetual license from ASCB and is part of The Cell Image Library.