Mind the Gap—The Scary Gulf Between Scientists and the Public 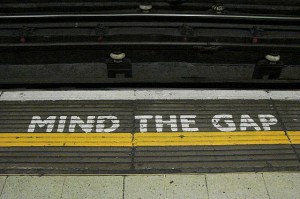 The Pew Research Center released a report titled Public and Scientists’ Views on Science and Society [1] in which the take home message is that there is a wide gap between how scientists and the general public see the world. This is worrisome. Scientists are a key component of society and their work informs and improves our society’s choices and increases our options. Failing to be heard outside the laboratory is a failure of science communication and a huge missed opportunity for society at large.

But let’s start from the Pew report. It compares the views of members of the American Association for the Advancement of Science (AAAS) with those of the general population. The report indicates broad support within the general public for science in general, and, more specifically, for government support of scientific activities. Over 70% of adults in the general population believe that investments in science and technology, as well as in basic science, will pay off in the long run. Almost 80% indicate that science had made life easier for most people. Note that the question did not use the word better. Interesting. This is all very good, and it becomes clear that, as scientists, we have a mandate from society. Like any mandate, ours comes with responsibilities yet scientists are eager to assume these responsibilities and contribute to society in the best way we can.

Really? Do we live in parallel worlds? Are we living in a sort of Matrix world? This is one of my favorite science fiction movies but not my idea of an ideal society. The gap between the worldviews of scientists and the general public on specific topics is often in double-digit percentages. Do take a look at the report yourself. There are a lot more interesting data in there and much of it should keep you up at night.

So, what should scientists do?

There is a big job awaiting us in improving communicating science to the general public. Clearly we are not doing a great job. First of all, we need to better understand how to get our message across. Even when we speak in lay terms or produce communication materials for a general audience, we all too often think, consciously or not, of the general public as the readers of the New York Times, The Economist, or as listeners of National Public Radio. This is not the general public. This is the choir. And we know choir loves us but the voice of science needs to be heard beyond the choir. This takes skill, preparation, and professional understanding.

Last year, I participated in founding a new organization called ScienceCounts with the goal of promoting awareness and support of science. Beyond the choir, I would add. First, through polls and communications experiments, ScienceCounts wants to develop a rigorous understanding of public opinion and values concerning scientific research at a level of resolution and specificity not done previously. With this knowledge in hand, the idea is to test effective messaging that can move the needle in the general public about the awareness and understanding of day-to-day science. This is not about rallying general support. This is about changing the public mindset to accept science in the real world without undue fear or panic. The goal is to close that wide gap in the Pew study. ScienceCounts is in its infancy but it is exciting to be involved with a project that is thinking big on this important issue.

While we need professional communication efforts, like the one that ScienceCounts intends to pursue, we cannot underestimate the power of testimonials by individuals. As scientists we need to understand that speaking (and listening) to the public is not an optional or once a year obligation. It is central to our professional duties. Not everyone is comfortable or skilled at this, but many more scientists can be trained to speak about science outside the lab. You can communicate science effectively at a cocktail party with your neighbors, at a school event, or with your congressman.

ASCB has tried to be at the forefront of scientific communication training. At our Annual Meeting, we have media training for scientists from news media professionals including a team of former producers from Good Morning America. We have contests such as the elevator speech where contestants vie to put over the value of research in the space of a short elevator ride.

Then there is ASCB’s Celldance video challenge. This year, the Celldance organizers changed the program from a contest to a mini-movie studio. Celldance sought out and solicited video proposals from ASCB member labs and then served as their producers. Check out the fantastic Celldance video results on the ASCB website. Here you can see real science stories—live imaging (and not animation) of immune cells attacking cancer cells, a tiny fungus with a powerful scientific reach, and a close-up of cells responding to wounding. BTW, these videos were recently featured in the NIH Director’s Blog and they were a total blockbuster, ranked as the third most viewed NIH Director’s Blog ever.

Dr. Stefano Bertuzzi is the Executive Director of the American Society for Cell Biology. In this position he is responsible, with the ASCB Board, for strategic planning and all operations at the Society to serve the needs of its ~9,000 members and to promote the field of cellular biology and basic science. Email: sbertuzzi@ascb.org