The Editorial Board of Molecular Biology of the Cell has highlighted the following articles from the November and December 2016 issues. From among the many fine articles in the journal, the Board selects for these Highlights articles that are of broad interest and significantly advance knowledge or provide new concepts or approaches that extend our understanding. 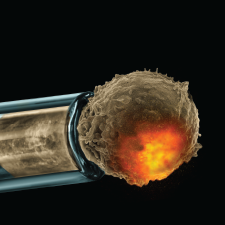 T lymphocytes in the human body routinely undergo large deformations, both passively when going through narrow capillaries and actively when transmigrating across endothelial cells or squeezing through tissue. In this artistic rendering, a T lymphocyte is aspirated in a micropipette to mimic passive deformations that occur when squeezing through narrow capillaries. The fluorescent signal is due to the entry of propidium iodide into the cell and indicates membrane rupture. Guillou et al. (Mol. Biol. Cell 27, 3574–3582) demonstrate that T lymphocytes rupture at a critical membrane area expansion when passively deformed. They further show that the unfolded membrane matches the excess membrane contained in microvilli and membrane folds. In contrast, during transendothelial migration, a form of active deformation, the authors find that the membrane surface exceeds by a factor of two the amount of membrane stored in microvilli and folds. (Image: by Julien Husson, Ecole polytechnique, Palaiseau, France; cellmechanics.jimdo.com/galleries)

The phospholipid flippase ATP9A is required for the recycling pathway from the endosomes to the plasma membrane
Yoshiki Tanaka, Natsuki Ono, Takahiro Shima, Gaku Tanaka, Yohei Katoh, Kazuhisa Nakayama, Hiroyuki Takatsu, and Hye-Won Shin
ATP9A is localized to phosphatidylserine-positive early and recycling endosomes, but not late endosomes, in HeLa cells. ATP9A plays a crucial role in recycling of transferrin and glucose transporter 1 from endosomes to the plasma membrane.
Mol. Biol. Cell 27 (24), 3883–3893

Lamin-B1 contributes to the proper timing of epicardial cell migration and function during embryonic heart development
Joseph R. Tran, Xiaobin Zheng, and Yixian Zheng
Lamin-B1 is important for the timing of cell morphological changes and migration of epicardial cells during embryogenesis. The results highlight the use of these cells for in vitro and in vivo study of these classic cell biological phenomena.
Mol. Biol. Cell 27 (25), 3956–3963

Identification of the endocytic sorting signal recognized by the Art1-Rsp5 ubiquitin ligase complex
Evan L. Guiney, Till Klecker, and Scott D. Emr
Endocytosis of plasma membrane proteins in Saccharomyces cerevisiae requires their ubiquitination by the ART-Rsp5 ubiquitin ligase complex. Little is known about how the complex engages substrates. The Art1 C-terminus recognizes Mup1 via a tripartite ART sorting signal: an acidic patch, in proximity to the membrane and substrate lysines.
Mol. Biol. Cell 27 (25), 4043–4054