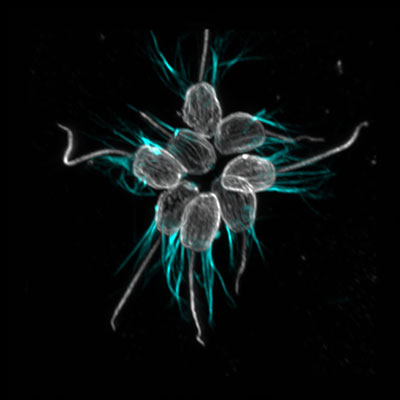 Research that a chemical signal from a bacterium sends this eukaryote, S. rosetta, into a mating frenzy, a finding that raises the possibility that environment bacteria or bacterial symbionts regulate mating in animals. Image courtesy of Arielle Woznica, University of California, Berkeley

Researchers seeking the evolutionary roots of the animal kingdom have discovered a bacterium, Vibrio fischeri, that acts as an aphrodisiac on a species of protozoan choanoflagellates, the closest living relatives of animals, by releasing an enzyme that sends Salpinogoeca rosetta, into a full mating frenzy. Choanoflagellates are eukaryotes. Their cells have a membrane-bound nucleus containing their genetic material, and they live free as single cells and in multicellular colonies. The scientists, Nicole King and Arielle Woznica of the University of California, Berkeley, with collaborators Jon Clardy and J.P. Gerdt at Harvard Medical School in Boston, discovered that within minutes after Vibrio releases a chonodroitin sulfate (CS) lyase near S. Rosetta, the choanoflagellates aggregate into mass mating swarms, entering into cell and nuclear fusion while duplicating and recombining their genetic material.

This is the first demonstration that bacteria can drive sexual mating in eukaroyotes, say the authors who will present their work at the Annual Meeting of the American Society for Cell Biology (ASCB) in San Francisco on December 6. They add that this discovery “raises the possibility that environment bacteria or bacterial symbiots regulate mating in animals as well.”

The King lab at Berkeley has pioneered the exploration of the origins of multicellularity by looking at choanoflagellates for shared characteristics and behaviors conserved by evolution in animals. In recent years, the study of human biology has been shaken up by discoveries of how the bacteria that live in the gut, the so-called microbiome, affect metabolism, the immune system, and disease progression. The tangled symbiotic and pathogenic relationships between bacteria and multicellular animals go back into deep evolutionary time where fossils of ancestral microscopic soft-bodied eukaryotes are unlikely to have survived. But in living choanoflagellates, King believes researchers have a model organism to compare and dissect the roots of multicellularity that bind animals and their protozoan relatives.