Cryo-EM to see your molecules and your cells 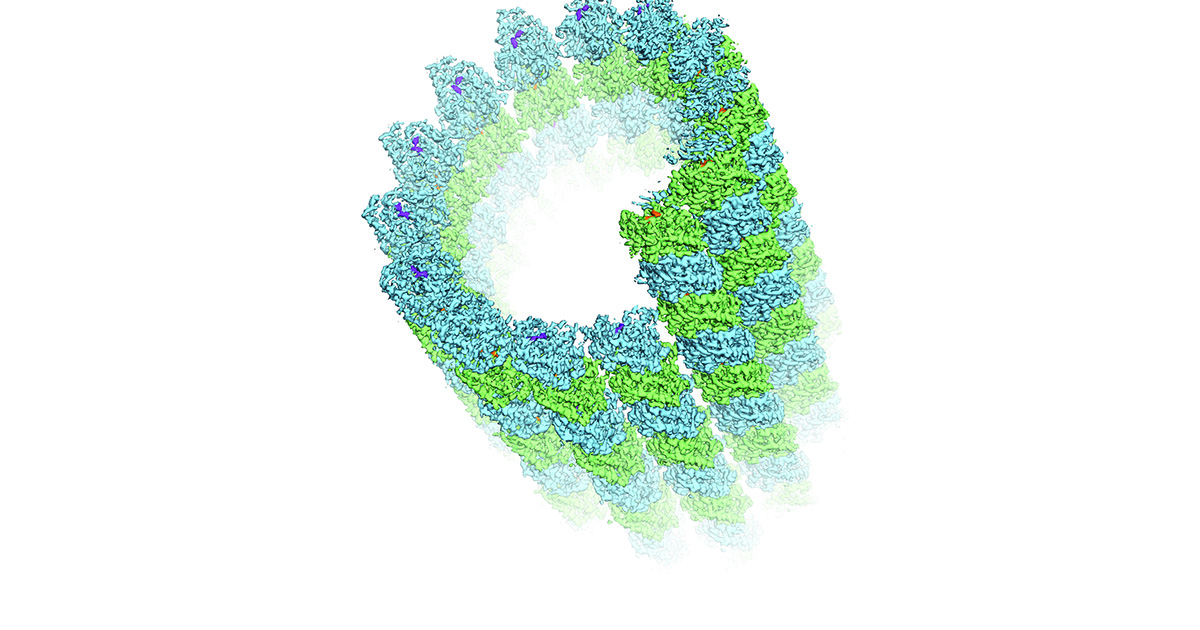 I am a visual thinker/learner, and when I think about molecular mechanisms in biology, structure is always at the heart of it. In fact, I have made my scientific career out of visualizing biological macromolecules, and this article discusses cryo-electron microscopy (cryo-EM), which has been my method of choice for this task since way before it became mainstream.

Past, Present, and Future

In 2017 the Nobel Prize in Chemistry went to three pioneers in the development of cryo-EM as a structural biology technique: Jacques Dubochet, Joachim Frank, and Richard Henderson. The work being recognized happened mostly during the 1980s and early 1990s, but its impact became truly apparent about five years ago, with the advent of what has been called the “resolution revolution.”

As early as the mid-1970s, Robert Glaeser at the University of California, Berkeley, with his then-student Kenneth Taylor, showed that maintaining the sample at liquid nitrogen temperature reduced radiation damage by the electrons used in transmission electron microscopy (TEM) enough to be able to retrieve high-resolution information from frozen-hydrated samples before they were damaged. It took about a decade to develop a method for vitrification of samples (rapid freezing that does not give water molecules time to form a crystal, so they remain a “glass” in the solid state) that could be easily implemented in any lab. This was the work of Dubochet while at the European Molecular Biology Laboratory. Negative stained samples had been visualized by TEM for years, and 3D reconstruction methodology, mostly of helical assemblies (like the T4 bacteriophage tail) and 2D crystals (like those naturally formed on a membrane by bacteriorhodopsin), had been developed, especially at the Laboratory of Molecular Biology (LMB) at Cambridge by Aaron Klug, Henderson, and colleagues. Those types of samples organize into ordered arrays that allow averaging by Fourier filtration (here math helps you big time!), and were thought of as ideal for analysis.

But macromolecules that do not self-organize that way, “single particles,” appeared nearly unreachable. It was Frank who, using classification and alignment of individual images of ribosomes, demonstrated the feasibility of studying such molecules. His single particle implementation of 3D-EM reconstruction of molecules that are visualized in a frozen hydrated state is what most people now refer to as cryo-EM.

The first atomic structure ever obtained by TEM was that of 2D crystals of bacteriorhodopsin by Henderson in 1990. It took more than two decades to be able to achieve that kind of resolution without crystals, helical arrays, or icosahedral particles. What has allowed single particle cryo-EM methodology to mature into a fully fleshed structural biology technique that has become generally applicable to produce atomic models? It was the development of direct electron detectors, which improved both contrast and resolution in the images, as well as maximum likelihood methods, like those implemented by Sjors Scheres at the LMB, that took full advantage of those images during their computational analysis. Those technical developments, together with easy to use pipelines that automate data collection, as pioneered by Bridget Carragher and Clint Potter while at the Scripps Institute, are contributing to make cryo-EM a high-throughput structural technique. Today, it is hard to find an issue of any major journal that does not include a report in which cryo-EM has been used to reveal the highly coveted structure of some integral membrane protein or a flexible macromolecular assembly that had proven refractory to crystallographic characterization.

As powerful as cryo-EM is today, some major challenges still remain, and big opportunities still lie ahead. Sample preparation remains a major bottleneck, and many samples are still extremely challenging because they misbehave when placed on an EM grid. Samples that are conformationally complex (say, they move in a continuous fashion) still require a compromise in resolution. These challenges can be addressed with technical developments that will make it possible to obtain structures of any purified biomolecule, using miniscule amounts of sample (say, from a biopsy) and describing in atomic detail its functional states. Imagine the possibilities.

If you are reading this, you are likely a cell biologist who would rather see these macromolecules in the glorious complexity of the cellular milieu. Dubochet, after his breakthrough on the vitrification of macromolecular solutions, dedicated considerable effort to the task of visualizing cells (I believe one of his interests was to see the structure of chromatin in the nucleus). The problem when looking at cells (let alone tissues) in TEM is that they are FAR too thick. So, the only way to look at them is to slice them, like a salami. This slicing process has been done for many years and it is fairly routine, but only after the cells have been dehydrated and embedded in a resin that makes the cutting process easy.

But visualization of macromolecular structure requires the use of cryo-electron tomography (cryo-ET) on frozen samples that will preserve the molecular details of the macromolecules without the deleterious effects of chemical fixation and staining. This is seriously complicated. Vitrifying whole eukaryotic cells may require the non-trivial process of high-pressure freezing, while cutting through frozen cells is extremely challenging (notice that small [< 300 nm], prokaryotic cells can be plunge frozen, just like protein solutions, and do not need sectioning).

Dubochet, Alasdair McDowall, and colleagues at University of Lausanne tried for years to optimize the different steps involved in this type of cellular work and developed the CEMOVIS method (cryo-EM of vitreous sections) that only a limited number of very skillful labs have been able to use successfully over the last two decades or so. The cryo-microtome often gives rise to artifacts, such as compression of the sections or the appearance of crevasses, and the handling of the frozen sections to get them into the scope is an art that few can claim to have mastered. Recently, a lot of excitement has been building concerning the cryogenic application of focus ion beam (FIB)-milling to prepare samples for cryo-ET.  Through FIB-milling, most of the frozen sample is “blown away” to leave a suspended lamella of cell accessible for cryo-ET analysis (as Elizabeth Villa, an expert practitioner of this technique at University of California, San Diego, says, “opening windows into the cell”). Pioneer efforts, like those in the lab of Wolfgang Baumeister, at the Max Planck Institute of Biochemistry have shown exciting results that are prompting the improvement of instruments available to scientists and their utilization in a growing number of energized laboratories. Examples of biological studies that reflect the promise of this methodology include those of nuclear pore complexes on the surface of the nucleus and different types of pathological aggregates in neurons.

The studies mentioned above were aimed at abundant structures, but when the lamella needs to contain a rarer (in space or time) cellular component, the milling needs to be targeted using correlative approaches (think, for example, of catching steps in a viral infection). In this type of study, the sample is observed using fluorescence of the target molecules to guide the milling process, followed by TEM visualization. Methods for correlative light and electron microscopy (CLEM), especially when they need to be followed by FIB-milling and cryo-ET, are still in their infancy and constitute the state of the art of what some call “cellular structural biology” (or should it be “structural cell biology”?). Stay tuned for future attractions featuring your favorite biological process.

This is not a historical account, by any means, and many more people than those I mentioned have contributed to the rise of cryo-EM to the singular place it occupies today. Furthermore, there were far too many papers to cite and it was too difficult to choose a handful, so I took the easy way out and cited none.