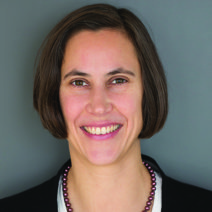 Sabine Petry, assistant professor, Department of Molecular Biology, Princeton University, and associated faculty member of both the Departments of Chemical & Biological Engineering and Chemistry, has been honored with the 2019 WICB Junior Award. The award recognizes newly independent, early-career scientists within seven years of their first appointment who show significant potential for making scientific contributions.

As her nominator Jean Schwarzbauer, Princeton University, noted, Petry was highly productive in two fields during her graduate school years and in her postdoctoral work. As a grad student with Venki Ramakrishnan, MRC Laboratory of Molecular Biology, she solved bacterial ribosome structures in different translation states, providing new information about how protein synthesis works. And during her postdoc with Ron Vale, University of California, San Francisco/HHMI, she made the unexpected discovery that microtubules can branch.

Ron Vale, who wrote one of the letters of support, said: “Sabine has a stellar record as a graduate student, a postdoctoral fellow, and is now thriving as a faculty member at Princeton. She has a great blend of characteristics: a willingness to take on important but challenging problems, a determination to succeed and patience to sustain a long-term effort, a good personality and ability to orchestrate collaborative efforts, and the intelligence to think deeply about her results. I also think that she is terrific role model for young scientists as well.”