Pride in Our Science 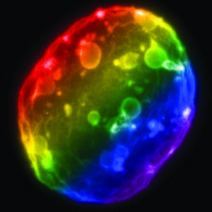 June was LGBTQ+ Pride Month, and the 50th anniversary of the Stonewall riots that shaped the modern Pride movement. Despite much progress, LGBTQ+ lives are still not well known by members of the larger community, many of whom have given little thought as to how these lives intersect with the world of an experimental scientist. The ASCB LGBTQ+ Task Force (ascb.org/committee/lgbtq-task-force) marked Pride Month with a series of blog posts giving much-needed insight into the lives of LGBTQ+ scientists.

Lee Ligon and Ashley Lakoduk asked “Why should ASCB blog about Pride?” Well, LGBTQ+ scientists can and do experience harassment and social isolation in academia, and LGBTQ+ students leave STEM fields at disproportionate rates. ASCB is committed to removing such barriers to success in the field of cell biology.

Bruno da Rocha-Azevedo highlighted the importance of LGBTQ+ visibility in the coming out process and told us how this drew him to help create this Task Force, a space for openly LGBTQ+ scientists to share their science and to be role models. The Task Force now includes members from all career stages and across the LGBTQ+ spectrum.

Ori Avinoam shared his story and reminded us that coming out is an ongoing process. This is a reminder that when a colleague or lab member comes out your hearty congratulations are welcome, but that they will likely still appreciate your support in the coming years.

Erica Gorenberg also emphasized the importance of role models, not only in daily life but also in science, and told us how the Task Force networking events helped her develop as a scientist. She also gave us some insight into the complexity of the LGBTQ+ community, and noted that by being open and accepting to all, ASCB can have a huge impact.

Claire Thomas highlighted some of idiosyncrasies of the transgender experience that are unique to the
scientific world and academic environment. She pointed out that transitioning is hard work and a huge distraction from the focus required for promotion and tenure, and suggested that universities and institutes should acknowledge and accommodate this in promotion and tenure decisions.

Derek Applewhite brought our attention to the concept of “intersectionality” and how there are added burdens that come from being part of multiple minorities. There is a whole tapestry of such intersections, and visible representation becomes even harder to find for these community members. By creating an openly accepting membership, ASCB provides crucial support to nurture everyone’s talent.

So where does the larger membership enter this process? Erik Welf reminded us that allies are important. Allies listen to, defend, and support the LGBTQ+ community, allowing us to bring our whole selves to our science. Many of us are or will be scientific mentors, and it does not take much to be aware, considerate, and engaged. You can easily make a difference, and even direct your ASCB donations to us!

Members of the Task Force not only have Pride in their LGBTQ+ community but are also proud of the fact that ASCB cares about diversity and inclusion. Please join us in our sixth annual LGBTQ+ Diversity Session at the 2019 ASCB|EMBO Meeting in Washington, DC, in December!

Claire Thomas is an Associate Professor of Biology and of Biochemistry & Molecular Biology at The Pennsylvania State University, University Park, PA. She and her lab are interested in the role of the cortical F-actin cytoskeleton in apicobasal polarity, protein trafficking, growth, and morphogenesis, working mainly in Drosophila. Email: clairet@psu.edu