Kenneth H. Downing, Cryo-EM Pioneer Who Solved the Structure of Tubulin and the Microtubule 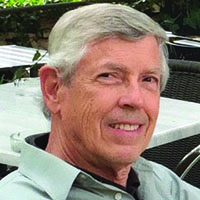 Kenneth H. Downing, a longtime ASCB member, passed away on August 2, 2018. His impact on science—and on the scientists who worked with him—was enormous, and he will be greatly missed.

Born in Chelsea, MA, Ken grew up liking electronics and with a passion for model railroads that would last a lifetime. He obtained his bachelor’s and PhD degrees at Cornell University. In 1977, after a postdoc at the Swiss Federal Institute of Technology, he began his lifelong career at the Lawrence Berkeley National Laboratory. Throughout his time at Berkeley, Ken made outstanding contributions to our mechanistic understanding of the cytoskeleton. He was also a key player in the development of high-resolution electron microscopy of macromolecules, producing technical advances that included spot scan imaging (which minimized beam-induced movement in the image) and dynamic focus correction (which overcame the need to correct defocus gradients across images from tilted specimens).

Ken’s most highly recognized scientific contributions are to have solved the structures of tubulin1 in 1998 and the microtubule2 soon after, which gave us a structural perspective on this unique self-assembly system and major target of anticancer agents. Ken’s numerous structural discoveries built on his exquisite use of state-of-the-art methodologies in electron microscopy and image analysis. They include, in addition to the tubulin and microtubule structures, describing the binding site and mode of action of the most broadly used anticancer agent, taxol,1 dissecting the mechanisms of the kinesin motor protein interaction with microtubules,3 describing the structure of the complex microtubule doublet within the axoneme of cilia and flagella,4 and visualizing the ciliary partitioning system,5 to cite a few. His outstanding work provided a structural framework for the understanding of molecular processes at the heart of cell biology. It also opened the door to new experiments in the biophysical characterization of tubulin assemblies, and made possible their analysis by theoretical and computational methods, unthinkable before these structures were known. In addition to these contributions to the biological field, Ken also made many others in material and polymer science.

In recognition of his scientific work, in 2010 Ken was elected Fellow of the Microscopy Society of America, for which he had served as president in 2000, and from which he also received the Distinguished Scientist Award in 2016. In 2015 he received the Berkeley Lab Prize–Lifetime Achievement Award, the highest honor from the Lawrence Berkeley National Lab.

But Ken was above all an outstanding mentor and role model for the students and postdocs who worked with him. I personally owe a debt of gratitude to Ken for having unjustified faith in me when he accepted me into his lab, and for giving me the chance of a lifetime to work under his guidance. Ken loved the pursuit of science, and transmitted a joy for day-to-day scientific work that is powered by curiosity, not hunger for recognition, that has left an enduring mark on all those who worked by his side.

Ken was universally respected and loved by everyone who knew him, both in science and in his very rich social and family life. We will miss his quiet and unpretentious brilliance and his gentle approach to everything, including conflict when it arose. We will miss his eye-opening scientific and technical insights. But most of all, I will miss Ken’s unique sense of humor and his never-fading kindness.