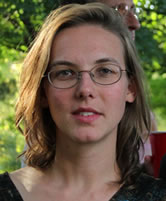 To be clear, E. Josephine Clowney, the 2014 winner of the $5,000 ASCB Kaluza Prize supported by Beckman Coulter, says she met her husband and learned to be a good scientist as a disc jockey for her college radio station. Leaving the husband part aside, Clowney explains the scientist part this way—playing all kinds of music on the highly-eclectic WCBN-FM at the University of Michigan (UMich) in Ann Arbor, including music she didn’t think at first was music, such as a Thai elephant orchestra with pachyderms soloing on gongs, opened her ears. Elephants and Elvis, the freeform music mix opened her mind to the unfamiliar, the eccentric, and the unconventional.

All this, says Clowney, stood her in good stead years later as a graduate student at the University of California, San Francisco (UCSF) when she joined the lab of Stavros Lomvardas to explore the enigma of olfactory sensory neuron (OSN) receptors. As shown by Richard Axel, Linda Buck, and Andy Chess, each OSN in mammals expresses one—and only one—receptor gene, which is keyed to recognize a small group of odorant molecules. Humans have hundreds of these olfactory receptor (OR) genes along with variant alleles while animals with keener smell such as mice and dogs have many more but it’s still one OR allele to one OSN with all the other OR genes in the nucleus somehow silenced.

To Lomvardas, this phenomenon could not be explained through a conventional deterministic regulatory model. Whether it was the Thai elephant orchestra or her undergraduate training in UMich labs or her two years at Rockefeller University as a research tech, Clowney claimed not to believe in transcription factors anyway. They wondered if the mechanism could involve physical organization of OR genes within the space of the OSN nucleus. Clowney launched an effort to use fluorescence in situ hybridization to fish out all the olfactory receptor gene alleles in the mouse OSN and to image their location in the nucleus as the OSN picked out its single odorant receptor protein “flavor.” She found that OR gene regulation was governed by a spatial reorganization of the genome inside the OSN nucleus. All the non-functional OR genes were pulled into interchromosomal aggregates, bound up tightly in heterochromatin, while the transcribed allele remained free. All of this was linked to levels of lamin b receptor (LBR) protein. Clowney found that the LBR protein is downregulated as the OSN develops its singular flavor. Adding LBR to an OSN broke up the interchromosomal aggregates, allowing the previously locked-up OR genes to start transcription.

The work took about 18 months, says Clowney, plus another year to walk the paper through submission, revision, and publication in 2012. In January 2013, Clowney took up a postdoc with Vanessa Ruta at the Rockefeller. The connection is, in genealogical style, through Clowney’s scientific grandfather Richard Axel—both Lomvardas and Ruta were postdocs in Axel’s lab. As Clowney explains it, “I tolerate New York. I’m here for Vanessa, who is an amazing scientist.”

Clowney lives in Rockefeller housing with her husband, Sean Schuster-Craig, the musician she met while DJ-ing at WCBN, who now makes a living making weird rock music under the moniker Jib Kidder, along with their toddler son, Sylas. One of four sisters, Clowney says she is immensely lucky to have two of them living nearby in New York. “They came to hang out with my son,” she says. “He is entertained and he is entertaining.”

Clowney is not entirely sure how she became a research biologist. Neither parent is a scientist. Growing up outside Grand Rapids, her taste for the practical and the scientific were cultivated by cooking with her mom and a series of good teachers at Rockford High School including an Earth Science teacher with the wonderful name of Starlene Mars, who required independent research projects grounded on reading the scientific literature first. Clowney, who has always gone by the name of Josie, says she gravitated toward biology labs in Ann Arbor. “One reason perhaps is that it’s possible as an undergraduate to actually do science but it’s not possible as an undergrad to, say, practice law.”

Clowney pretended for a while that she could be something other than a scientist, taking collegiate detours through Southeast Asian studies, art history, and math at UMich. On graduation, she decided that working in a research lab was the only vocational skill she possessed and was glad of a real job as a research assistant at Rockefeller with immunologist Jeff Ravetch. After that, she gave in to the inevitable and went west to UCSF for graduate school.

Clowney says she found out that she’d won the Kaluza Prize in a backhanded way. She opened a follow-up email from ASCB Communications and Education Director Thea Clarke. “I got this email from Thea that said, ‘Here’s what you need to do now that you’ve won this prize.’ I was like, ‘What prize?'” Clowney remembers. Only when she checked her cell phone did she see that ASCB Executive Director Stefano Bertuzzi had called several times to tell her that she’d been named the winner of the $5,000 prize. How is she going to use the money? For a long-lusted-after two-bedroom apartment.