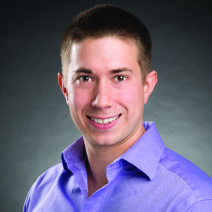 Eric T. Hall was named by the Molecular Biology of the Cell (MBoC) Editorial Board as recipient of the 28th annual MBoC Paper of the Year Award. As a graduate student in Esther M. Verheyen’s laboratory at Simon Fraser University in British Columbia, Hall was first author of the article “Actomyosin contractility modulates Wnt signaling through adherens junction stability” (Mol. Biol. Cell 30, 411–426). Hall is now a postdoc in Stacey Ogden’s lab in the Department of Cell & Molecular Biology, St. Jude Children’s Research Hospital, Memphis, TN.

“Previous work on Wnt signaling had shown that pathway output is influenced by actomyosin contractility that drives tissue and cell shape changes in developing tissues but had not fully explained the underlying mechanisms,” notes Richard Fehon, who served as Monitoring Editor of the paper. “Using a combination of genetic and cell biological approaches Hall et al. showed that myosin-generated cellular tension represses Wnt signaling by stabilizing E-cadherin–based adherens junctions, which in turn recruit and sequester β-catenin to the cell cortex. These findings add significantly to our understanding of the dual roles of β-catenin as an adherens junction component and a Wnt pathway transcriptional coactivator, as well as to how Wnt signaling is coupled to tissue morphogenesis in development.”

Hall will present his latest research in a Minisymposium at the ASCB|EMBO Meeting in Washington, DC. The MBoC Paper of the Year is selected by the Editorial Board from among papers published in the journal each year between June and May that have a postdoc or student as the first author.