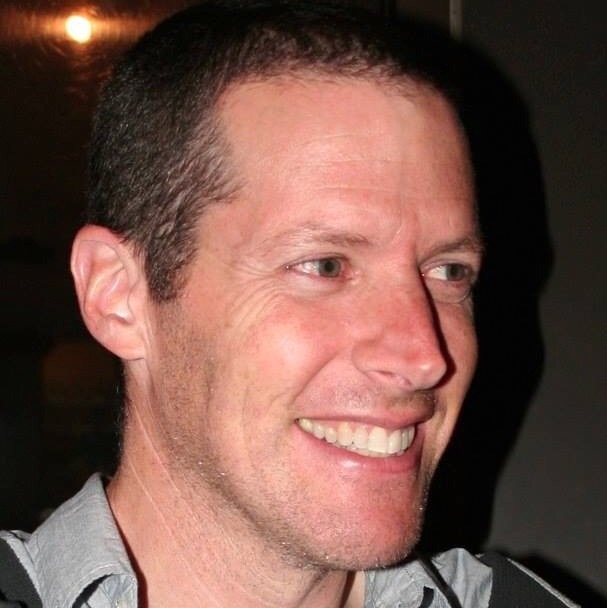 Many researchers have scientific idols but Bob Goldstein is one of the few with an actual shrine. Inside Goldstein’s microscope room at the University of North Carolina, Chapel Hill, there’s a small wall recess dedicated to the cell biology pioneer Ray Rappaport. It was Rappaport, a cytokinesis researcher and professor at Union College for over 30 years, who inspired Goldstein to pursue research, and nudged him toward developmental biology. Today Goldstein is an outside-the-box investigator, screen-printing and design artist, eloquent nonfiction writer, esteemed mentor, and more. Goldstein has diverse interests, and serious talent.

As an undergrad at Union College in Schenectady, NY, Goldstein liked biology’s puzzles, but wasn’t sure it would lead him to a career. Then he had a class with Rappaport. “It was the first time I felt like I knew what scientists did… it was a more creative activity than I imagined,” Goldstein said. Rappaport died in 2010. When the Goldstein lab was renovated a few years ago, he decided to turn an empty fire extinguisher recess into a memorial, enlisting his son to help him paint it. Finally Goldstein installed lights, a picture of Rappaport, and a sand dollar, which was Rappaport’s favorite model organism.

It was Rappaport who convinced Goldstein to “try” graduate school. The trial took him to Gary Freeman’s lab at the University of Texas, Austin, where for two years not a single experiment worked for Goldstein. “I wanted to try old fashioned embryology. I got some worms and started hacking away at the eggshells to try to get the cells out, but they wouldn’t divide. I found that someone had already developed a good culture medium for them—Lois Edgar… Lois had developed a medium for the cells and methods for getting the eggshell off. She was a research associate in Bill Wood’s lab at University of Colorado, Boulder. I was about to drive from Seattle to Texas, and I asked if could visit and learn from her. It was really very generous of her to do this, I tell her she gave me my career,” he said.

Goldstein went on to do a postdoc at the Laboratory of Molecular Biology in Cambridge in the UK, with John White, who was one of Sydney Brenner’s first students. “The day I arrived my advisor told me he was leaving,” Goldstein said. White had taken a position at the University of Wisconsin, Madison. Instead of feeling abandoned, Goldstein saw an opportunity. “John left behind all of the equipment, including the original confocal microscope used in biology, which he made. I had a lot of independence and a lot of equipment… I started to study cell biological things in C. elegans embryos. One project was how cell interactions can control cell division orientation and what the mitotic spindle looks like. Another was how the initial asymmetries are developed in the embryo,” Goldstein said.

His second postdoc took him to the University of California, Berkeley, and David Weisblat’s lab. It was here that he met his wife, Jenny, who was working on the same floor. In the Weisblat lab, Goldstein claims that his best ideas didn’t pan out and that he started applying for faculty jobs “before my failure became apparent.” His failure was not totally apparent to the University of North Carolina at Chapel Hill where he joined the faculty in 1999, opening his lab on the same floor as Kerry Bloom and Ted Salmon. Jenny Goldstein, who trained in genetic counseling after pursuing research, combined her interests and now coordinates research at Duke University on people affected by genetic diseases. 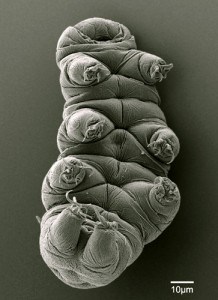 A waterbear. Image by Vicky Madden and Bob Goldstein.

Today the Goldstein lab focuses mostly on the cell biology of development using C. elegans, with different projects underway on a variety of problems. One group is focused on water bears (Hypsibius dujardini, also known as tardigrades or moss piglets), adorable micro-animals with eight legs. “I started working on them as a hobby, trying to find a model closely related to C. elegans and Drosophila to address a big interesting black box in evolution,” Goldstein said.

“I walked outside and got some moss and shook it off in some water, and got some water bears. They’re pretty much everywhere and they’re easy to find,” Goldstein said. Though now he uses water bears from a British company, due to their superior qualities. “[They] had characteristics that I wanted, they had small, clear embryos, and they divided pretty quickly. Like C. elegans we could see what’s going on,” he said. And like in C. elegans, Goldstein can do RNAi knockdowns, a technique developed in his lab. But it’s not always easy, many techniques have not been established for water bears. However, Goldstein sees them as an ideal system for investigating their evolution and development, and also the ability to survive extremes. “If you dry them out they can survive over a decade, they can survive below one Kelvin [−459.67 °F], you can heat them above boiling, they can survive the vacuum of outer space,” Goldstein said, “though when they’re wet you can just squish them and they’re dead,” he admitted.

The research associates in Goldstein’s lab were selected through his atypical approach. “People who work in the lab really come with their own ideas. My PhD advisor convinced me that people who are new to a field have more novel ideas than people who are in it. So I feel like the best thing I can do is to take people that have independent ideas and help them find what’s a tractable experiment and what’s not… Though if I tell them it’s a bad idea and their gut tells them to do it, I tell them to do it anyway,” Goldstein said.

His students and former students found the Goldstein system refreshing. “Bob created a rich research environment in which we had the freedom to tackle any question that was of interest to us. He always said that he tried to treat his grad students like postdocs, and his postdocs like colleagues, and I believe that he did just that. We had a lot of independence, and because we [in the lab] were given the freedom to choose our own projects, I felt that we were deeply invested in our research,” said Minna Roh-Johnson, former graduate student in the Goldstein lab and now postdoc at Fred Hutchinson Cancer Research Center.

Cell shape changes are another focus of his lab’s interest, says Goldstein. “That was started by one graduate student, Jen-Yi Lee, who was interested in morphogenesis…. This was a case where I was not encouraging her to do the experiments, but I’m glad she did. So then she set up this in vitro system where we could see cells going from the surface to the inside of the embryo during gastrulation. There was an interesting cell shape change where the apical side of the cell would shrink to nothing, which would internalize the cell,” Goldstein said. Now the lab is screening C. elegans homologs of genes that control mammalian neural tube closure, which is an apical shape change as well, he said.

Reached at the University of California, Berkeley, where Lee is now a Microscopy Research Associate, she said that the Goldstein lab featured both great science and great fun. Not only did Lee learn about hypothesis testing and experimental design, she recalled her mentor as “a very fun guy with lots of unique hobbies and passions outside of the lab.”

These interests include literary essays and graphic arts. Goldstein has a solid record of papers on PubMed but he also pursued a different kind of writing. Recently Nautilus, a new science magazine for the general public, published Goldstein’s riveting account of how Francis Crick and Sydney Brenner were scooped by Marshall Nirenberg in the decoding of the genetic code. It was Nirenberg who first published a decoded triplet codon and in the eyes of many contemporaries stole the thunder from Crick’s long awaited solution to the DNA puzzle. Goldstein said he was “fascinated by this moment when Crick found out about Nirenberg. You can see it as a moral dilemma, and yet Crick’s instinct was to promote Nirenberg.” Goldstein wanted to explore that story, and to prepare himself he took a short nonfiction writing course at Duke University, before setting up an interview with Sydney Brenner.

Brenner was not an easy interview. In the article, Goldstein describes arriving at Brenner’s modest house in England. “He’s well known to speak in animated tones about science, not money, and his house was modest. I felt oversized eating at the table in his tiny kitchen, where plates and mugs lined open shelves and I could reach the refrigerator from my seat,” Goldstein wrote. But even after much pressing by Goldstein, Brenner seemed happy for Nirenberg’s 1961 discovery that earned a 1968 Nobel Prize in Medicine. (Brenner won his Nobel in 2002 for his work on turning C. elegans into a gold standard lab organism.) 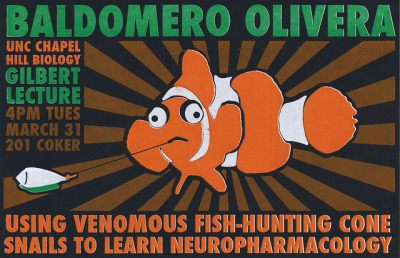 A science ‘gig’ poster Bob Goldstein made with his sons.

Goldstein’s talent for science communication also has a strong graphic dimension. Goldstein designs and screenprints science ‘gig’ posters for his department’s Distinguished Speaker Series. “We had a hard time getting speakers to come, so we decided to invent a distinguished seminar series. The only that distinguished [the lecture series] is that we called it that. It’s working well for getting people to come,” Goldstein revealed.

The poster idea came to him from local telephone poles. “Chapel Hill has a nice music scene, and I knew there were people making gorgeous concert posters displayed out on telephone poles. I loved these things (screen prints), so I asked if some people would make them. A couple of friends showed me how to do it, so now we have a workshop behind our house,” Goldstein said.

“One thing I find a little bit frustrating about science is that at the end of the day you haven’t made anything. Hopefully you have, but not something tangible often. A paper comes out, it’s satisfying, but I had a neighbor who worked in construction, and every few months there would be a new house. My kids and I have the same urge [to make things], so we end up making things that no one needs,” Goldstein said.

“Every Christmas break we make something. We made a chicken coop a few years ago. This year we made a portrait of Gandhi out of beer bottle caps. Each bottle cap is a pixel,” Goldstein said. He collected thousands of caps for the project from local bars, despite his sons, Duncan (11) and Connor (9), encouraging him just to drink more beer. “I never want to see another beer bottle cap,” he announced.

Goldstein is also famous, at least in Chapel Hill, for his lab parties. As Roh-Johnson recalled, “Once he booked a local bluegrass band to play in the lab, literally in a bay of the lab, to celebrate the lab’s 10-year anniversary.” For Lee, Goldstein was an alternative model of a life in science. “Bob not only taught me a lot about science, but also about the importance of having work-life balance,” Lee said.

Diversity Keynote Given by Michelle Estrada