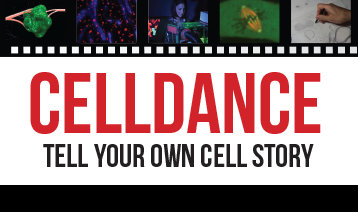 What would you tell the wide world about your science? Celldance 2016 will give three ASCB member labs the chance.

Edison Leung and colleagues at Albert Einstein made a Celldance video last year. Here are his tips for thinking in video terms and for talking to a broad audience.

This post was originally featured on The Doctor’s Tablet, the blog of Albert Einstein College of Medicine.

One of my favorite shows to watch as a kid was Bill Nye the Science Guy. I fondly recall being glued to the television as Bill enthusiastically explained the mysterious wonders of the universe with all of his props, gizmos and gadgets. Unlike science teachers at school, whose seemingly endless lectures bored me, Bill Nye’s hands-on, interactive approach held my attention. He simplified complex science concepts so well that even an 8-year-old, English-as-a-second-language learner could understand them. It was awe-inspiring.

As an MD/PhD student at Albert Einstein College of Medicine, I carried Bill Nye’s enthusiasm for science with me, but not his skill at explaining science to a lay audience. And yet a video that I worked on, Spying on Breast Cancer Metastasis, has now been featured on the blog of Francis Collins, director of the National Institutes of Health, and has received national recognition. The video-making process helped me understand the importance of communicating science to nonscientists and I think it offers valuable lessons for other young researchers.

As a graduate student in the lab of John Condeelis, I worked early in the morning and late into the evening doing what I found fascinating—imaging breast cancer cells as they spread. Everything in the lab made sense to me. But at home I would struggle to explain to my wife, a college career advisor, what I’d done all day. All the technical details about mouse work and assays left her feeling confused. I was disappointed that I couldn’t fully share how exciting and important I felt my work was.

In the late summer of 2015, the American Society for Cell Biology (ASCB) invited member scientists to submit proposals to the Celldance competition. Winners would get funding to produce films highlighting their research. Frustrated at not being able to communicate science in a manner that was more understandable to my wife and family, I immediately sent a proposal to Celldance. I was overjoyed to be one of three scientists chosen by ASCB. One problem: Although I was proficient at capturing live images of cancer cells inside breast cancer tumors, I had no experience in making a video for a broader audience. I reached out to Einstein’s department of communications and public affairs to help produce the film. Working on a daily basis with Sunita Reed, Einstein’s video producer, I was coached to communicate my thoughts and scientific knowledge using a different approach.

Joining me in the video production was postdoc Allison Harney, who also works in the Condeelis lab. We learned that as scientists, we tend to communicate in highly technical terms because the details are important to us in understanding the phenomena we study. Those same technical terms, however, can cloud the overall points we are trying to convey. Being scientifically accurate while conveying the story in a clear fashion to our peers and to a general audience was the delicate balance that we strived for during the production of the film. Once this balance was achieved, we had a beautiful product in which science and storytelling were combined.

During production of the video, I learned how people, in general, absorb new information. Everyone, I realized, wants facts conveyed in a clear and engaging manner. By following the steps below, I have found that discussions of my research are now much more enjoyable for my peers in the lab and others outside science.

1) Engage people early on by giving them an enthusiastic and catchy introduction. Tell them why this subject you are studying matters.

2) Use analogies. Analogies make complex concepts easier to understand. Our video, for example, used espionage as a theme.

3) Tell a story. Create a clear narrative by framing your topic in broad terms first before delving into the more technical terms.

4) Use images whenever possible, even if they are hand-drawn cartoons.

5) Drop the jargon. If you must use a technical term, explain it. Our job is to communicate our ideas so that our audience is not struggling to figure out what we are saying.

Communicating science to the public is important because we live in a time in which science is increasingly being doubted (as evidenced, for example, by the mistaken belief that vaccines cause autism in children). Without a new generation of scientists who can communicate clearly to the public and to other scientists, we are going to be in for some difficult times ahead in which our progress as a nation will be hindered.

Just being accepted to Celldance was something that made me proud. But the finished video reminds me of the joy of watching Bill Nye as he pulled me into his stories while entertaining and educating me. I hope he would approve of our film. Still, the best reaction came when I showed the film to my wife and her face lit up with joy as she finally understood what I was doing in the lab. Nothing beats that!

Edison Leung is a 6th year MD/PhD student at Albert Einstein College of Medicine. He currently is pursuing his PhD in John Condeelis' lab where he is studying how breast cancer metastasis occurs. He is often spotted at the Einstein's Falk Recreation Center playing table tennis.