E.E. Just Lecturer Tells URM Scientists, “We Need You and We Need Your Ideas”

The ASCB’s E.E. Just Award comes with a medal, a named lecture, and a two-edged message for minority scientists today, according to this year’s winner, Daniel Cólon-Ramos of the Yale School of Medicine.

E.E. Just Awardee Daniel A. Colón Ramos spoke on “A Need to Connect: The Cell Biology of the Synapse and Behavior.”

The lecture is in honor of Ernest Everett Just, an early 20th century African-American scholar who, against all odds and the crushing racial prejudice of his day, made key discoveries in the emerging science of cell biology. Speaking in San Francisco at ASCB 2016, Cólon-Ramos said that after being selected for the Just award, he looked into the namesake’s life and was struck both by Just’s academic achievements as a member of what is now called an underrepresented minority (URM) in science and Just’s insistence on being defined, first and foremost, as a scientific researcher.

Then and now, this is the “sinister” side of being a minority scientist, said Cólon-Ramos. Sometimes you are known by your URM identity first and as a scientist second. Cólon-Ramos said that Just made significant discoveries at a critical moment in cell biology about the role of extracellular context yet his research has been overshadowed by Just’s virtually unique status at the time as an African-American, PhD-trained biology professor.

“All scientists come from somewhere and that somewhere influences how science is done,” Cólon-Ramos allowed. Being born and raised in Puerto Rico has had an effect on why and how he pursues research, believes Cólon-Ramos.1 Yet to truly honor Just’s achievements as a researcher, Cólon-Ramos told the packed room at ASCB 2016 that he would devote most of his lecture to the cellular neuroscience research that he conducts at Yale, particularly his work on finding an unexpected role for glial cells in controlling the formation of synapses2 and in how glycolysis acts as a backup energy resource for synapses under energy stress.3

Protoplasmic Kisses
At Yale, Cólon-Ramos holds a joint appointment in Cell Biology and in Neuroscience. “My interest is in understanding the cell biology of synapses at two levels. One of them is how synapses are established during development, that is, how are they built to sustain the architecture that allows us to understand the world around us, to be able to form memories? How are they able to process physical information as perceptions?” To get at the cell biology, the Cólon-Ramos lab uses the worm Caenorhabditis elegans as its model organism, because so much is known about its genetics, its developmental pathways, and even its complete connectome. Yet so little is known about a basic element of C. elegans neuroscience—how its synapses form or change.

First in Spanish and then in English, Cólon-Ramos quoted the so-called founding father of neuroscience, Santiago Ramón y Cajal, and his first-ever description of synapses as “protoplasmic kisses that appear to constitute the final ecstasy of an epic love story.” Whether through love or protein chemistry, Cólon-Ramos sees the formation of a synapse as “the final step of a series of decisions by two different cells to meet in one place and one time.”

“How is it that these same synapses are maintained as the animal grows? A lot of this development happens early in the animal’s lifetime but [is] maintained throughout life.”  Cólon-Ramos said his lab is also trying to understand how synapses are modified by experience. There is an organic tension here, he explained, between the plasticity needed to build and modify synaptic circuits and the fidelity that has to maintain essential synaptic architecture

A Scientist First
Only in the last minutes of his lecture did Cólon-Ramos return to E.E. Just. Cólon-Ramos said that in the early years of the 20th century, Just’s most supportive mentors advised him to forgo scientific discovery and concentrate instead on training future generations of URM scientists at Howard University. Just would not settle for that. “Many of his friends told him, why are you making your life so difficult? Go back to Howard and teach,” said Cólon-Ramos. Yet Just spent every summer at the Marine Biological Laboratory in Woods Hole, MA, and later at research stations in Italy and Germany, running experiments and writing papers. His published results laid out fundamental insights into the effects of the extracellular environment on cells, according to Cólon-Ramos. Most cell biologists of Just’s time were fascinated by the cell nucleus, where new staining techniques had made the chromosomes visible for the first time. Just studied the outer cell membrane, working with living cells as they divided and exploring the influence of their context in extracellular space. It would be the early 21st century before cell biologists began to realize what Just had seen in the early 20th century—that extracellular context was a powerful force in development and in disease.

Cólon-Ramos said that Just was able to make these amazing discoveries because allies and sympathetic institutions like the Marine Biological Laboratory created space for him where Just could be a scientist first and an African American second. Still Cólon-Ramos could only wonder what more Just might have discovered without the burdens of his primary teaching load, his lack of access to year-round lab space, and the aggressive racism of his age. One of the curious things about science, said Cólon-Ramos, is that progress can be “asymmetrically impacted by individuals, those individuals who bring with them their context, their ideas, their calling” to the problem at hand. A single scientist can turn a field in a new direction or make a connection that no one had ever noticed. Turning away an individual from science because the face or the background doesn’t match the conventional picture of a likely candidate has “an opportunity cost,” said Cólon-Ramos. “That’s what we’re missing because of biases in science.”

A Revolutionary Statement
In that context, Cólon-Ramos declared, “Being a scientist from a URM group is a political statement.” Like Rosa Parks, the civil rights leader who refused to give up her “whites only” seat on a segregated bus, E.E. Just moved into a space—a research laboratory—that an African American was not supposed to occupy. “Back then, that was a revolutionary statement,” Cólon-Ramos said. “Today there are still spaces that minorities cannot readily access.”

Speaking directly to students in his audience, Cólon-Ramos warned that there were going to be moments in their careers when they would feel discouraged and wonder if they belonged in science. This is particularly true for URM students, he said. Here Cólon-Ramos explained that he was using this term URM broadly, referring not only to traditionally underrepresented minorities in science such as African Americans or Latinos but also to include immigrants from developing countries, women, LGBT individuals, and others who worry that people like themselves don’t really belong in research. Cólon-Ramos declared, “If you’re questioning whether you belong in science, you do. If your calling is research, we need you and we need your ideas.”

Coming from Puerto Rico where there were so many glaring social needs, Cólon-Ramos recalled, “Frankly I felt I was being egotistical in my pursuit of science because I thought I could better serve my community in other ways. It needed doctors, educators, and leaders in certain areas.” Being a research scientist today, Cólon-Ramos realizes that there are many ways of having an impact on communities. A URM scientist can have an effect beyond a single career or even an individual life. “I’m not just talking about the people here. I’m talking about people who haven’t been born yet,” he said. Science needs people like you, said Cólon-Ramos, much like science needed E.E. Just. 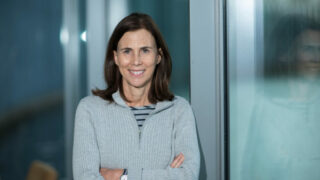 E.B. Wilson lecture to be presented by Jennifer Lippincott-Schwartz