ASCB 2015—Exploring the Frontiers of Cell Biology in San Diego 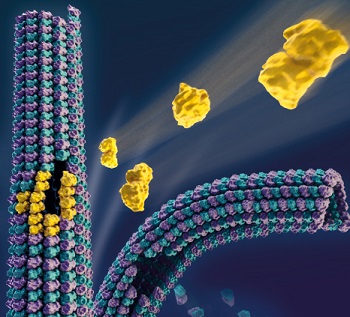 Microtubules with a repair site shown in yellow. Illustration by Manuel Théry.

Cajal bodies, snurposomes, Balbiani bodies, magnetoreception—terms both familiar and obscure and the new science behind them were flying fast and furious at ASCB 2015 as speaker after speaker expanded the definition and extended the frontiers of cell biology. The meeting’s traditional themes of cell structure and mechanism were explored in depth, but running through the 367 talks and 2,428 posters over five days in San Diego was a new appreciation of scale across biological systems.

Headlined by CRISPR/Cas9 applications, word is out that a new era of applied cell biology is dawning, drawing an exotic mix of attendees including ecologists, engineers, virologists, marine biologists, and more. Extraordinary talks highlighted the potential for organisms in manufacturing, a role for viruses in immunity, and a host of unfrequented cell structures and processes.

Manuel Théry dazzled a Minisymposium audience on Sunday, December 12, with his images showing that stressing microtubules makes them stronger. Microtubules have traditionally been thought of as a stack of blocks: You can stack one on top of another, but if the tower gets damaged you have to start stacking from the point of damage. But Théry and colleagues at CEA in Grenoble, France, found that bent microtubules could tack on tubulin dimers to repair themselves. These microtubules that were “softened” by bending could then become as firm as they were before injury.

Théry’s work also shows that after injury those damaged sites became stronger. If the microtubule was later depolymerized, the depolymerization would halt at the repair sites. Further, networks of damaged microtubules grew more than networks of undamaged microtubules. Théry speculated that this could allow microtubules to be mechanosensitive, that is, their growth could be biased without any signaling. This has important implications for cell growth, movement, and developing cells, he believes.

One of many exciting talks that presented insights into human health and disease was presented on Sunday by Begum Erdogan of Vanderbilt University. She showed how cancer associated fibroblasts (CAFs) clear a highway through the extracellular matrix (ECM) for migrating cancer cells. Erdogan showed that CAFs arrange a roadway using parallel fibers of fibronectin (Fn), a major protein in the ECM mix secreted by all fibroblasts. Taking cancer cells grown from prostate as well as head and neck tumors, she plated them on ECM from CAFs and non–cancer associated fibroblasts (NAFs). The cancer cells on the CAF matrix were better at moving in a single direction.

Using traction force microscopy, Erdogan showed that CAFs are able to rearrange the matrix because they get a better grip on Fn fibers. CAFs were stronger than NAFs because they were better at delivering force from the motor protein myosin II through integrins to Fn fibers. CAFs had higher levels of a Fn-binding integrin plus a switched-on Rac GTPase, which is critical to cell movement. Inhibiting myosin II activity with a drug deprived CAFs of their super traction powers, and the ECM reverted to its normal state of disorder.

Forest Rohwer of San Diego State University continued his campaign to rebrand bacteriophages, viruses that infect and replicate within bacteria. At the “Embraces across the Species Barrier: Complex Cell Interactions” Symposium on Monday, Rohwer presented the growing case for bacteriophages as the first-responders of a healthy immune system. Once tolerated as harmless inhabitants in the jungle of microorganisms that thrive in human mucous, bacteriophages are emerging in a new light, Rohwer said. He told the audience that bacteriophages help humans and many other organisms fight off invading bacteria by using mucosal surfaces as stalking grounds. Bacteriophages, Rohwer said, are terrific hunters of bacteria. 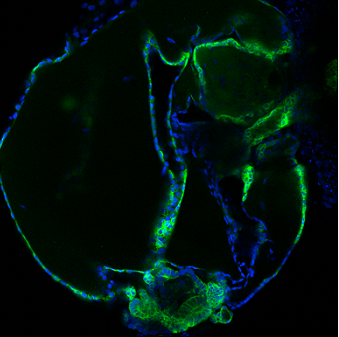 “What’s happening is that the phages are sticking to mucous, and when the bacteria come in to attack the tissue layer, the phage kills them off. The phages have specific domains to hold onto the mucous,” Rohwer explained. His lab’s latest data show that there is an advantage for the phages sticking in mucous. The mucous-embedded phages come in contact with potential bacterial hosts more often than those that are moving freely by Brownian motion, thus they become better “hunters.” This search strategy is particularly effective at the low bacterial concentrations found deep within mucous layers, Rohwer said.

Also on Monday, during “The Role of the Cytoskeleton in Disease and Repair” Minisymposium, Benjamin Freedman of the University of Washington described how he used CRISPR/Cas9 to guide human pluripotent stem cells (hPSCs) into becoming a human cell–based lab model system for polycystic kidney disease (PKD). The most common inherited kidney disorder, affecting one in 500 Americans, PKD currently is not curable and, without long-term dialysis or kidney transplant, is fatal. PKD’s hallmark is the formation of damaging, balloon-like cysts in kidney tubules. In the early 2000s, cell biologists linked cyst formation to gene mutations that affect the primary cilia. These fundamental discoveries were made in nonhuman organisms such as the alga Chlamydomonas reinhardtii and the zebrafish, Danio rerio. But the exact disease mechanism in humans is still not well understood in part because there hasn’t been a good human model of PKD in kidney cells.

CRISPR gave Freedman a more precise tool to remodel the hPSC genome to include PKD mutations in the disease-linked genes, PKD1 and PKD2. He used a 3D cell culture system to coax mutant and healthy hPSCs into differentiating into kidney progenitor cells and finally into the proximal tubule cells found in kidney nephrons. He observed the formation of large, translucent cyst-like structures in the mutant tubule cells but not in healthy controls. These observations and others have convinced him that the CRISPR/Cas9 and hPSC system produces a stable, biologically accurate human model for a common genetic disease where new understanding and new therapies are desperately needed.

“Can you give genetic information to nonbiological materials?” That was the question posed by Angela Belcher of the Massachusetts Institute of Technology in a Symposium on Tuesday. Belcher explained how she was inspired by the abalone. Binding calcium carbonate and protein, the abalone creates templates for incredibly strong (and beautiful) shells, she said. Belcher’s lab is trying to use similar genetic control over nonbiological material production. Belcher showed a virus built in her lab that serves as a superhighway for current to make a high-powered cathode. They’ve also used bacteriophages to build gold wires for fuel cells. Most recently, the lab has developed carbon nanotubes, stabilized by M13 virus, in an improved image-guided surgery to remove ovarian tumors. 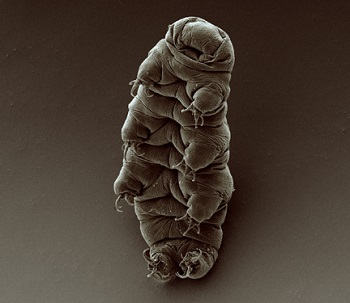 Tuesday’s “New Technologies and their Application to Probe the Spatial Organization of the Cell” Minisymposium featured talks about several of the cell’s lesser-known compartments. Marina Feric from Princeton University explained that cells are full of membrane-less compartments, including the nucleolus where a liquid-like matrix of Cajal bodies attaches to non–membrane-bound snurposomes (containing snRNPs: small nuclear ribonucleoproteins) in amphibian oocytes. Her work showed that these components of the nucleolus act as distinct liquid-like subphases that are stabilized by a nuclear actin network.

In the final Symposium on Wednesday, December 16, “Beyond the Five Senses: Detection of Magnetic and Electric Fields,” Arash Komeili of University of California, Berkeley, explained his research on magnetoreception at a cellular and molecular level. Komeili investigates magnetotactic bacteria, which he said use this trait as a strategy to find nutrients in an aquatic environment. By orienting with the earth’s magnetic poles, they have to swim in only two directions instead of three, he explained.

Komeili and colleagues have identified a number of proteins involved in forming and regulating magnetosomes, organelles containing iron crystals mineralized by the bacteria that help them orient. Most recently the researchers have identified MamE and MamO, HtrA proteases that regulate biomineralization. MamO plays two roles in the process, Komeili showed, in metal-binding that is required for the nucleation and in MamE activation. And though his work has focused on bacteria, he admitted at the end of the talk that he’s an animal magnetoreception hobbyist.

And the Winner Is…

Tardigrades are eight-legged, water-dwelling microanimals that have no known magnetotactic abilities (as yet), but they were the surprise hit at ASCB 2015 as research models. Tardigrades (also known as water bears and moss piglets) are champs at surviving extremes, including boiling, freezing, radiation, and drying out. Thomas Boothby of University of North Carolina, Chapel Hill, presented new data showing that tardigrades have specific genes that are upregulated in response to desiccation. The proteins encoded by these genes lack secondary structure in liquid but become well-defined helicies and form a biological glass when dried. Boothby showed that analogs of these proteins also help yeast and bacteria tolerate drying environments. Boothby suggested that tardigrade bioglass proteins could be used to preserve vaccines without refrigeration.
With all the new techniques and new frontiers presented in San Diego, the tardigrade easily walked away with the unofficial title of most promising (and visually the cutest) model organism of the year.