Women in STEM: Still So Few and Far Between 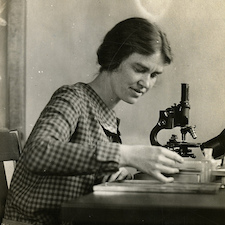 Margaret Mann Lesley (1891-1988) was a pioneer as a woman in biology. Smithsonian photo.

The environment of women in STEM

Why are there so few women in STEM disciplines? This is by no means a new issue. In fact, in 1965, Alice S. Rossi published an article in Science entitled, “Women in Science: Why so Few?” The article states that, as a nation, we must be sensitive to the “social handicaps” imposed by gender issues. This idea still holds true today. Importantly, the article also states that women who have made it to the top of their professional fields likely had “extraordinary motivation, thick skin, exceptional ability, and some unusual pattern of socialization” in order to reach these positions. The fact that this statement is still true today raises many issues. Why do women need to have these exceptional qualities to obtain a position that a man could probably secure much easier?

While great efforts have been made to encourage women to pursue STEM jobs, there are still so few women in science 50 years since this article was published. According to a 2010 American Association of University Women (AAUW) report, the main reason for this phenomenon lies in our perceptions and unconscious beliefs about gender in mathematics and science. In particular, the study looks at the factors contributing to the disparity between the numbers of men and women in these fields. These factors can be divided into three areas: 1) social and environmental factors shaping girls’ achievements and interest in math and science, 2) the college environment, and 3) the continuing importance of bias, often operating at an unconscious level. The existence of these factors very early on in young girls’ training in STEM fields indicates the urgency of acting on their behalf while they are still in college or even earlier. Some of these factors are debatable (as discussed in the next paragraph). Nevertheless, this report urges us to cultivate the achievements, interests, and persistence that young girls may have in the fields of science and engineering, while creating supportive college environments and counteracting gender bias.

According to an article published by the Harvard Business Review in 2015, if we can interest more young girls in STEM subjects, the issue will resolve itself over time. This is the so-called pipeline issue, a popular hypothesis that might explain the low numbers of women in STEM. While the evidence for this hypothesis has been relatively thin, gender bias is now becoming a more likely reason for driving women out of STEM careers, as indicated by two studies published in PNAS, one study in 2012 and another in 2014. But the pipeline may not be the (only) issue affecting women in STEM, and this issue may also not apply to all STEM disciplines. In the biomedical workforce, women with advanced degrees hold fewer NIH-funded independent investigator positions. Therefore, in spite of women holding a similar degree to men in the same STEM field, their leadership opportunities in STEM may be limited. The same 2010 AAUW report mentioned above gives recommendations to attract and retain female faculty, including conducting departmental reviews to assess work climate, providing faculty mentoring, and supporting faculty work-life balance. Work-life balance is another theory, albeit with little supporting evidence, for why there are so few women in STEM. This theory suggests that women choose to forgo careers in STEM to attain better work-family balance—rather than being pushed out by gender bias. This may be true, especially in mathematics, where women may actually experience gender fairness. Overall, the reasons for why there are so few women in STEM may be a combination of all these factors, and may also be STEM field-dependent.

What can be done to prevent women being discriminated against in STEM disciplines? Many scientific societies have means to address these issues. The mission of ASCB’s very own Women in Cell Biology (WICB) committee is to promote gender equality and diversity in the field of cell biology. As a member of the WICB Network since 2009, I am inspired by their many initiatives, including one to showcase photos of women cell biologists with their families or pursuing favorite activities. Seeing successful women scientists with thriving family lives outside of the lab is very encouraging for young women thinking about pursuing a STEM career, and for junior scientists who have recently begun working in STEM fields. In addition, WICB provides career development programs, mentoring, speaker lists, achievement awards, childcare grants and web-based resources for all ASCB members.

Another great organization supporting women in STEM is the Association for Women in Science (AWIS), the largest multi-discipline organization for women in STEM. AWIS is dedicated to driving excellence in STEM via its strategic plan, which encompasses three main pillars. The first pillar is to achieve positive system transformation, which includes driving positive change, reducing barriers, and advancing women’s leadership in STEM. The second pillar is to promote leadership and talent development, which is focused on enabling women scientists and engineers to develop leadership and technical skills necessary to advance their careers. Finally, the third pillar is to build organizational capacity to ensure sustainability and long-term impact of AWIS programs, including those with outside partners. In addition, AWIS offers many resources, including communications, social networking, as well as professional development for graduate students and postdocs.

Besides the efforts put forth by these scientific societies, having real-life examples of women in STEM as role models to inspire us to pursue these careers is a must. My own experience points to one particular faculty member with whom I have had the pleasure of interacting. Isabel C. Escobar is both an accomplished female scientist and an advocate for women in STEM. In my next blog post, Escobar shares her views on current issues affecting women in STEM. She also discusses her involvement with AWIS as an organization, including the initiatives taken by AWIS to encourage more participation of women in all STEM fields.