Biomedical training for graduate students and postdocs can be enhanced by attending career seminars and professional development workshops, as well as through conversations with research mentors, teachers, laboratory peers, or classmates. In addition to universities, several scientific societies (including ASCB, AAAS, AWIS) and companies (SciPhD, STEM Career Services and others) offer many useful career development resources for graduate students and postdocs. However, biomedical training for young scientists needs to be further improved by providing information and resources for both academic and non-academic career paths, the latter becoming the career outcomes for 90% of biomedical PhDs. 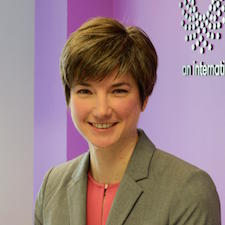 Can you describe your career path leading to your position at ASCB?

I received my PhD in Biology at the University of Virginia. I decided during graduate work that I did not want to stay in research but was interested in science policy. Instead of a postdoc I found an internship at the National Research Council’s Board on Biology working on designing a website for a conference on biodiversity. This resulted in my being hired as a research associate in the Office on Public Understanding of Science at the National Academy of Sciences (NAS). This move shifted my path to science outreach. I then worked my way up to becoming the Director of the Office at NAS. After being Director of the Office for about a year, NAS received a major gift from Daniel Koshland to open a museum. I initially collaborated with the Director of the Museum, and then moved over to the museum, first as the website manager and then as the Deputy Director. In this role I oversaw the development of exhibitions, educational field trips, public programming, and the museum website. Toward the end of my time at the museum, I was selected as a Fellow in the Noyce Leadership Institute (NLI). This was an intensive year-long program aimed to help museum professionals lead change in organizations to move them from “nice to necessary” for their community. This made me interested in leadership positions in non-profits. After 10 years at the museum I left to open my own consulting business, but before I got that off the ground I was recruited to the American Society for Microbiology (ASM) as Director of Communications and Marketing Strategy. I stayed there for almost 3 years before coming to ASCB.

How can graduate students and postdocs transition into non-academic careers?

Graduate students and postdocs who are considering a career transition should differentiate themselves from their peers by seeking experiences in their career of interest, demonstrating leadership skills, networking with professionals in their target field and, if they are interested in non-research careers, creating a resume (not CV).

What is an effective strategy for trainees to gain information about specific non-academic careers?

I always recommend that trainees do informational interviews. These are 30 minute in-person or phone interviews with people who work in fields that you are interested in. Most people are willing to talk about themselves for 30 minutes so it isn’t too hard to arrange such an interview—just make sure to have your questions organized in advance so that you make the most of their time. If the conversation goes well you can send your resume to them, but there should be no expectation that a job will materialize based on the informational interview.

What other resources can trainees utilize to learn about non-academic careers?

There are a lot of resources on the internet that can help trainees learn about their career options. You can start at ASCB’s Career Development page. The ASCB Career Perspectives page also has many profiles of scientists who have moved on to various non-academic careers. You can also attend the career development events at the ASCB annual meeting, including the career panels on many non-academic career paths.

How does ASCB enhance non-academic career training for young scientists?

ASCB offers many programs that can help young scientists get the training they need to be successful in their careers.

At the ASCB annual meeting we offer:

Outside of the ASCB annual meeting we offer:

ASCB is also active in policy issues related to the scientific workforce by several avenues, such as via the Public Policy Committee.

Which skills enable trainees to be successful in non-academic careers?

A huge advantage of someone with a PhD is the ability and eagerness to learn new things and be a critical thinker. This may feel like a universal skill if you are in academia, in which you are surrounded by people with those abilities, but these skills are not as common as you may think outside of the academic enterprise.

Scientific training also provides many transferable skills for outside of academia. Project management is one great skill—many organizations need people who can run programs or projects so the ability to lay out a realistic plan of action and execute it is very valuable. Also, if you have overseen an undergraduate or graduate student then you have developed human management skills. Oral and written communication is also an essential skill. You will want to practice communicating to non-scientific audiences and look for training opportunities such as like the elevator speech competition at the ASCB meeting to improve your communication skills.

Which activities should trainees engage in for successfully transitioning into non-academic careers?

This is highly dependent on what you want to do. The biggest differentiator I see in resumes is between people who seem generally interested in their new career path and who have actively sought out opportunities to get involved in activities that would allow them to learn more about that career path. This is as opposed to people who have focused solely on their research and have done one minor activity in the last three months, which then appears as an afterthought.

How can trainees network toward desired non-academic careers?

Networking for research careers is built into the scientific endeavor. Presenting posters, talking with seminar speakers, and attending scientific meetings are all great opportunities for networking. If you are moving outside of research then you will have to be more proactive in finding networking opportunities. Depending on your career of interest, you may be able to find people in your local area with whom you can network via informational interviews. Make sure you ask who else you should speak with at the end of the each interview so that you come away with a couple of more names to expand your network. You can also look for conferences in your career of interest—for example, many science writers attend the National Association of Science Writers meeting. The AAAS meeting is also a great resource for science policy and science communication, while broader impact professionals attend the National Alliance of Broader Impacts meeting. I received my first internship by attending the AAAS meeting in order to have lunch with a potential mentor. At the time it was a stretch financially, but I slept on a friend’s floor and met people who are still in my network.

How can graduate students and postdocs make their resumes stand out for specific non-academic careers?

If you are going into a non-research career then you will need a resume, which is very different from an academic CV. Resumes present information in reverse chronological order, and often have a goal statement at the top. For a resume, you can tweak the goals to fit the organization you are applying to. Under each position, you should have a bulleted list of your major accomplishments. Also, you may want to highlight volunteer positions as well as paid positions you have held if relevant to the career path you want to pursue. Most importantly, to really make your resume stand out make sure that it is accompanied by a well-written, specific cover letter that highlights and elaborates on the items in your resume that are relevant to that particular position announcement.

Shugart’s responses provide a useful guide for young trainees considering non-academic career paths. In summary, graduate students and postdocs should develop a resume, seek to differentiate themselves from their peers via relevant activities, seek opportunities in their desired career path, participate in informational interviews, and network with people who are currently in their desired field of work. Finally, they should take full advantage of the career resources that ASCB offers them both at the annual meeting and year-round, as described in this interview.