Behind Every Successful Career is a Mentor 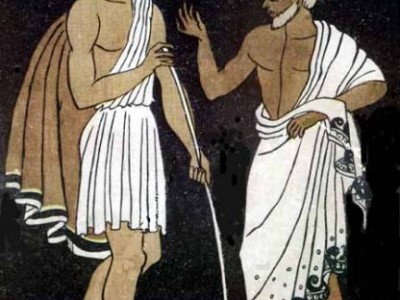 Telemachus and Mentor in the Odyssey

A mentor, an experienced and trusted advisor, is critical to creating a successful career, and most influential people will claim to have had the support of at least one mentor. However, as Hashem points out in a recent COMPASS post, mentorship, even for an academic career, has been lacking in academia until recently.

Not surprisingly then, mentoring for a non-academic career (NAC) has been, so far, scarce. UCSF conducted a survey of its faculty, the results of which were presented in the 2015 Graduate Career Consortium conference by Bill Lindstaedt, Executive Director of the UCSF Career Center. This survey resulted in a spectrum of responses from the faculty on the question of NACs, ranging from: “PhD is for academic training only” to “I train my students and postdocs for a NAC.” It was encouraging to note that the majority of PIs fell somewhere in the middle. They know and acknowledge the fact that less than 15% of PhDs who entered graduate school in 2014 will end up with an academic career. Many are willing to help their trainees transition into a NAC; but most lack the resources and knowledge needed to achieve this.

A radical shift in the mindset of faculty mentors and their mentees is required to move forward and create an environment where a NAC is considered to be a viable and acceptable career opportunity. The burden to change the mentality falls equally on the shoulders of the mentors and mentees. In the following few paragraphs, I will share some of the resources I have found that will help mentors and mentees build and grow a symbiotic relationship and work toward development of fruitful NACs.

Sheryl Sandberg, in her book, Lean In: Women, Work, and the Will to Lead, points out that the worst thing a mentee can do, is to go up to an influential person and ask “Will you be my mentor?” This is off-putting and will surely yield a negative response. A mentor seeks out someone who has shown worth and has met certain expectations set by the mentor. Therefore, to stand out as a worthwhile mentee, you have to build a relationship and perform each task set to you to the best of your ability. A mentor does not need to be your PI; a mentor can be a PhD thesis committee member, someone you have collaborated with or someone whose lab is down the hall with whom you have had discussions over coffee. The National Postdoctoral Association (NPA) encourages having multiple mentors.

It is also important for incipient scientists to know what they want. There are several career options outside academia: this article lists the top 10 for STEM and this one for Humanities. It is imperative that mentees do their homework, keep their Individual Development Plan (IDP) current, and identify their transferable skills as well as ways to leverage them. In a recent article on the Nature Jobs website, Christopher Taylor, Associate Director of the Center for Professional Development Entrepreneurship at the University of Texas MD Anderson Cancer Center, lists a “four-part plan” that will help a scientist launch into a NAC. “Knowing yourself” is the first step. This is followed by “understanding your options,” “identifying gaps,” and “launching a plan.” Following these simple steps will get you started in your pursuit of your dream career. The Brown University career planning department has also created a step-by-step tutorial of ways to jumpstart your way into a NAC.

As Bruce M. Shore writes in his book, The Graduate Advisor Handbook, a student centered approach, advising or mentoring should work as scaffolding. The mentor and the mentee are integral parts of it. While it is important for the mentee to put in the homework, it is also important for them to have realistic expectations of their mentors. In an article written for Chronicle Vitae, career coach Fatimah Williams Castro advises that mentees not ask for permission or approval from their mentors about their NAC choices. Also, they should not reveal their plans to their mentors before they have a clear notion of the path they want to pursue.

For a scaffold to work properly, all the rungs need to be congruent. Therefore, as important as it is for a mentee to be prepared, it is critical for a mentor to live up to being a trusted advisor. The survey of UCSF faculty points to an encouraging trend; more and more PIs are becoming aware that not all of their trainees are going to want to or be able to stay in academia. And some are even open to helping their mentees get training during their graduate and postdoc years to build up a resume that will stand out from the crowd. However, most PIs fall in the category of wanting to help, but not knowing how to do so. This is not necessarily surprising given that much of their training has steered them to an academic career!

There are several ways that PIs can transform themselves into mentors for trainees interested in NACs. First and foremost, as the recent 2015 NPA Garnett-Powers & Associates, Inc. Mentor Award recipient, Jennifer Silk points out in an interview with the POSTDOCket, PIs should be open to having a dialogue with their trainees and listen without judgment. The IDP is an iterative document and changes to it should be made after discussions between the mentor and the mentee. Furthermore, as Williams Castro points out in her article, PIs should know their limits and refer their trainees to knowledgeable career counseling resources.

Recently Doug Kalish, founder of dougsguides, has been organizing a series of workshops aimed at informing academic faculty of resources available to them to help mentor trainees into NACs. He has conducted these workshops at UC Berkeley and UC Santa Barbara and is scheduled to deliver more of them. In his first workshop at UC Berkeley, Kalish was pleased to have a good turnout of faculty members followed by useful discussion of the needs of the faculty members. Kalish advises his workshop participants to use their network to arrange informational interviews for their trainees, to allow their trainees time for professional development, and to provide trainees with opportunities to hone the skill sets they would need to launch their NAC. Also, it is important that PIs treat their trainees who want NACs no differently than they would ones looking to stay within academia.

Change is on the way. There is hope that soon these resources and knowledge will be disseminated uniformly, and more PIs will be mentors dedicated to guiding their trainees toward successful academic and non-academic careers.