The cell biologist’s toolbox grows more powerful with each passing year. As cell scientists collaborate with experts in computer science, chemistry, physics, and engineering, new technologies and new methods of using established technologies are added regularly. What can these advanced technologies tell us about cells and cell processes that we didn’t know before? How will these technologies help cell scientists answer questions in the basic sciences as well as solve problems in human disease?

Wanda Kukulski, a group leader from the Medical Research Council Laboratory of Molecular Biology in the UK specializes in electron cryo-tomography (cryo-ET) and correlated light and electron microscopy (CLEM). Cryo-ET, which images samples vitrified through very quick cooling to extremely cold temperatures, holds value for analyzing the structure of macromolecular assemblies found in cells that are “too large or too irregular” to be analyzed with cryo-electron microscopy (cryo-EM), which looks at single particles.

“Samples can be obtained by biochemical reconstitution or purification of cellular components such as coated vesicles, virus particles, or flagella,” Kukulski said. “In fact, recently some people even use cryo-ET on single particle samples on which they plan cryo-EM data acquisition, in order to learn more about how their particles are distributed within the vitreous ice.” Importantly, Cryo-ET can image macromolecular assemblies and cellular architecture directly inside cells, she noted. One can obtain cryo-ET images of intact cells that are adhered to EM grids and “vitrified” by plunge-freezing them in liquid ethane, she said.

However, cryo-ET works best on cell areas thinner than 500 nanometers because there is inelastic scattering of electrons as they pass through a specimen. “Those electrons contribute noise to the image. As a result, when the sample is too thick, there are not enough elastically scattered electrons left to generate an image,” Kukulski said.

To reduce the thickness of samples and thus the noise, Kukulski said, researchers use a method called vitreous sectioning, which employs a diamond knife to cut pelleted cells or bits of tissue that are vitrified by high-pressure freezing. Another method involves cryo focused ion beam milling (cryo-FIB), in which cells are vitrified with ethane and milled into hair-thin sections with the ion beam of a scanning electron microscope.

“We can use CLEM to find very rare structures or events within the cell or cell populations….”

“Both these thinning methods have their advantages and limitations,” Kukulski said. “The structural preservation by cryo-FIB milling is better than by vitreous sectioning; therefore this method, which is also the most recent of all, is considered the gold standard for structural analysis of macromolecular complexes in situ. On the other hand, cryo-FIB milling of multicellular samples is quite complicated, although possible, while tissue samples can be processed by vitreous sectioning rather well.” The ion beam removes cellular material until only a thin layer, similar to a section through the cell, is left, and the sample is then transferred into a transmission electron microscope for cryo-ET.

Another powerful imaging method gaining ground is CLEM. Useful for collecting data about fleeting events or transient structures in cells, this method can be used on frozen or room temperature samples and relies on the use of fluorescent labels.

“We can use CLEM to find very rare structures or events within the cell or cell populations; for example a pathogen that only enters a few cells, or a very transient process such as the moment when a membrane undergoes fission of a vesicle,” Kukulski said. “We can also unambiguously identify structures or events through fluorescently labeled marker proteins. For example, differently coated vesicles can be difficult to discern in the electron microscope if one doesn’t have any label to mark their identity.” She adds that one of her favorite but less obvious advantages of CLEM “is that it allows you to identify the absence of formation of a particular structure at the location of the label.”

Kukulski says CLEM is so versatile, “there is no single solution that applies to all questions and thus no universally satisfying answer to how limited it is. The fluorescent signal can, for instance, provide information about the state of the cell to be imaged by cellular ET: whether it is transfected, or whether it is going through the process it is expected to go [through]. The fluorescence can also add positional information about cellular components that are labeled fluorescently, to localize them inside the cellular electron tomogram,” she explained.

With regard to fluorescent probes, more advanced fluorophores and fluorescent sensors are being developed all the time for biological imaging. The markers help allow high-throughput analysis when combined with new microscopes and sophisticated software analysis tools.

Luke Lavis, senior group leader and head of molecular tools and imaging at the Howard Hughes Medical Institute’s Janelia Research Campus, said that progress is being made on many different types of new probes including fluorescent proteins, dyes, and sensors for cellular imaging and near-infrared and shortwave-infrared dyes for imaging whole animals.

“[B]iologists are using these new fluorophores to look at individual molecules as they move around the cell….”

“These dyes are enabling new imaging experiments in a variety of biological systems. In particular, biologists are using these new fluorophores to look at individual molecules as they move around the cell, especially to probe how the behavior of transcription factor low-complexity domains controls gene expression.”

The key to designing an effective fluorophore, Lavis explained, is to “improve both the brightness of the fluorophore, which is the product of the absorptivity and the efficiency of the fluorescence process, and the photostability, which is how long the dye lasts before undergoing an irreversible reaction to a nonfluorescent form.”

“We can use physical organic chemistry principles and computational chemistry experiments to try and improve brightness. We can also use experiments to determine the various photobleaching pathways and then design new derivatives to prevent these unwanted reactions,” he said.

These new markers are enhancing the ability for researchers to track single particles, which “allows real-time kinetic measurement of the movement of molecules inside cells, allowing biochemistry-type experiments but in a cellular context,” said Lavis. “More generally, many of the new fluorescence microscopy technologies are more photon-intensive and thus require brighter, more photostable dyes. Steady improvements on this front will allow cell biologists the ability to extract more photons—and thus more information—from an imaging session.”

Kukulski and Lavis are among the organizers of three scientific workshops at the 2018 ASCB|EMBO meeting this December in San Diego, CA. 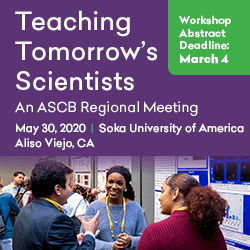