Team Cell Biology Is the Future Says ASCB, But Managing Will Be NIH Challenge 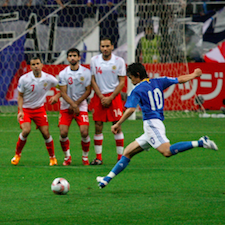 The World Cup of 21st century science will be won by “cell biology teams,” combining disciplines and led by cell biologists who can “think across the spectrum of science,” says a new ASCB letter to NIGMS. Photo by Neier.

It’s not a new Olympic sport yet, but forming and funding 21st century “cell biology teams” is on the minds of both the NIH National Institute of General Medical Sciences (NIGMS) and the ASCB. In a new letter to Cathy Lewis, who heads the NIGMS division that oversees cell biology and biophysics, ASCB Public Policy Committee chair Connie Lee and ASCB Executive Director Erika Shugart endorsed the funding of truly interdisciplinary teams to tackle the big questions facing 21st century cell biology but called on NIGMS to come up with imaginative thinking and a new review process to ensure that “team projects” don’t end up being just “four or more R01 grants tied together.”

Commenting on behalf of ASCB on a new NIGMS initiative on team science, Lee and Shugart wrote, “The complexity and scale of scientific research has expanded tremendously in the past 15 years and thus requires cross-disciplinary approaches that engage team members with expertise in different fields to work together.” These “cell biology teams” could include mathematicians, computer scientists, chemists, physicists, and social and behavioral researchers as well as “bench cell biologists,” they say, but funding, managing, and assessing the value of their research will be challenging.

To evaluate truly creative, multidisciplinary proposals, Lee and Shugart suggested a two-tiered approach to funding, an earlier short-term “seed” grant for proof-of-concept work followed by an intensive review for longer-term funding. Lee and Shugart also pointed to the need for new management and advisory structures to oversee team projects and changes in graduate and postgraduate training that will give trainees experience in thinking “across the spectrum of science.” The future demands that kind of thinking, wrote Lee and Shugart. “Many of the most pressing problems facing humanity are biological at their core: health, food, energy, the environment. We need a new generation of biologists, trained broadly, with interdisciplinary talents.”