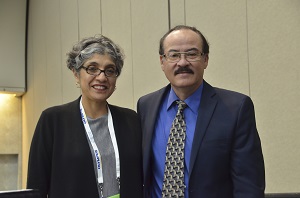 The ASCB Minorities Affairs Committee (MAC) has the goal of providing professional development training and opportunities for underrepresented minority scientists as well as increasing their involvement in all aspects of the Society. To that end, the MAC has programming at the Annual Meeting and throughout the year.

At the 2015 Annual Meeting the MAC organized several events. The annual Mentoring Keynote lecture was presented by JoAnn Trejo, associate dean and professor at the University of California, San Diego. Trejo chronicled her journey of coming from a poor migrant farmworker family to obtaining her current position and the challenges she faced along the way. She described how mentors over the years have contributed to her persistence in science and her current success.

Also at the Annual Meeting, the MAC and the Education Committee jointly hosted the Poster Competition for undergraduates and MAC travel awardees. Presenters at the undergraduate, graduate, and postdoctoral level were recognized with awards. New this year, the MAC also worked jointly with iBiology and the Committee for Postdocs and Students to organize a popular communications workshop.

The 22nd Annual E.E. Just Lecture was given by Erich Jarvis, associate professor at Duke University Medical Center and Howard Hughes Medical Institute investigator, and was one of the highlights of the MAC programs at the Annual Meeting. His talk, “Dissecting the Molecular Mechanisms of Vocal Learning and Spoken Language: A Personal Journey,” was a presentation of his research and personal life story. His talk was very engaging. He described the neurological networks involved in the ability of some birds to mimic sounds, and he included crowd-pleasing videos of birds talking and dancing. 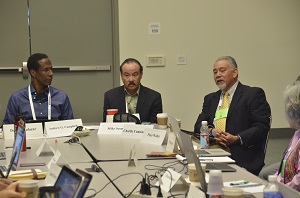 MAC Co-chairs Andrew G. Campbell and Renato Aguilera with Mike Sesma of the National Institute of General Medical Sciences at the MAC meeting

The MAC runs a National Science Foundation–sponsored program called the Faculty Research and Education Development Program (FRED) to promote grant funding success of junior faculty. Junior faculty members pair up with a senior faculty to receive mentoring over the course of a year, beginning with a three-day workshop in July. At the Annual Meeting the junior faculty, their mentors, and MAC members gathered for a mock grant peer-review session. Junior faculty received candid feedback on their draft grant proposals and experienced first-hand how grant proposals are reviewed, helping them to strengthen their proposals prior to submission to a funding agency.

The MAC will continue the FRED program in 2016. Applications for a new cohort will open early in the year with a deadline of March 18, 2016. More information is available at http://bit.ly/1OpD2co. We will also be holding the 11th Annual Junior Faculty and Postdoctoral Fellows Career Development Workshop this summer.

The MAC is starting off the year with a new co-chair, Franklin Carrero-Martínez, who joins continuing co-chair Andrew G. Campbell. The Committee is engaged in grant writing and fundraising activities to continue existing programs and to implement new programs that help sustain its efforts of increasing the involvement of minority scientists in ASCB and providing career development training. We thank the current members of the MAC and those who completed their terms in 2015. We especially thank outgoing MAC co-chair Renato Aguilera for his leadership and service to the Committee. We are excited about the new year and look forward to serving the ASCB community with our programs.