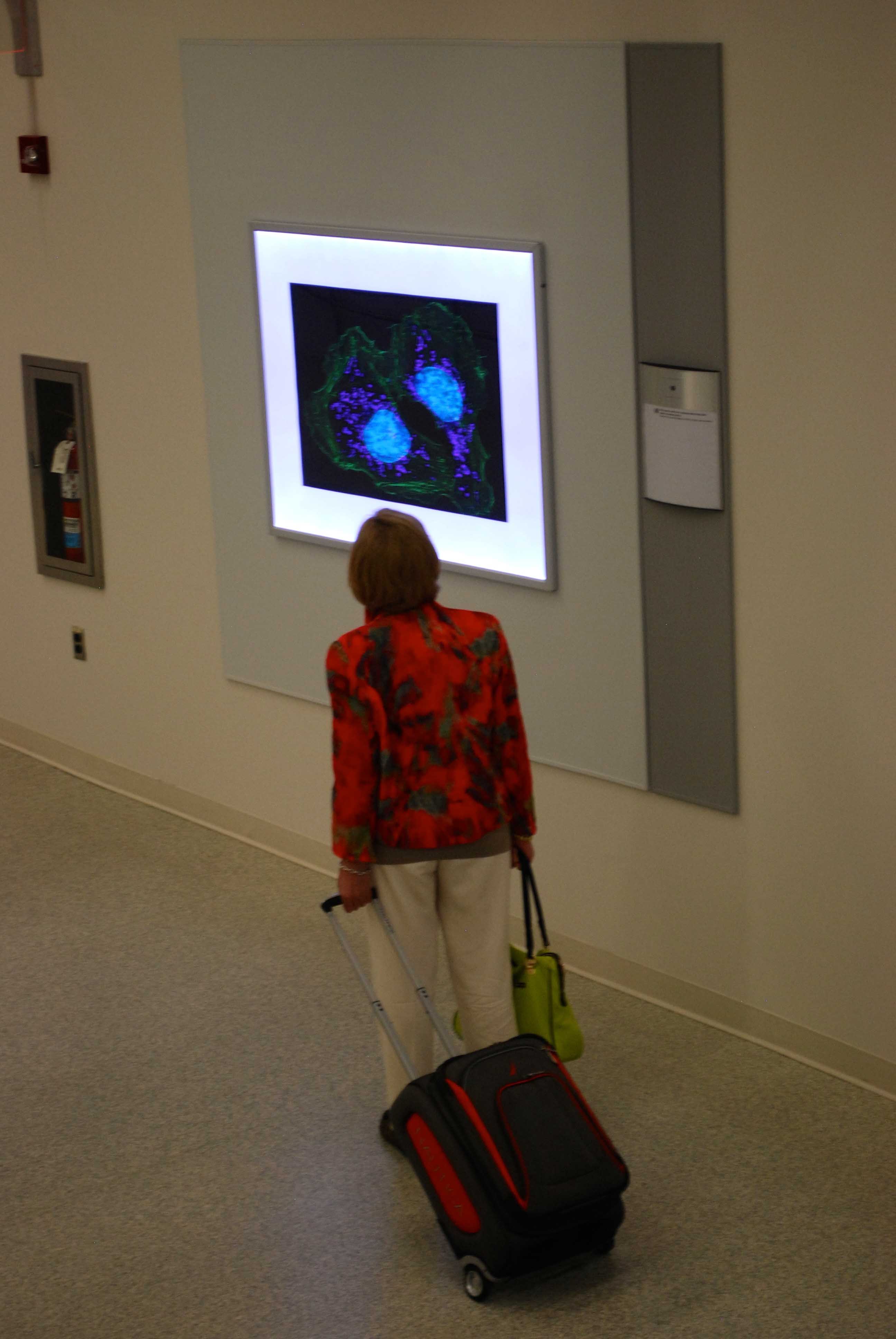 Fly-by cell biology: a passenger at Dulles Airport
pauses to look at ASCB’s “Life:Magnified”
exhibit which opened this week in Terminal C
and online. ASCB photoRoll-aboard suitcase in tow, the passenger in the red chinoiserie jacket was coming up the ramp to Terminal C in Dulles International Airport at a determined rate when her eye was caught by a blaze of color on the wall. She stopped to study the image glowing on the wall-mounted light box. Then she read the label. It was an enormous blow-up of mouse cancer cells with actin labeled in green to show the cell-cell adhesion points. And it was strangely beautiful. The passenger continued slowly up the ramp, examining each of the 46 giant images displayed on the light boxes, from Ebola virus to gecko lizard toe hairs to mitotic chromosomes. This airline passenger was one of the 1.25 million expected to pass through the Gateway Gallery at Dulles over the next six months where Life: Magnified, a collaborative project of the ASCB and the National Institute of General Medical Sciences (NIGMS) of the National Institutes of Health (NIH) opened with some fanfare yesterday. Life:Magnified was made possible by the Metropolitan Washington Airports Authority with funding support from the Carl Zeiss Company.

The Life: Magnified display is inside the TSA security perimeter so without boarding passes, all the VIPs, staffers, and press had to be escorted by Airports Authority personnel. It was a full hands-up, shoes-off TSA screening and then a ride on the crowded Dulles shuttle train to Terminal C where the Life: Magnified party tried to stay to one side as time-challenged passengers raced by, desperate to catch their planes. For them, cell biology was blur.

For the ASCB and NIGMS organizers of Life: Magnified, the results were spectacular. After the Airports Authority gave the okay, they rounded up more than 600 submissions, winnowed that down to 46, and then transferred the winners as immense high-resolution image files (one file was 10,000 pixels on a side) to a photo processing house to be made into large poster-sized transparencies. Then came permissions, credits, captions, and the building of a Life: Magnified site through NIGMS. The lion’s share of the work was done by Alisa Machalek of the Science Writing, Editing and Education office at NIGMS and Thea Clarke, Director of Communications and Education for ASCB.

Collins was particularly taken by the back-lit transparencies. “I had seen the pictures printed out on paper and they were impressive enough in that fashion,” he said. “But when you walk down the concourse and see them displayed so artfully back lit, it was almost like seeing some of them in three dimensions.”

The juxtaposition of eye-popping scientific images and airplane-bound travelers was on the mind of ASCB’s Bertuzzi after the group trooped back through TSA to a conference room for questions and remarks. “So what are great art and great science doing out here at an airport?” Bertuzzi asked. “For the passengers who will stream by Life: Magnified in the coming months, this will be, at best, a pleasant interlude. But the ASCB and our partners have brought this exhibit out here for a very serious purpose.” Science, he said, suffers from a public image problem that is in some ways self-inflicted. An excess of jargon and stodgy science instruction in the schools leaves many Americans with the idea that scientists live by themselves on another planet. But said, Bertuzzi, “To counter that dangerous perception and to draw the public into our science, cell biology has a secret weapon—the beauty of the cell.” The Dulles images would exploit that secret weapon.

By chance, Bertuzzi’s schedule last week brought him home through Dulles on the day the installers were putting up Life: Magnified.” Bertuzzi noticed that when he stopped to examine an image, others slowed down to see what he was gawking at. Bertuzzi urged scientists to fly through Dulles in the next six months and to create small “gaper’s blocks” in the Life: Magnified exhibit. “You could help improve public education about the wonders—and the importance— of bioscience,” Bertuzzi declared.

For Lorsch, Life: Magnified was a rare opportunity to put art and science in a place where the public can see it, using the sheer beauty of the images to stop travelers in their tracks. “We especially hope to captivate the minds of young travelers,” said Lorsch. “A child walking through the airport this afternoon may be the person who in the future discovers the cure for some terrible disease.” 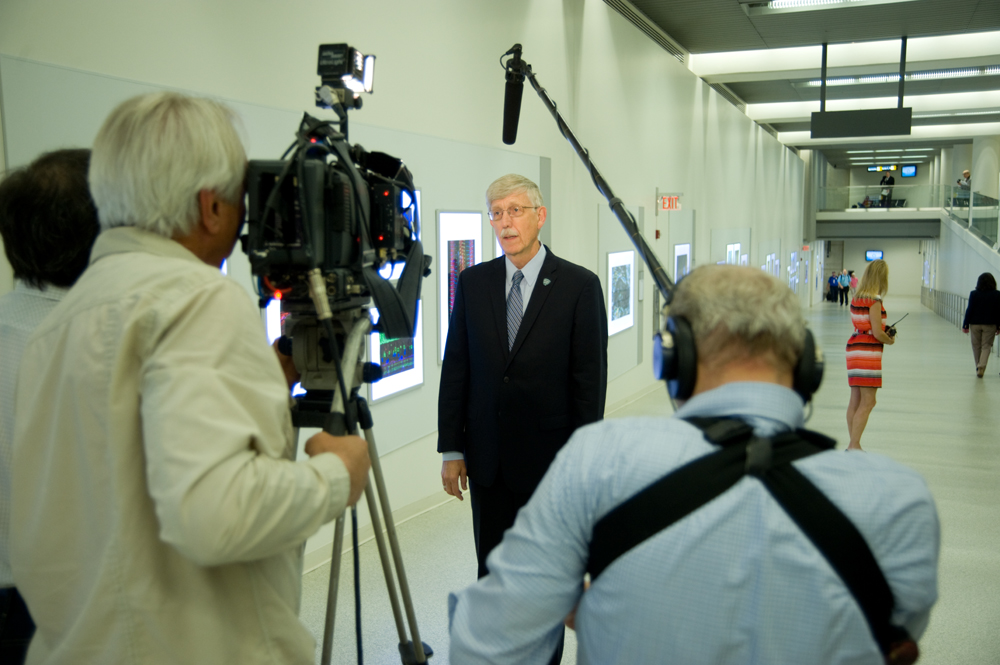 NIH Director Francis Collins answering questions at opening of
“Life: Magnified” in Terminal C at Dulles Airport.
ASCB photo by Charles VotawWhile serving as ASCB President this year, Lippincott-Schwartz’s day job is at the NIH Eunice Kennedy Shriver National Institute of Child Health and Human Development where her lab is a pioneer in the use of super-high resolution and live cell imaging to analyze the dynamic interactions of molecules in cells. She is working in an amazing era, Lippincott-Schwartz reported. “I can say that there has never been a more exciting time in microscopic imaging than the present.” But the microscopic world we take for granted is a relatively recent discovery in human history, she said. “This microscopic world has been carrying on around us for hundreds of millions of years and yet it was completely invisible to humans until the 17th century,” she said. That’s when the English microscopist Robert Hooke gave us the word cell. “Our microscopic vision grew sharper and sharper until in the mid-20th century, when the powers of imaging technology exploded. In the hands of cell biologists like Keith Porter and George Palade, electron microscopy revealed another invisible world—the inner structure of the cell,” said Lippincott-Schwartz. Making what was invisible visible to the wider world is what this exhibit was all about.

Collins picked up on the reference to Hooke, quoting from his first account of viewing well water. “By this means I examined the water… as if I had been looking upon a Sea, I saw infinite of small living Creatures swimming up and down in it, a thing indeed very wonderful to behold.” Science is an amazing adventure for researchers, said Collins. “It helps us too to stop for a moment and recognize just how awesome it is to be part of this experience.” And how far we’ve come, Collins added. “Imagine if Robert Hooke could see these.” 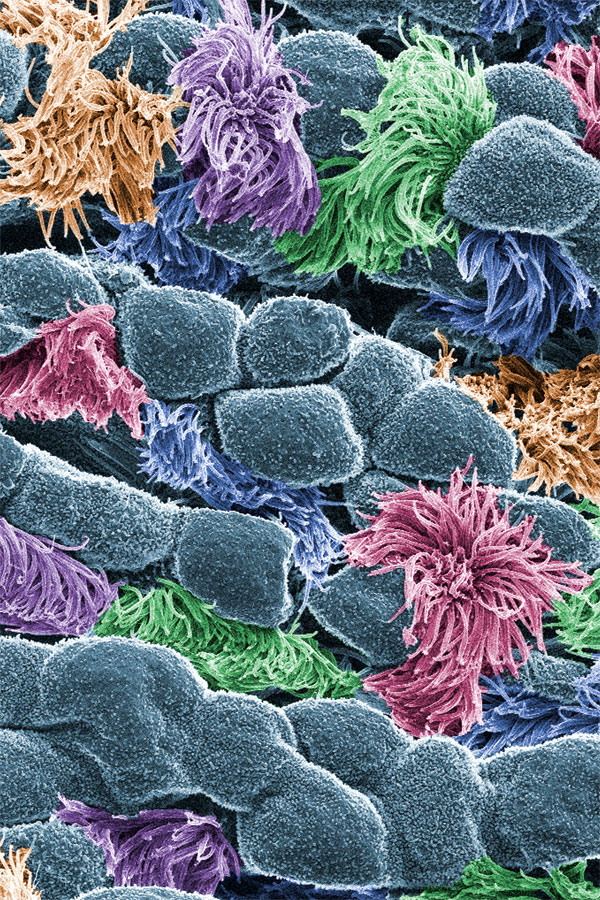 Collins said the 1.25 million people who will walk through Life: Magnified in the next six months should be taken as “a great encouragement” by those who do bioscience. Here is our chance to put both the scientific importance and the sheer beauty of what we do before people, giving them a chance to glimpse things they haven’t seen before. “These are images of beauty that offer glimpses into an unseen world,” said Collins.

Life: Magnified will run through November at Washington Dulles International Airport. The Gateway Gallery inside the TSA secure zone is accessible to all Dulles passengers with the time to take the shuttle train to Terminal C train and walk up the ramp. But all the ASCB and NIH-NIGMS Life: Magnified images are also accessible through the NIGMS site. All are freely available for downloading in high-res versions for educational, news media, or research purposes provided that the source for each is credited.