Council members gathered on December 7, 2018, in San Diego prior to the start of the 2018 ASCB|EMBO Meeting. The Society’s governance structure, the future of peer-reviewed publishing, and new programming for annual meetings were among the topics that generated lively discussion. The Council also thanked 2018 Society president Jodi Nunnari for her service and welcomed incoming President Andrew Murray and President-Elect Eva Nogales.

Over the next few months, the Council will be working with Michael Gallery of OPIS Consulting to examine the effectiveness of the Society’s governance structure. A Governance Task Force developed a list of 16 performance requirements to be evaluated. Performance requirements describe an ideal approach to how the Society should be governed. The Council tweaked and then approved those requirements. Some of these requirements state that the structure of the Society enable inclusiveness and broad participation, that the Council members reflect the diversity of the membership, that the decision-making process be transparent and systematic, that Council members be actively engaged and accountable, and that the budget be aligned with the strategic plan, among several others. The Governance Task Force will then work with Gallery to compare the Society’s current structure with what it should be based on the approved performance requirements. Gaps in performance will be identified and solutions suggested, which will be submitted to the Council the next time it meets.

Lead by ASCB’s Director of Publications, Mark Leader, the Council considered the future of peer-reviewed publishing in light of the “Plan S” initiative recently posited by the organization Science Europe, the European Research Council, the European Commission, and funders. Under Plan S, by the year 2020 researchers who receive public funding may have to publish in journals that provide immediate open access. While many Councilors recognized that such a move would increase the flow of scientific data and enhance collaboration across disciplines and borders, it certainly impacts the subscription model of many journals, including ASCB’s own Molecular Biology of the Cell (MBoC). Furthermore, the current editor-in-chief of MBoC, David Drubin, will be stepping down at the end of 2019, so the Council noted that it would need to find a new leader for the journal who would be able to face the challenges of the rapidly changing landscape of scientific publishing.

Council approved the scientific program for the 2019 ASCB|EMBO meeting, which will take place in Washington, DC, December 7–11, 2019. The program was developed by Elly Tanaka, senior scientist at the Research Institute of Molecular Pathology in Vienna, Austria, and Sue Jaspersen, associate professor of Molecular and Integrative Physiology at the University of Kansas School of Medicine. In addition to the scientific program, the Council brainstormed seven possible scientific threads (or tracks) that will run through the Annual Meeting programming beginning with the 2020 meeting and for three years after that. The threads will be aimed to encompass the many facets of cell biology and to recognize how they are interconnected.

The Council heard reports from the various committees. Among the highlights was a presentation by Brian Thiel, ASCB’s new Director of Membership, who described the structure of online communities for members, set to launch sometime in the second quarter of 2019. The ASCB members-only online communities will serve as a platform for networking, support, and relationship building among participants. Also, ASCB’s “Improving Diversity and Career Transitions through Society Support” IPERT grant from the National Institutes of Health was funded in the fall of 2018 for three million dollars over five years, and Minorities Affairs Committee (MAC) co-chairs Franklin Carrero-Martinez and Verónica Segarra reported that the committee has begun organizing and implementing how those funds will be used. MAC also discussed the outcomes of its Career and Diversity Member Survey. MAC and the Education Committee will be working together on a project, as outlined in the “Declaration of Effective and Inclusive Education,” which was approved by the Council.

With the exception of members of the Nominating Committee, who serve one-year terms, the other committee members will serve three-year terms beginning in 2019. 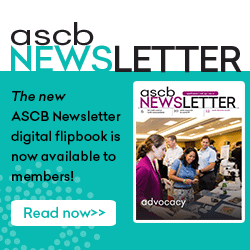