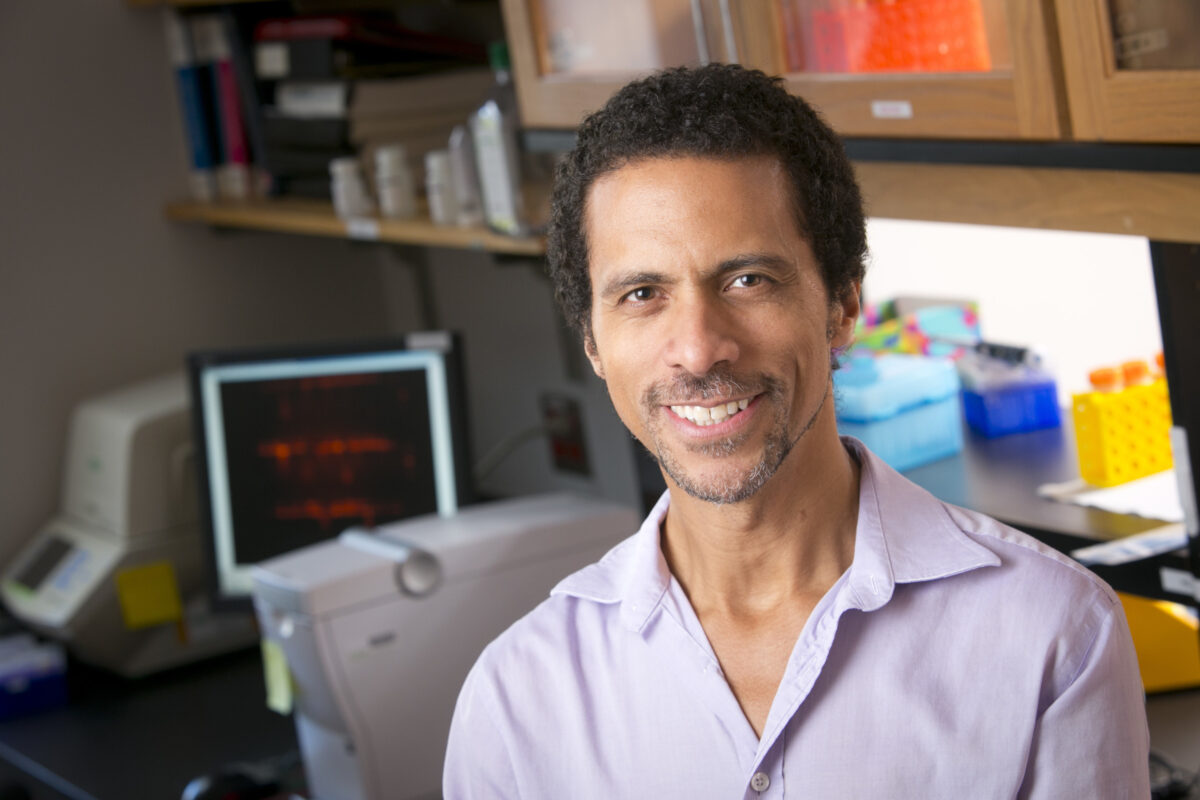 The ASCB Minorities Affairs Committee has selected Erich D. Jarvis to receive the 2015 E. E. Just Award. Jarvis is a neurobiologist who investigates vocal learning in birds as a model with which to study how the brain generates, perceives, and learns complex behavior such as spoken language. He is currently an associate professor in the Department of Neurobiology at Duke University Medical Center and is also an investigator of the Howard Hughes Medical Institute (HHMI), a position he has held since 2008.

David Asai, Director of the Undergraduate Science Education Program at HHMI, says that “a hallmark of Jarvis’ science is how he continues to push the boundaries of understanding, employing new tools when they become available to dig deeper and more comprehensively.” For example, Jarvis recently made news for co-leading the Avian Phylogenomics Project, which established the most well-resolved bird family tree ever assembled and discovered convergent molecular changes in song-learning areas of bird brains and speech regions of human brains. Altogether, the consortium has published over 36 papers.

Jarvis has been an excellent mentor to many undergraduate and graduate students and postdocs in his own laboratory. As a graduate student and postdoc himself he did outreach, training inner city high school students in research. As an HHMI investigator, he regularly hosts undergraduates in his lab for a 10-week summer research experience through the HHMI Exceptional Research Opportunities Program for talented students from groups underrepresented in science. Students who have worked with Jarvis have praised his mentorship. He has talked about his inspiring scientific journey in several venues, including a feature in Science Careers (http://bit.ly/1DUKrzb) and an iBiology “How I became a scientist” seminar (http://bit.ly/1DbZd0f), sharing how his family values, background, and identity as a minority scientist have influenced his career.

Jarvis has received many awards and honors for his scientific contributions. For his work using a molecular approach to map brain areas involved in behavior, he received the National Science Foundation (NSF) Alan T. Waterman Award, which is NSF’s highest award for young investigators. The award is given annually to one scientist or engineer under the age of 35 who made a scientific discovery/impact in science. He has also received the National Institute of Health Director’s Pioneer Award.

Jarvis grew up in Harlem in New York City under difficult circumstances. His family was mid- to low-economic class and his parents were divorced. His father suffered from mental illness that culminated in drug addiction and homelessness and ended tragically in an apparently random murder. His family was very involved in the performing arts and it seemed that Jarvis was heading in that direction as well. He was a student at New York City’s High School of Performing Arts, where he was a dance major. He was also awarded scholarships to the Geoffrey Ballet and Alvin Ailey Dance Schools. He was invited to audition for the Alvin Ailey American Dance theater company before deciding to attend college and study science. His mother had advised him to do something that has a positive impact on society, and Jarvis thought he could better fulfill that ambition as a scientist. He attended Hunter College in New York City where he earned degrees in mathematics and biology. Because of his sudden transition to science he had to take remedial classes at Hunter to make up for his earlier focus on dance. He chose to major in both mathematics and biology because of his interest in the origins of the universe and how the brain works. Eventually his interest in how the brain works won out. He completed his graduate and postdoctoral work at The Rockefeller University in New York City where he began studying vocal learning in birds.

Jarvis’ career as a scientist was really cemented as an undergraduate when he had the opportunity to do laboratory research through the National Institute of General Medical Sciences Minority Biomedical Research Support and Minority Access to Research Careers programs, which help encourage underrepresented minorities to get involved in research. He worked very passionately in the laboratory of Rivka Rudner at Hunter College and fell in love with scientific research just as he had fallen in love with dance. In fact, he has noted several similarities between his dance and research careers. Both require discipline, hard work, acceptance of failure, and creativity. His years of dedication to dance have prepared him well for his scientific career. And coming full circle, Jarvis’ and other’s research has discovered that the brain pathways that control vocal learning abilities are embedded in the same brain areas that control motor sequence behavior such as learning to dance. Therefore, the brain circuits for dance and vocal learning are related, linking together Jarvis’ passions for dance and science. Jarvis will present the 22nd annual E.E. Just Lecture on December 13, 2015, at the ASCB Annual Meeting in San Diego.