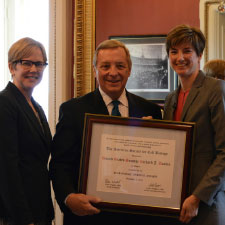 of ASCB’s Public Policy Committee, and Erika Shugart, the Executive Director of the ASCB, for his unwavering support for the federal investment in biomedical research.

Presenting the award in Durbin’s Capitol Hill office, Lee praised Durbin for his active leadership in Congress—leadership that has been crucial in addressing the decades-long downward trend in funding for scientific and biomedical research. Durbin’s response to the funding crisis was the American Cures Act The American Cures Act established a mandatory trust fund dedicated to steady growth in research funding for the National

Institutes of Health (NIH), the Centers for Disease Control, the Defense Health Project, and the Medical and Prosthetics Research Program of the Department of Veterans Affairs. Lee said that Durbin has been a leader in promoting organ and tissue donation and had successfully fought to increase the share of federal funding to combat AIDS worldwide. He was also behind the American Innovation Act, which increased funding for scientific technology research by five federal agencies.
Lee declared, “Because you challenged your colleagues, for the first time in a decade the NIH saw a substantial increase in its annual appropriations and more young investigators are seeing opportunities where no clear path existed for them during the past 10 years.” Lee credited Durbin’s leadership in creating more opportunities for scientists studying the underpinnings of life itself. “Researchers are better equipped to take advantage of unprecedented scientific opportunities that may lead to new treatments and cures for our nation’s most devastating illnesses,” Lee concluded.

According to Shugart, Senator Durbin is the third U.S. Senator to receive the ASCB’s Public Service Award, following Tom Harkin (D-IA) in 1994 and the late Arlen Specter (R-PA) in 2005. Other ASCB Public Service Award recipients include Nobel laureates J. Michael Bishop in 1998, Harold Varmus in 1999, Paul Berg in 2003, and Elizabeth Blackburn in 2004 as well as actor and activist Christopher Reeve in 2001.

Thanking the ASCB, Durbin said it was an honor to be included in the same lineage as Senators Harkin and Specter. Durbin told Shugart and Lee that the award reflected a major decision in his life. Uncertain whether or not to run for reelection in 2014, Durbin told himself that he would run only if he had specific goals. Reviving federal support for biomedical research was the top goal on his list, and the ASCB award meant that he’d chosen well.
Durbin has been in the U.S. Senate since 1997 and sits on the Senate Judiciary, Appropriations, and Rules Committees. He has served as the Assistant Democratic Leader since 2005.

Lee reminded Durbin of his remark following President Obama’s State of the Union address that it was music to his ears to hear the President talk about medical research and the difference it can make in the United States and in the world. “Well, it is music to our ears every time you stand in support of medical research,” Lee told the Senator.