The Tom Pollard Show on iBiology: How to Get off the Sidelines and into Science Advocacy and Why You Should 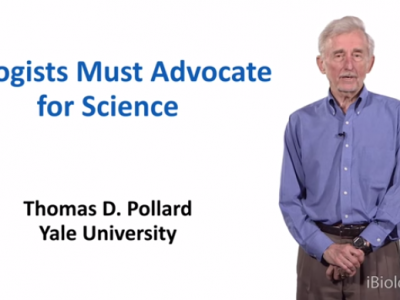 Tom Pollard’s new video on iBiology explains the science advocacy game and why bench scientists need to get off the sidelines. Image: Courtesy of iBiology

If you’re a biologist, you could know Tom Pollard from many places. Maybe as an undergrad you had the textbook by Pollard and Earnshaw. Maybe if you were in a cell motility lab you know the name from key citations, especially around the discovery of the Arp2/3 complex, the essential piece of the actin cytoskeleton that allows cells to move, so that neurons can wire up or the immune system can track down invaders. Maybe your mentor or your mentor’s mentor is a product of the Pollard lab, which has been at Johns Hopkins, the Salk Institute, and since 2001 at Yale. But the Tom Pollard Show just posted on iBiology highlights another side of his career—as a tireless advocate for science advocacy in general and basic biological research in particular.

In his new iBiology video, Pollard explains that nearly all bioscience funding in the United States flows from two federal agencies, the National Institutes of Health (NIH) and the National Science Foundation (NSF). The President and Congress control that flow, but basic bioscience has to compete for its share against an army of organized interests advancing their own priorities. Basic bioscience is “a virtuous cause with articulate advocates,” says Pollard, but the vast majority of research scientists never budge from the sidelines. The Tom Pollard Show on iBiology.org aims to get you off the sidelines and onto the science advocacy playing field.

Once you’re on that field, you’ll need coaching. Follow Pollard’s lead. He had a hand in building one of the foremost forces in bioscience advocacy, ASCB’s Public Policy Committee. Did we mention that Pollard was Chair of ASCB’s Public Policy Committee from 2007–2010, President of ASCB in 1988, and winner of ASCB’s highest scientific honor, the E.B. Wilson Medal in 2004.

Now led by Connie Lee of the University of Chicago, the Public Policy Committee has just unveiled its new online Advocacy Toolbox, a how-to guide for start-up science advocacy groups. It covers everything from getting organized to getting members and from getting noticed to getting in to lobby the key people.

Science advocacy tip of the week: On the new iBiology video, Pollard makes the suggestion (via Larry Goldstein at UC, San Diego) that if you’ve just won an NIH or NSF grant, make sure to personally thank your congressional rep and both senators. Tell them about the federal money that’s coming to put more scientists to work in their constituency. They love that kind of news. If you’ve just lost an NIH or NSF grant, tell them that too. Tell them how many jobs, how much spending, and how much biomedical progress just went down the drain in their constituency. They hate that kind of news.