The Disappearing Task Force and the High-Tech Workers Immigration Bill 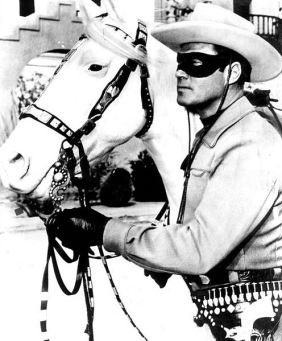 A member of the House secret
task force on immigration reform?
No, it’s actor Clayton Moore and
his horse, Silver, long, long ago.The inhabitants inside the Washington Beltway love secrets. They love knowing them, they love keeping them, they love letting people know they know them, and they love reading them after someone else has leaked them to a reporter. One Beltway resident recalls a neighbor’s garden party where a fellow guest announced that she would have to kill her listener if she were to reveal where she worked. “I’m still not sure if she was serious or not,” the party goer recalls somewhat nervously.

Given Inner Washington’s passion for secrets, it is curious that the House of Representatives’ secret task force on immigration reform has apparently disappeared without a trace.

While a bipartisan group of Senators labored all spring to craft and then coax through the Senate a major immigration bill, leadership in the House of Representatives deflected questions about what they were doing on the issue by touting a secret taskforce of unnamed members working with unspecified goals. Mysteriously, all reference to this secret House group disappeared once the Senate passed its bill and pressure increased on the House to take its own action.

The political consequences of immigration reform for House members are totally opposite from those affecting Senate members. Senators serve six-year terms and represent the diverse electorate of an entire state. House members face a more local and more homogeneous electorate every two years.

These political realities play a major role in the legislative approach each chamber of Congress is taking toward immigration reform. With the secret task force missing in action, the House has decided to draft five different bills, each one addressing a major component of the immigration debate. The five bills will thus address border security; state and local immigration enforcement; employment verification; guest workers for agriculture; and finally, high-tech worker visas. The Senate has already passed one bill that covers all five issues.

Still, the high-tech worker bill passed by the House Judiciary Committee addresses critical visa issues that are important to the scientific community. Most importantly, this bill includes “biological and biomedical sciences” in the definition of those STEM careers that qualify for coverage under the bill. The bill also more than doubles the limits on the number of H-1B visas beginning in 2014. Both issues were among the changes called for by the ASCB in a position paper it released in May.

The earliest the House will debate any of the five immigration bills will be in September. Meantime, members of the secret House immigration task force can rest assured that their secret is safe.