On a Cold Day in February Unexpected Warmth, Not Heat, Greets NIH Leaders on the Hill 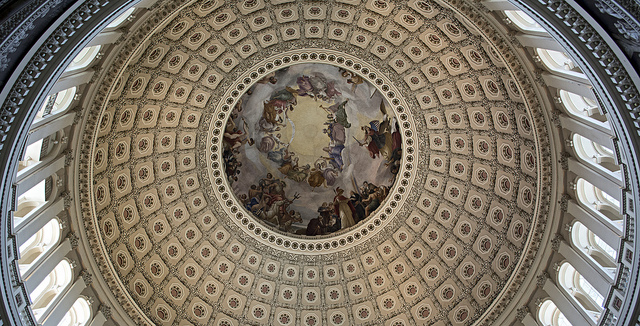 Under the Capitol dome, all that rises is not just hot air. Photo by Alvin Robinson, Flickr Creative Commons

I was on Capitol Hill Tuesday morning for a congressional hearing on the fiscal year (FY) 2016 NIH budget. I go there a lot, but Tuesday was just one of those days on the Hill when the air was charged with excitement. To begin with, Congress was in session and that meant Members of Congress and staffers were rushing from room to room, attending Committee hearings before charging off to the Capitol for roll call votes.

March also marks the start of the unofficial constituent spring “fly-in” period, when citizens from all over the United States exercise their constitutionally guaranteed right to “petition the Government for a redress of grievances.” This right, enshrined in the First Amendment to the U.S. Constitution, has taken on new meaning in modern times. Today, Americans from all over the nation come to Washington as members of the wide number of special interest groups that exist in Washington. Tuesday, it was the veterans’ turn on the Hill.

There is nothing better than a Secret Service motorcade, with the accompanying bomb-sniffing dogs and armed-to-the-teeth police, to amp up the excitement in the halls of Congress. Tuesday’s motorcade was not just any motorcade. Tuesday Israel’s Prime Minister Benjamin Netanyahu was on the Hill to speak to a joint session of Congress.

After spending both dull days and exciting days on the Hill, I was reminded that, for this kind of excitement, the Capitol of the United States of America is a place like no other.

Congressional hearings rarely produce immediate results but on Tuesday there was one important thing to notice at Labor-H Approps—a decided change in tone. Led by the new chair, Tuesday’s hearing was afloat in collegiality between Republicans and Democrats on the Committee and with genuine respect for the work of the NIH and its investigators. In his opening remarks, Rep. Cole described a recent tour of the NIH that he had made with five other members of the Committee. Cole said that it led to a “deeper appreciation” for the work of the NIH. Rep. Steve Womack (R-AR), who was also on the tour, told Collins that he was “in awe” of the NIH. “I am grateful for the NIH,” Womack continued.

As a veteran of the 1998 impeachment of President Clinton, as well as the 1995, 1996, and 2013 federal shutdowns, when civility, let alone gratitude, was in short supply on the Hill, it brought a slight smile to my face. Kind words and collegiality don’t pay postdocs or buy reagents, although they might signal a willingness to invest in more research funding. On a cold day in February, that thought kept me warm on my way home past the police lines and bomb dogs to the Metro.