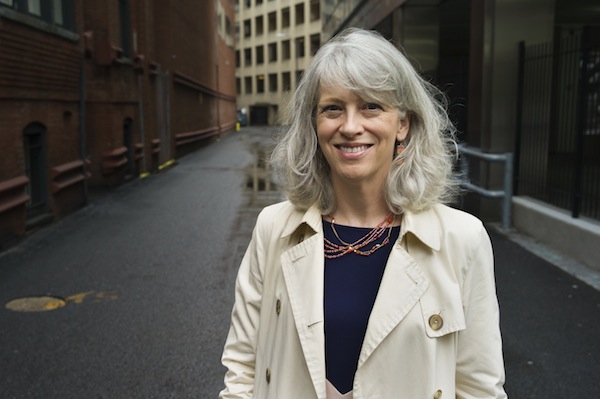 In Philadelphia this December, Ann Reid’s mission will be to talk to scientists about talking about the science of evolution without losing their scientific cool. “It’s not about the science,” says Reid, the new Executive Director of the National Center for Science Education (NCSE), “or at least you have to get a lot of stuff out of the way before you talk about the science.”

It’s a tough message for scientists to hear, says Reid. “Because we are scientists, we tend to think that it’s all about the data. If somebody disagrees with us, we think that if we can just sit them down and teach them some science, they’ll agree with us.” The problem, says Reid, is that this doesn’t work, not with non-scientists or even at times with other scientists. “All of the social science research suggests that this is just not true. This is not just a hunch on my part but there really is good evidence.”

Reid will explain the good evidence on how to navigate the tricky intersection of belief and science at an interactive workshop called “Talking About Evolution with Doubters” on Sunday, December 7, at the ASCB/IFCB Annual Meeting in Philadelphia. “What I’d like to do with the group is have them think about how they would talk to someone who thinks that evolution is a theory in crisis or that climate change is unsettled.”

Scientists want to jump to the science, which is understandable, says Reid, because that’s how they’ve been trained. “But to non-scientists, there is a tendency for people to feel talked down to by scientists. What the social science research shows is that scientists are considered knowledgeable but cold. They don’t score well on empathy. And when there’s little empathy, there’s no trust.” The first step in building empathy is to hold the PowerPoint slides and to listen. In the workshop, Reid says, “I want them to start thinking about how you really need to learn more about a person’s values and beliefs to develop a little trust and some understanding about where a person is coming from.” Listening is hard for scientists but it’s crucial to “earning the right to be heard,” says Reid.

“We all have a tendency to lock horns with the hardcore deniers—the creationists or the climate change deniers—but that’s a really small group of people and mostly you’re not going to be able to convince them. But there is a much larger group in the middle who have been exposed to this artificial controversy perpetuated by the press because that’s the American Way. There have to be two sides to any issue even if there aren’t two sides here, at least scientifically.” But before getting to the scientific issues, scientists have to take two factors into account, trust and ulterior motive, says Reid.

“This has been a major tactic of those who are trying to cast doubt on science,” says Reid. Suggesting that climate scientists are getting rich from their grants or that biologists are proselytizing atheists has been used effectively by climate change deniers and evangelical creationists. Ulterior motive can work both ways, says Reid, as was pointed out to her by none other than David Kessler, the former head of the Food and Drug Administration. Studies of the effect of anti-smoking public relations campaigns on teenager smokers revealed that nothing—not long-term cancer risk or cosmetic impacts such as yellow teeth or bad skin—worked as effectively as ulterior motive. “What they found to be effective in changing the minds of teenagers is when they said, ‘The tobacco companies are lying to you’.” Reid is not suggesting that biologists need to fight back by ascribing nefarious motives to those who harbor doubts about evolution. “I would not want this to come across as a need to attack this person’s motives. Quite the opposite; we need to understand that this person is approaching the issues exactly as you are. But we have to think differently about this than: ‘This is my freshman biology class and they’ll have to listen to what I’m saying to get an A’.”

Reid came to the NCSE last January from her post as Director at the American Academy of Microbiology and before that as Senior Program Officer at the National Research Council’s Board on Life Science. Even earlier, she was at the bench at the Armed Forces Institute of Pathology where she was part of the team that sequenced the 1918 influenza virus. Reid took over NCSE from Eugenie Scott, who retired after 27 years at the helm. Scott is still out on the hustings, speaking for NCSE through the end of this year while Reid gets oriented in NCSE’s Oakland office. The December ASCB/IFCB meeting looms large on Reid’s calendar as a major tryout for her new message. It’s not about the science, at least not at the beginning, says Reid.