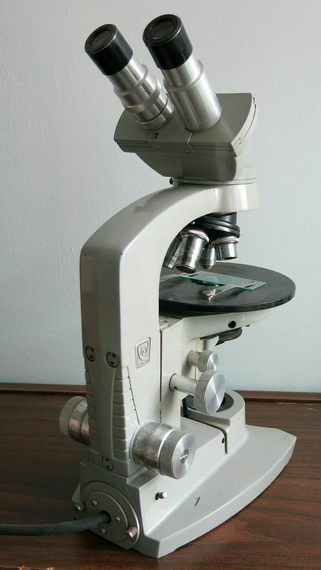 Under magnified examination, the new Congressional spending resolution has minuscule increases in NIH funding but a small but useful change in travel restrictions for NIH scientists and program officers. ASCB photo by John Fleischman. Microscope courtesy of Owen Gorski.

Perhaps it was the 2014 Nobel Prize in Chemistry awarded to William E. Moerner, Eric Betzig, and Stefen Hell for their work in superresolution imaging but just days after the three received their medals in Stockholm, Congress finally came to a resolution of its own, passing a funding bill to keep the federal government operating. While some of the provisions in the bill have been blown up in the press, several of importance to the basic biomedical research community need to be studied under magnification to be understood.

In federal terms, increases in the National Insitutes of Health (NIH) overall budget are, if not quite nanoscale, then very, very small—a rise of $150 million or just 0.5% over last year. The NIH National Cancer Institute did not receive any increase at all and the NIH National Institute of General Medical Sciences received only a 0.3% boost.

Yet tucked in on page 963, of a 1603 page bill, are five lines that will have a huge impact for the NIH community. Currently, regulations strictly limit travel by federal employees to conferences or meetings. Broad in scope, these restrictions have crippled the ability of NIH program officers and intramural investigators to attend scientific meetings, which are the lifeblood of science. And who doesn’t want their NIH program officer up to date with the current science?

The new bill finally makes a special distinction between travel on regular business and travel to attend scientific meetings, declaring “attendance at and support for scientific conferences shall be tabulated separately from and not included in agency totals.” Equally important, it separates each of the numerous agencies within the Department of Health and Human Services (HHS), treating them as independent agencies for the purposes of travel-related accounting. NIH travel budgets will no longer be combined with the travel budgets for other HHS agencies. This means that NIH will now have two travel budgets, one for normal federal business travel and one for attendance at scientific meetings.

The ASCB played a leading role in this. Hearing of the trouble NIH-based ASCB members and other federal colleagues were having in attending the ASCB Annual Meeting, the Public Policy staff worked behind the scenes, first explaining the unintended consequences of the new rules and then working with the Senate Labor, HHS, and Education Appropriations Subcommittee to find a solution. When the ASCB leadership went to Capitol Hill in June, this issue, along with the impact stagnant funding was having on the basic research community, was raised at every meeting with members of Congress and their staff. The message seems to have been heard.

With passage by Congress on Saturday night, the massive funding bill had jumped all but one of the hurdles necessary to become law—signature by the President.